There won’t as much blogging from my side this weekend because I’ll be participating in the so-called “Berlin Megamarsch” (Mega-Walk).

At the Berlin 100/24 Megamarsch, participants take on the challenge of walking 100 kilometers within 24 hours.

The fun starts Saturday, August 31, at 4 p.m. when some 1500 participants will begin following a marked route and will have to complete it before 4 p.m. the next day, Sunday. Here’s the route: 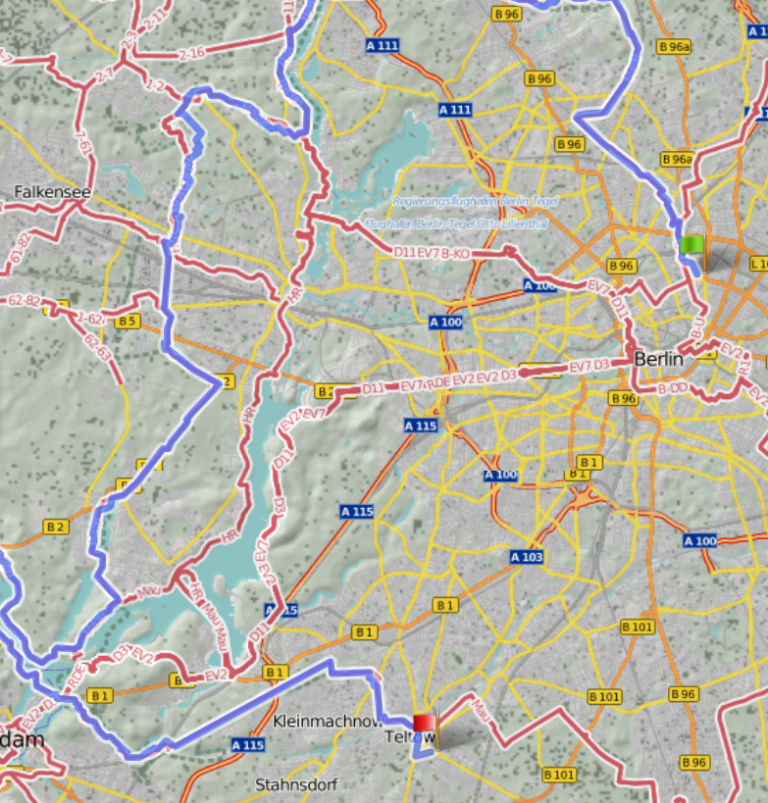 100/24 Megamarsch starts in Berlin Saturday at 4 p.m., goes overnight to Potsdam, before finishing on Sunday at Teltow.

Some five months ago a friend told me about it, and initially I thought the whole idea was insane. But another part of me became intrigued by the challenge and so on July 6th I completed the Düsseldorf 50k/12hr in 10.5 hours. As the 50k in Düsseldorf went pretty well, I decided to give the big Berlin 100/24 a shot.

Even though I’ve trained quite a bit, I still estimate my chances of success this weekend at less than 30%. What follows is my training list of walks done in order to prepare: 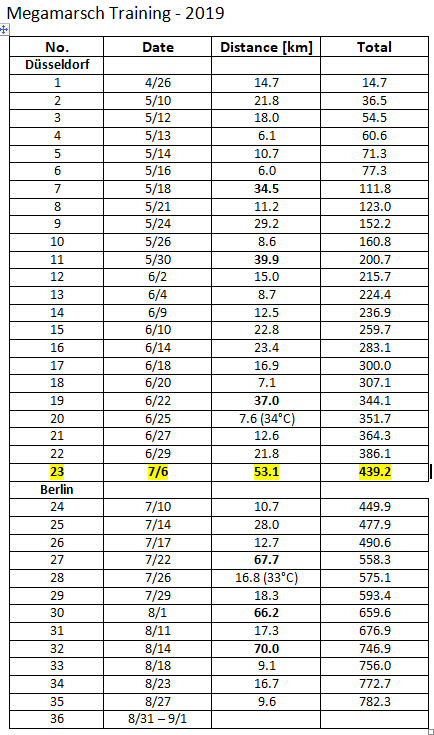 No. 23 was the Düsseldorf Megamarsch on July 6.

Since Düsseldorf I’ve walked 65+ km three times, but made the big mistake of not stretching enough after the 67.7 km walk on July 22. The result: plantar fasciitis. During my 66-km walk on August 1st I wound up coming home with my feet in agony.

For the last 3 weeks since, I’ve been stretching and trying to massage all the kinks out, yet I can’t say how my feet will hold up in Berlin. I can only hope for a good day.

I was also in agony at the end of the 70k walk on August 14. My left foot is still not in a condition I’d like it to be.

According to Megamarsch organizers, only 20-25% succeed in accomplishing the distance in under 24 hours. Most throw in the towel at 60 km.

In any case, que sera, sera. I’ll be posting progress reports at Twitter Saturday night and Sunday for those who might be curious as to how I’m holding up. I also need all the fans and support I can get!