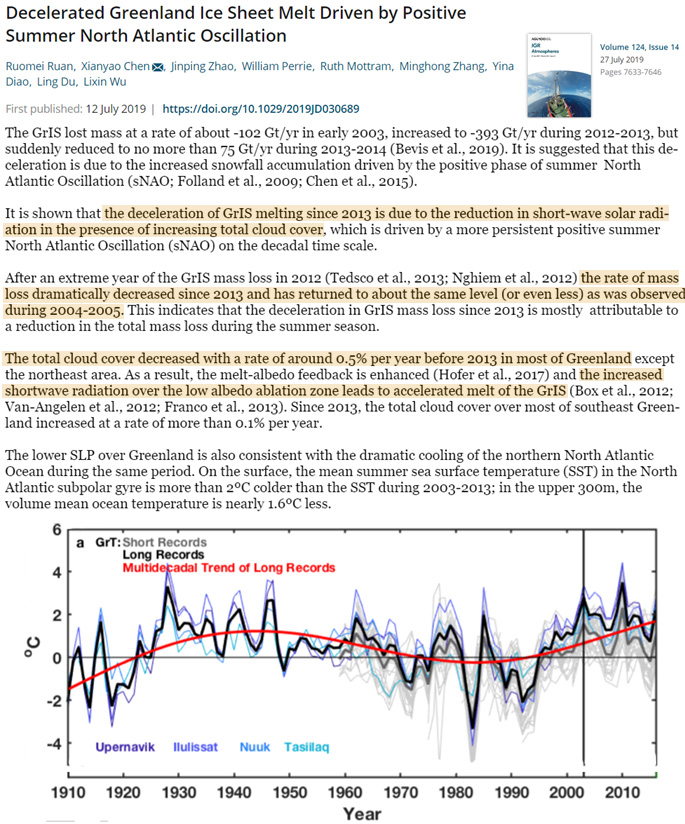 “It is shown that the deceleration of GrIS melting since 2013 is due to the reduction in short-wave solar radiation in the presence of increasing total cloud cover, which is driven by a more persistent positive summer North Atlantic Oscillation (sNAO) on the decadal time scale.”

“After an extreme year of the GrIS mass loss in 2012 (Tedsco et al., 2013; Nghiem et al., 2012) the rate of mass loss dramatically decreased since 2013 and has returned to about the same level (or even less) as was observed during 2004-2005. This indicates that the deceleration in GrIS mass loss since 2013 is mostly attributable to a reduction in the total mass loss during the summer season.”

“[T]he total cloud cover decreased with a rate of around 0.5% per year before 2013 in most of Greenland except the northeast area. As a result, the melt-albedo feedback is enhanced (Hofer et al., 2017) and the increased shortwave radiation over the low albedo ablation zone leads to accelerated melt of the GrIS (Box et al., 2012; Van-Angelen et al., 2012; Franco et al., 2013). Since 2013, the total cloud cover over most of southeast Greenland increased at a rate of more than 0.1% per year.”

“The lower SLP over Greenland is also consistent with the dramatic cooling of the northern North Atlantic Ocean during the same period. On the surface, the mean summer sea surface temperature (SST) in the North Atlantic subpolar gyre is more than 2ºC colder than the SST during 2003-2013; in the upper 300m, the volume mean ocean temperature is nearly 1.6ºC less (Fig. 6). The cooling of the ocean is not only helpful for the atmospheric configuration over the Greenland, but also favorable for the reduction of mass loss due to warmer water intrusion into the marine-terminated glaciers, though the latter process explains only around 30-50 Gt of the total mass budget of the GrIS (Zwally et al., 2002; Box et al., 2009; Tedstone et al., 2013).” 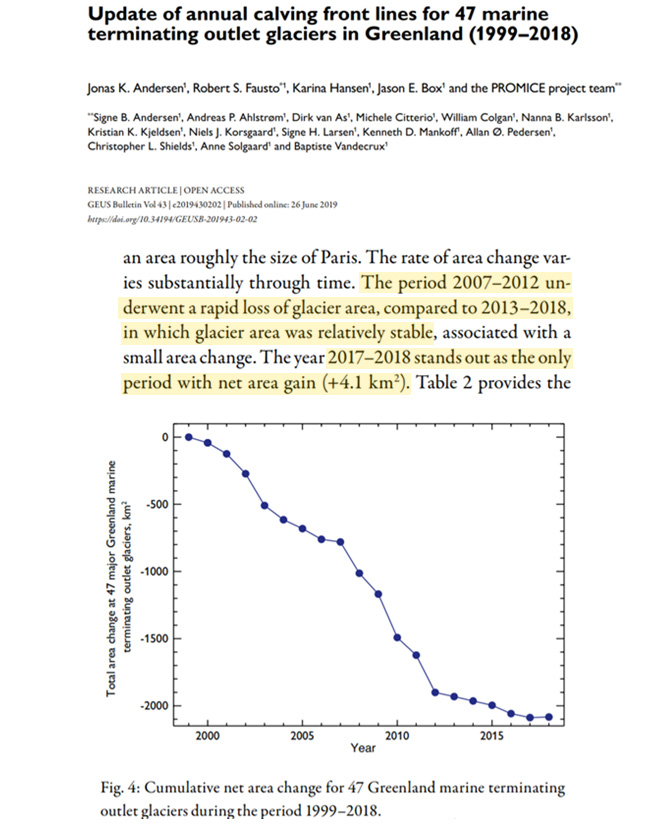