The “Green New Deal” is a multi-trillion-dollar plan proposed by Ocasio-Cortez in February of 2019 and backed by almost one hundred members of Congress, including most of the Democratic presidential hopefuls.

Among a slew of other sacrifices, the program would force our prosperous society to replace diesel and gasoline-powered vehicles with electric vehicles and meat eating with vegetarianism. Liberty would be replaced by stifling government regulation. 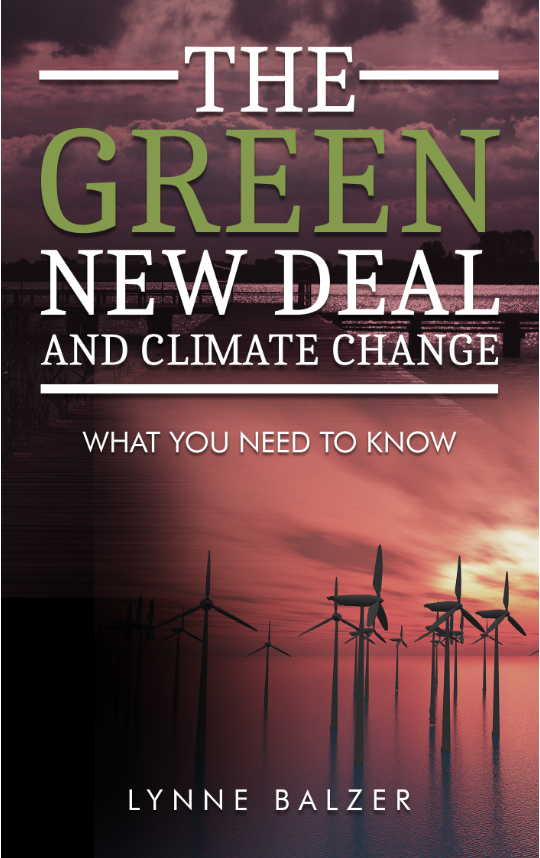 The Green New Deal And Climate Change – What You Need To Know explains why the “Green New Deal” is neither green nor scientific, and needs to be rejected.

Lynne Balzer’s new book The Green New Deal And Climate Change – What You Need To Know explains how the climate science that’s driving the radical policy initiatives is flawed, fraught with outright scientific fraud and how all the proposed green initiatives are in fact anti-green because they would end up irreversibly ravaging our environment.

This book details the 50-year history of climate change alarmism that began in the 1970’s with its dire warnings about global cooling caused by mankind and how that term changed first to “global warming” and then to “climate change” when the warming stopped.

None of the predictions, ten-year survival warnings or tipping points given during the past five decades has ever materialized.

Ms. Balzer, a schoolteacher from America’s heartland, presents compelling reasons why wind turbines, solar power and biofuels are not only impractical but would actually greatly damage the environment.  The book exposes the serious flaws in the science behind the entire manmade global warming scenario and the scientific impossibility that carbon dioxide, a trace gas, could be responsible for warming the planet.

Balzer explains how prominent climate scientists have been hiding data and attempting to destroy other scientists who disagreed with their claims.

The right antidote for the truant FFF school kids

The Green New Deal and Climate Change: What You Need to Know is essential reading for all voters and policy makers.

It’s also the ideal book for the FFF school-striking kids to read because it’s written by a schoolteacher in terms that are easily understood by laypersons.

Every responsible parent or grandparent needs to give this book to their children so that they will be able to view the climate issue critically, calmly, rationally and objectively.

Ms. Balzer’s book concludes that the energy “solutions” specified in the Green New Deal are neither green nor sustainable and that so-called renewable sources of energy, such as wind and solar power and biofuels, are not only impractical and economically devastating, but also very damaging to the environment.

The “Green New Deal” is one social engineering lesson we’d be far better off going without.

Lynne Balzer taught science on the high school and college levels over her career. A project director for Faraday Science Institute in Oklahoma, she has researched this issue for years.