EIKE informs they managed to find an appropriate place in Munich, on time and that all the reservations as well as dates remain valid. Unfortunately, for safety reasons, they have to keep the location secret. Free speech in Germany! (But only if you do it in secret).

Just like the 1930s. There’s no question that freedom of science and speech are under heavy attack in Germany after dozens of distinguished but dissenting scientists have seen their long planned science conference cancelled due to intimidation by leftwing extremists. 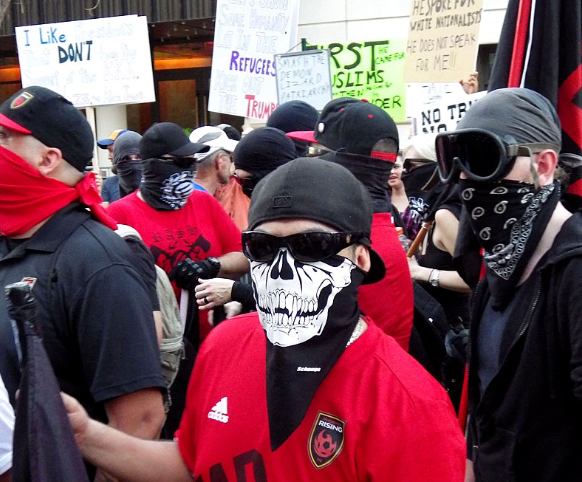 Germany caving in to leftist extremists. A skeptic climate conference gets cancelled at last minute due to coercion. Image: Antifa action in Phoenix, 2017, cropped from Carptrash – I, Einar Kvaran, License: CC BY-SA 4.0

The same has also just occurred at the famed University of Göttingen.

The problem of suppressing open discussion has deteriorated to such an extent across Germany over the recent years that even according to leftist Spiegel: 75% of journalists and writers are “very concerned” or “somewhat concerned” about the state of free speech in Germany!

Free speech in Germany is in state of crisis.

The latest free speech suppression and intimidation has unfolded in Munich: The 13th International Climate and Energy Conference, sponsored by the European Institute for Climate and Energy (EIKE) and CFACT, has seen its contractual agreement torn up, and the event was booted out of the conference facility at the last minute.

According to EIKE spokesman, Prof. Horst-Joachim Lüdecke, “a left-green mob” pressured the hotel management of the NH Congress Center in Munich(Aschheim) “to illegally cancel the accommodation contract”.

EIKE had gone to court and demanded revocation of the termination in an emergency motion. However, today, a Bavarian court ruled in favor of the NF Conference Center, citing “security reasons”. German law is no longer able to protect.

EIKE is a non-profit organization, like the Potsdam Institute for Climate Impact Research (PIK). The Jena-Germany based EIKE plans every year a scientific conference on current climate and energy topics. This year it was planned to take place in Munich on November 22nd. But now its attendees will have to make new last minute plans.

More than 200 scientists and attendees had booked, many paid

More than 200 international scientists and experts had long since booked and paid for their travels, as well as their hotels – many of them in the conference hotel NH Congress Center itself. Some of them were planned to come from overseas, the USA, Canada and Australia. Media representatives also asked to be accredited, this year much more than usual.

Distinguished scientists were to appear

But the problem is that the 13th International Climate and Energy Conference is one that allows alternative – NON-ALARMIST – views on climate science to be presented, for example by distinguished scientists such as astrophysicists Nir Shaviv of Israel and Prof. Henrik Svensmark of Denmark. More than a dozen were slated to speak.

However, this open scientific discussion was too much to take for the far left-green Antifa and other like-minded radical organizations. This time they really mobilized against the “climate change deniers”.

At its Facebook site the radical leftwing Antifa organization recently called on its followers to take aim at the Munich NH Congress Center for hosting the EIKE event, posting at its site the following comic image: 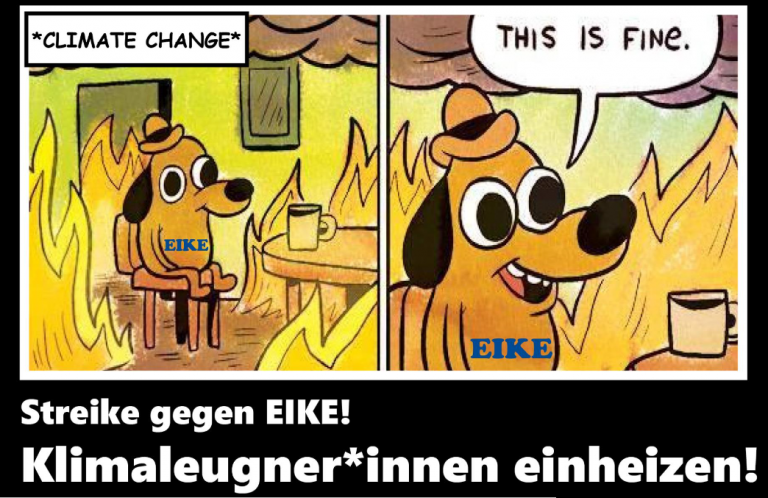 EIKE has published scientific works and peer-reviewed publications and is involved in the promotion of scientific education. The conference was intended to continue extend this work.

The agreement to host the conference at the NH Congress Center Munich was duly signed by both parties already back in May and was followed shortly afterwards by a “substantial down payment”, according to EIKE. Everything was settled. Then came the science brownshirts.

The initial spark setting off the protest of the NH Congress Center Munich (Aschheim) hosting the EIKE climate conference was launched by editor Paul Gäbler of the Berliner Tagesspiegel, who publicly slandered EIKE as an “AfD-near climate denier think tank”. The AfD is Germany’s new and growing right party that has has been surging in recent polls and elections nationwide. It’s the only party in Germany that challenges alarmist climate science and acknowledges natural climate drivers.

In September, Gäbler called the management of the NH conference hotel and asked if the positions of EIKE were known to them.” At first NH management declined to comment, but “journalist” Gäbler persisted and the NH caved in, issuing a delcaration: “Denial of man-made climate change is not compatible with the values of the NH hotel group.” and said it would review the matter.

But it remained quiet for a while. Requests by EIKE as to whether the accommodation contract was endangered remained unanswered on the part of the NH management in Berlin. But then NH management panicked after Munich Antifa and auxiliary groups from the environmental scene mobilized. On November 9th, a mob of 15-20 people appeared inside the hotel and disturbed guests and employees.

They mixed in with the guests in the lobby and distributed a flyer to employees and guests, announcing further activities in case the conference took place.

According to the hotel management of the NH Congress Center in Munich (Aschheim), they apparently “forced” them to cave in “by singing songs and distributing leaflets”.

At about the same time, an open letter from the Munich Environmental Institute was sent to the NH Munich Conference Center management demanding they not make conference rooms available to EIKE. 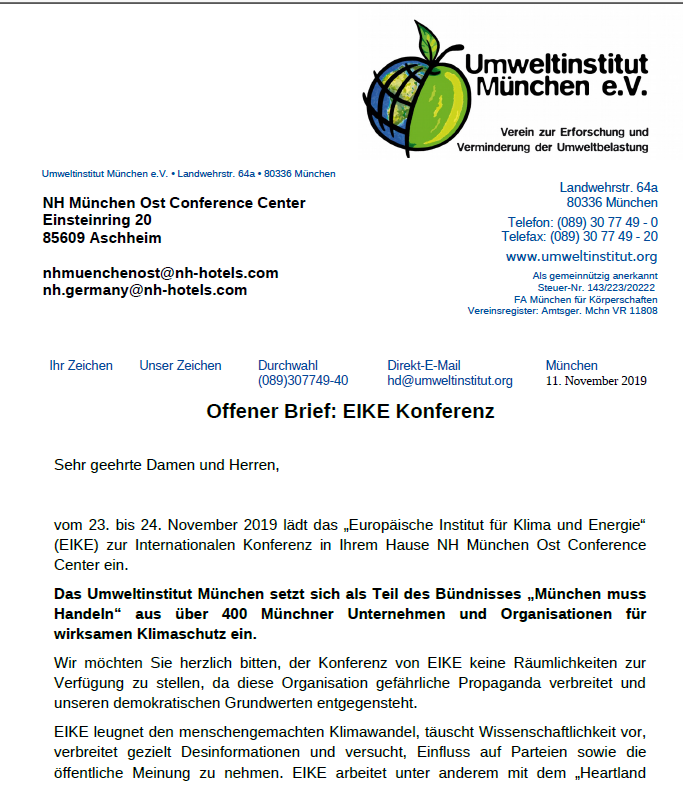 The letter begins by telling the NH Munich Conference Center how influential the Institute fancies itself to be, and claims “EIKE denies man-made climate change and is trying to influence political parties and public opinion.”

The letter ends by demanding the NH Munich Conference Center management  “not provide the climate change deniers any space.”

Thus the NH management terminated the contract (in spite of the previously granted contract extension) due to a perceived “danger to its guests and employees.”

The Berliner Tagesspiegel (TS) reported triumphantly at the news: “NH hotel group disinvites EIKE, climate change deniers have to find a new venue,” was the triumphant headline in the leftist Tagesspiegel.

“This is comparable to the behaviour of arsonists who first set a fire and then proudly report about it,” commented EIKE.

All attempts by the EIKE Board to avert the contract cancellation, which was demonstrably based on defamation and lies, did not alter the NH Conference Center decision. EIKE took immediate legal action against this, hiring well-known law firm Steinhöfel, but to no avail. The conference is cancelled.

German rule of law is failing

At its site, EIKE called the coercion and intimidation to force NH to shirk its contractual obligations a “particularly serious case of coercion and blackmail for the suppression of scientific facts.”

“If the rule of law still works in this country, the court should make a decision in our favour,” EIKE wrote.

No longer a constitutional state

With that, the German court has de facto ruled it can no longer protect and uphold the rights of persons to dissent and to speak freely. The court ruling sends a dangerous signal to radical leftwing organization, hinting to them s that it’s open season on dissenters.

On the brink of leftist anarchy

The last minute, sudden cancellation by the Munich NH also results in hefty damages to a number of parties involved in the conference. “Travel expenses have now been spent in vain,” EIKE says. “Perhaps the NH-Conference Center would even come to its senses, recall the rule of law and bring charges against the Antifa (Unknown).”

Caving in to extreme leftist pressure sends the wrong signl, EIKE warns. “The reputation to have given way to the pressure of the street will perhaps deter more future visitors of the NH Conference Center than visitors who have apparently forgotten where it leads if fascists of all colours, whether left, green or brown, are not fought with all means of our constitutional state and immediately brought before the judge.”