It turns out that the 1974/75 bush fires were considerably larger in area than the 2019/20 bush fires we have been witnessing. 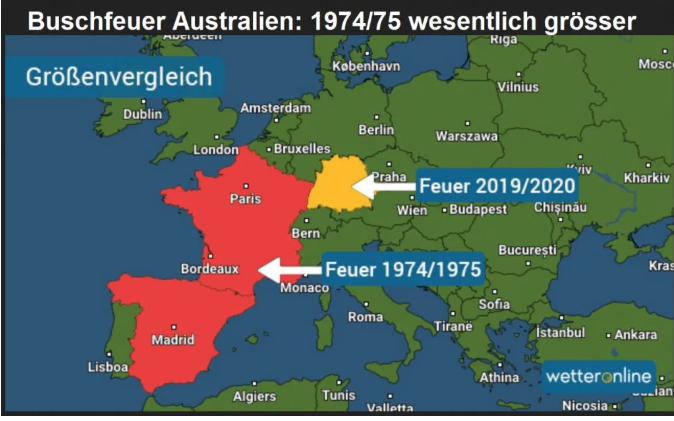 The Australian bush fires of 2019/20 have seen an area as big as southern Germany (see above). But in 1974/75, they covered an area as large as France and Spain combined! Source: www.wetteronline.de.

On the completely exaggerated climate alarm in the German media on the current bush fires in Australia, a pleasantly objective report from WetterOnline: ‘In the summer of 1974/1975, an area in Australia burned to the tune of about the size of Spain and France. For the sake of perspective: Bush fires are generally nothing unusual in the Australian summer. Often large areas are affected. The last time a huge fire raged was in February 2009. The so-called Black-Saturday-bush fires killed over 170 people and destroyed 1800 houses. […] Since the beginning of the great bush fires in October 2019, more than 100,000 square kilometres of land burned throughout Australia, which is roughly the size of Bavaria and Baden-Württemberg combined. Thousands of houses were destroyed.'”

Bavaria and Baden-Württemberg have a combined area of around 105,000 square kilometers, so there’s no doubt this season’s bush fires have been devastating.

But WetterOnline reminds Australia has seen much worse:

In the summer of 1974/1975 the flames burned over an area of about one million square kilometers. This corresponds to an area about three times the size of Germany.”

That means an area that is nine times greater than what has been affected this year! Back in 1975, however, atmospheric CO2 concentrations were BELOW the “safe” 350 ppm.