A recent paper published in the Swedish journal Geografiska Annaler: Series A, Physical Geography authored by Holmlund and Holmlund, found that the strongest melts of the Storglaciären in Sweden occurred between the 1930s and 1960s.

The glacier mass then even increased from the early 1970s to the mid 1990s.

According to the authors, geodetic volume estimates of Storglaciären in Sweden suggest a 28% loss in total ice mass between 1910 and 2015, but the greatest part of the melt occurred in the mid 20th century – a time when CO2 levels were deemed to be at a safe level.

The authors used terrestrial photographs of Tarfala valley, where Storglaciären is situated, from 1910 to allow an accurate reconstruction of the glacier’s surface, past volume and mass. They found say that the likely start of a melting trend is supported by imagery from 1922, which shows almost no snow was present on top of Storglaciären, and other glaciers showed tendencies of retreat.

The mass change of Storglaciären stabilized and even contained periods of increases in mass after 1970, their analysis shows.

Arctic sea ice stable over the past 10 years

It appears Arctic ice melt has slowed down over the recent decades, and has not accelerated like global warming alarmists like to claim.

Over  the past 10 years, Arctic sea ice minimum has not fallen in over a decade: 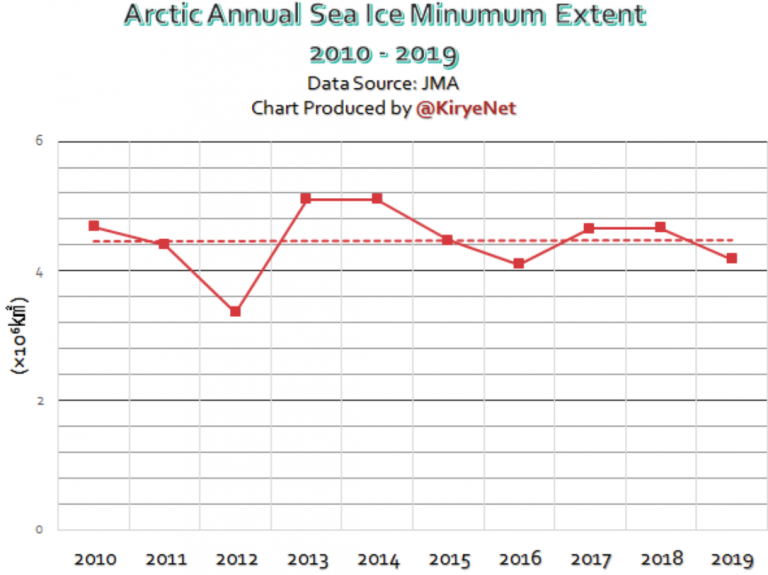