Roland Tichy’s site here reports that although car traffic in the German city of Stuttgart has decreased significantly due to COVID-19, the drop in NO2 content has only been “slight”.

So it cannot be the evil diesel engine cars that are “choking” our cities. 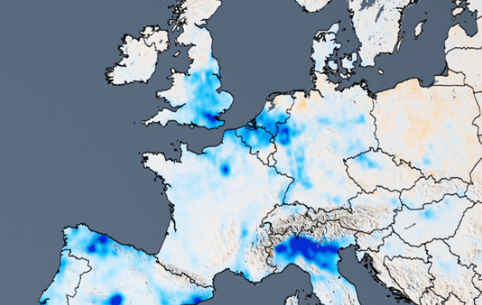 “The Corona crisis is bringing it to light: car traffic has decreased significantly, but the air quality in city centers has hardly changed,” Tichy comments.

Recall that a major reduction of diesel engines was supposed to improve air quality. After all, experts at the Baden-Württemberg State Institute for the Environment (LUBW), for example, have attributed a large 80 percent share of air pollutants especially to diesel vehicles – so they have to be banned soon.

Yet Tichy notes: “If this is true, the ‘shutdown’ would have to have a drastic effect. But it does not.”

It turns out that the involuntary “corona experiment” with its widespread stop of car traffic has exposed bare the false claim made by environmental activists: Diesel cars are responsible for polluting the air of German cities.

According to Tichy, the “Corona Experiment” exposes just how pointless driving bans issued by the green transport ministers can be. “They obviously have no effect on the NO2 concentrations in the air.”

“The measured values, for example, at the Am Neckartor station in the Stuttgart city center were already below the limit value of 40 µg/m3 in February and March, ” writes Tichy. “At that time, traffic was still flowing and ‘shutdown’ had not yet been announced.”

Tichy adds that engineer and measurement expert Martin Schraag accuses proponents of car bans of data “manipulation” and reminds that today’s “newer vehicles and those retrofitted with software updates hardly emit any exhaust gases. This should also have been reflected in the results.”

Schraag notes that NO2 values fluctuate strongly and depend heavily on Stuttgart’s weather conditions and wintertime  heating can be the cause.

“The weather, if you look at the data, has a decisive influence,” Tichy comments. “The experts of the LUBW environment office obviously did not care about these influences and officially know nothing about them. They still assume that traffic accounts for 80 percent of air pollutants.”

At a loss for words

Now they are facing difficulties in explaining the situation. As Schraag suspects, the 80 percent figure cannot be correct if there are significantly fewer cars on the road and yet the values have not changed.

The Bavarian State Office for the Environment also confirmed that the air pollutants in the city of Würzburg – hometown of former NBA superstar Dirk Nowitzski – had hardly changed either although traffic has decreased significantly.