Glacier surges of 100s of meters within mere months have been occurring throughout High Mountain Asia (the Karakoram region, especially) for decades, even centuries. It’s the Karakoram “anomaly”, and it’s thought to be “natural”. So why are the regions where glaciers are retreating thought to be responding to unnatural climate changes?

“The January 2018 to September 2019 surge of Shisper Glacier, Pakistan, detected from remote sensing observations … The glacier surface velocity profiles indicate that the ablation zone of the glacier continues to be in an active surge phase resulting in advance of the snout and expansion of the ice-dammed lake. Surface glacier velocities are as high as 48 m d−1. Between 18 December 2018 and 8 May 2019, the glacier snout advanced at ~6 m d−1 with a total overall advance of 860 m. The lake formed due to damming of an outflow stream from Mochowar Glacier expanded to its maximum area (29.69 ha) in May 2019 before drainage started on 23 June 2019.” 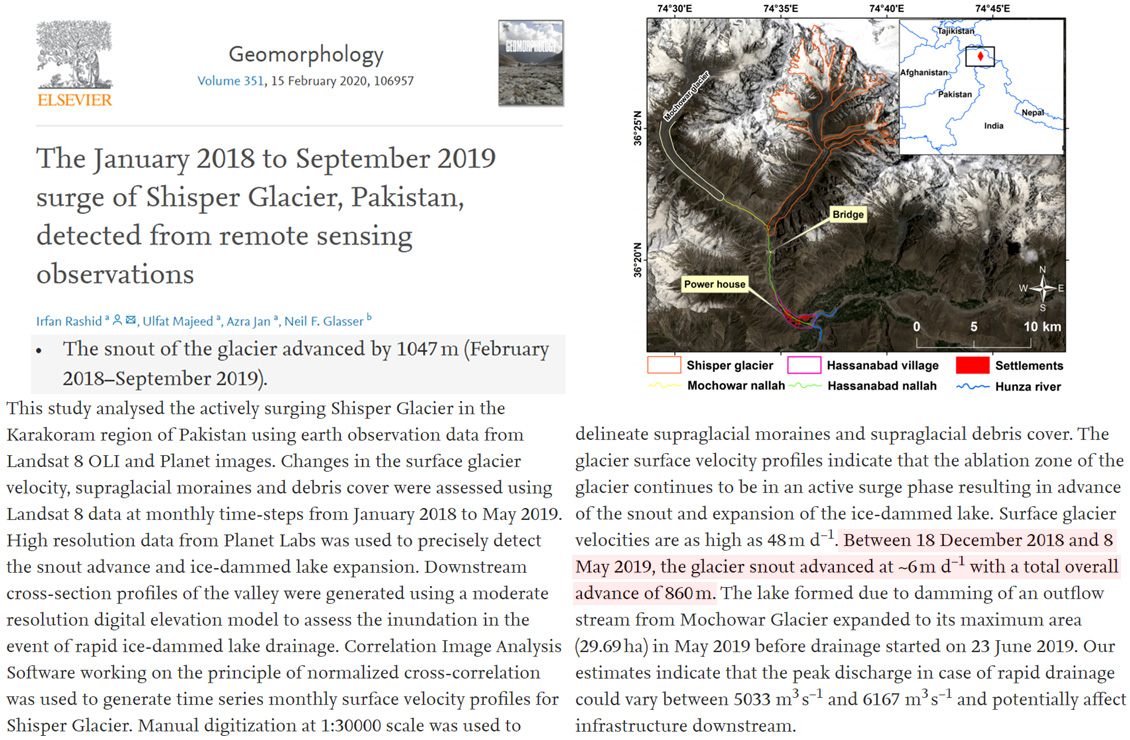 “In 2017–2019 a surge of Shispare Glacier, a former tributary of the once larger Hasanabad Glacier (Hunza region), dammed the proglacial river of Muchuhar Glacier, which formed an ice-dammed lake and generated a small Glacial Lake Outburst Flood (GLOF). Surge movement produced the highest recorded Karakoram glacier surface flow rate using feature tracking (~18 ± 0.5 m d−1) and resulted in a glacier frontal advance of 1495 ± 47 m. The surge speed was less than reports of earlier Hasanabad advances during 1892/93 (9.3 km) and 1903 (9.7 km). Surges also occurred in 1973 and 2000–2001.” 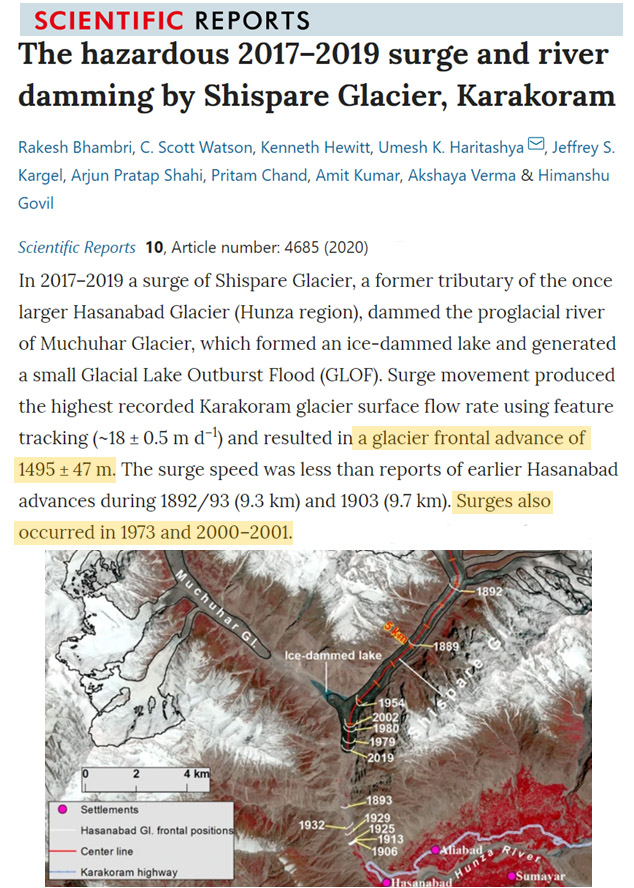 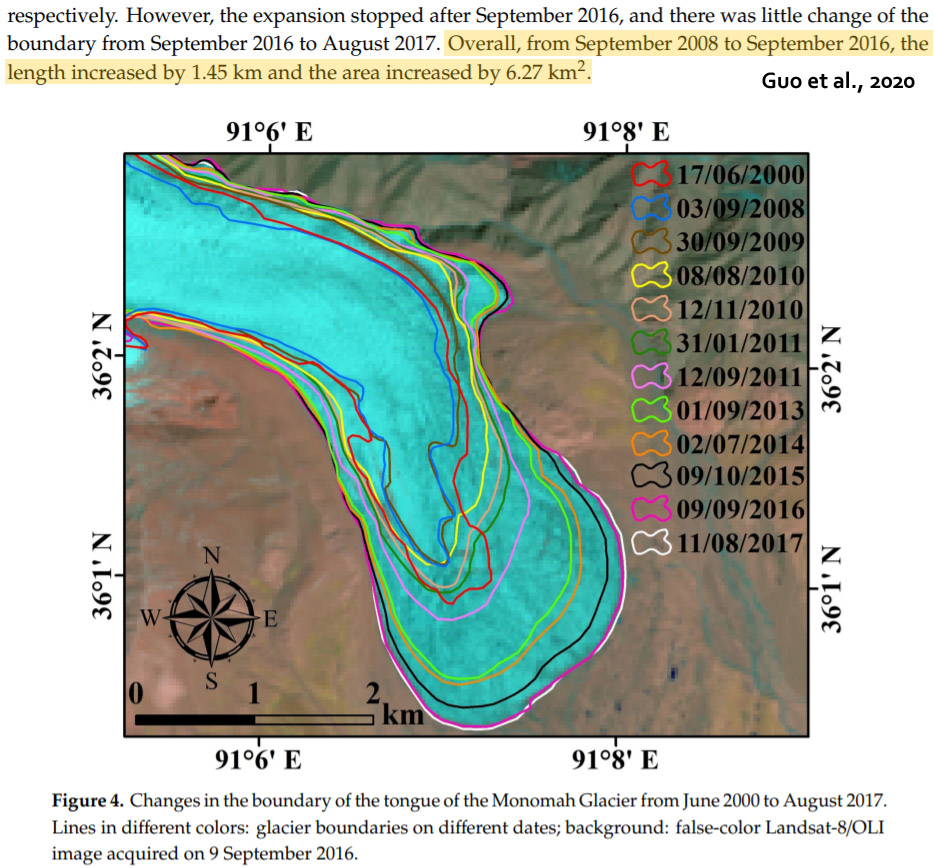 Glacier advance in the Karakoram region occurs in natural cycles

4. The “Karakoram Anomaly” – where some glaciers in the Western Himalayas surge and advance as other regional glaciers retreat – has been cycling for at least 200 years. The last glacier advance/surge cycle occurred in the 1950s to 1960s.

“A major outcome of this analysis is that most of the glaciers that have surged recently, have also surged in the 1950 to 1960s as surge cycles are often in the 40 to 60 year range. Combined with further evidence of previous surges, it seems that the so-called ‘Karakoram Anomaly’ is around since at least 200 years. It is also shown that two glaciers that are listed as surging are only expanding, that flow blocking of tributaries plays an important role for several surges, that surging glaciers are mostly free of debris, and that surges show a great variability in regard to surge durations (from 2 to 50+ years) and surge cycles (from 20 to 80+ years).” 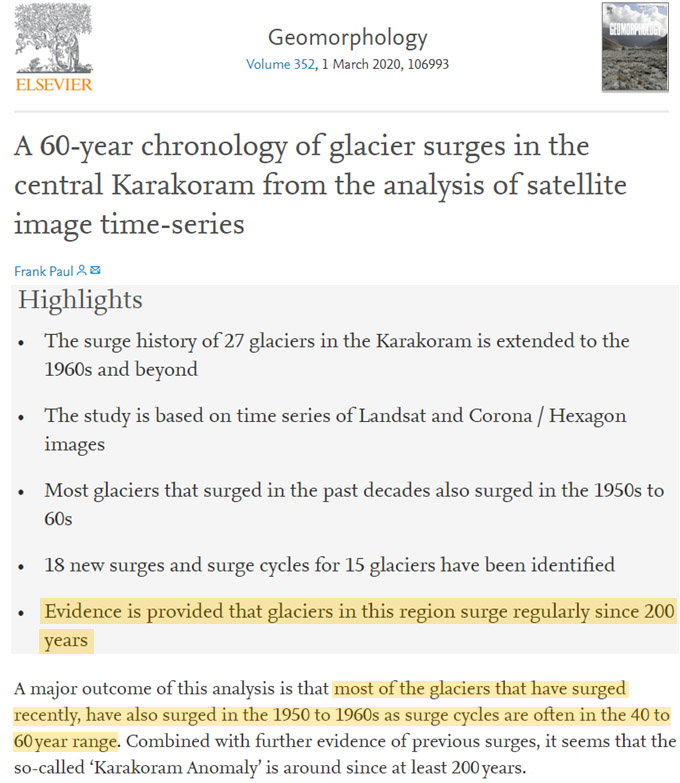 5. The “Karakoram anomaly” is a “natural phenomenon”.

“The contrasting hydroclimatic changes in the Karakoram region and the western Himalaya, as inferred from the glacier mass balance data, are based on the observations of the past few decades. However, our study shows the persistence of contrasting hydroclimatic variability over the past millennium (Figure 3d and 3e), which indicates that the ‘Karakoram anomaly’ is part of natural variability. … This study indicates that the ‘Karakoram anomaly’ is a natural phenomenon and is probably caused by spatially varying hydroclimatic trends in HMA [High Mountain Asia].” 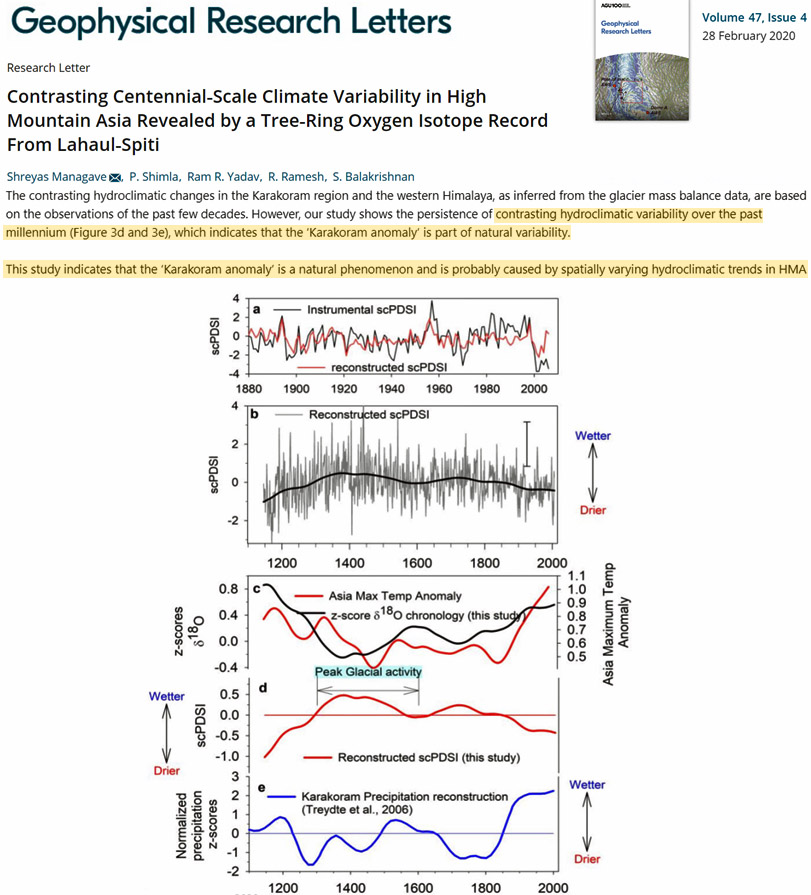 If glacier advances occur in cycles and are considered natural, this begs the question: Why are the cycles or trends of glacier retreat considered to be an unnatural result of human-induced climate change?

The answer may be that neither glacier retreat nor advance is a consistent consequence of an “external climatic trigger” after all (Brinkerhoff et al., 2017). Instead there may be a “cycle of advance and retreat in the absence of externally imposed climate change” because…

“…interactions between ice flow, glacial erosion, and sediment transport drive these cycles, which occur independent of climate variations. Water availability controls cycle period and amplitude, and enhanced melt from future warming could trigger advance even in glaciers that are steady or retreating” 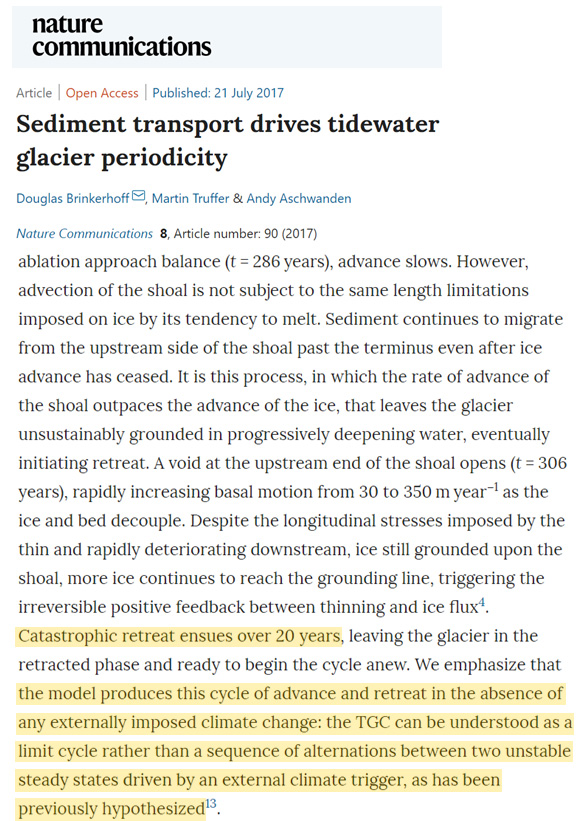 The lack of a clear climate change signal could explain why researchers (McNabb and Hock, 2014) found in a study of 50 Alaskan glaciers from 1972-2012 there was…

“…no corresponding change in the number of glaciers retreating nor do we see corresponding acceleration of retreat rates. To the contrary, many glaciers in the region have advanced…” 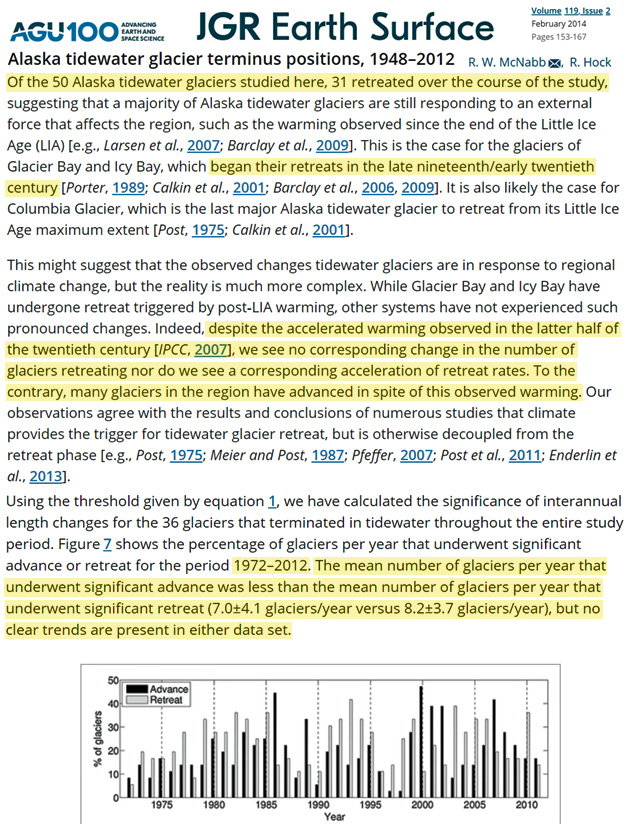 South of Alaska are three of the United States’ largest glaciers in one single location: Mount Rainier, Washington.

One glacier is retreating, another is stable, and the third glacier has thickened and advanced.

“The north and east slopes of Mount Rainier, Washington, are host to three of the largest glaciers in the contiguous United States: Carbon Glacier, Winthrop Glacier, and Emmons Glacier. Each has an extensive blanket of supraglacial debris on its terminus, but recent work indicates that each has responded to late twentieth- and early twenty-first-century climate changes in a different way. While Carbon Glacier has thinned and retreated since 1970, Winthrop Glacier has remained steady and Emmons Glacier has thickened and advanced.”

It is not reasonable to conclude a retreating glacier is responding to human-induced warming, whereas nearby stable and advancing glaciers are responding to natural variability.

11 responses to “5 New Studies: High Mountain Asia Glaciers Are Advancing, Surging…And This Is A ‘Natural Phenomenon’”