The latest NCEP GFS global temperature anomaly plot shows a sudden cool down is expected for the globe by May 6, with a downward trend since the beginning of the year. Hat-tip: Snowfan. 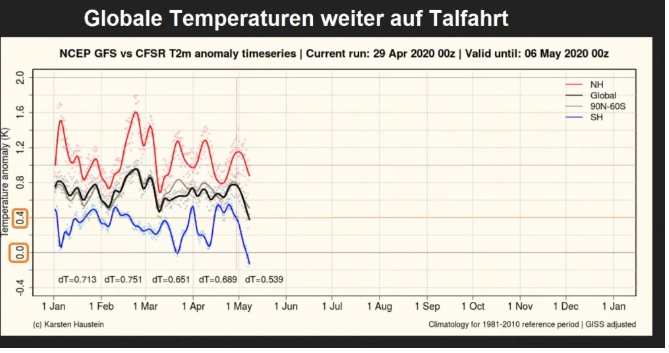 Meanwhile some models are now suggesting La Niña thresholds could be met by September 2020, which would further cool the globe.

Yesterday we looked at the North and South Poles and saw there are few signs of continued warming, and that polar ice has remained steady for a decade. At Antarctica, sea ice has even trended upward over the past 40 years.

Japanese blogger Kirye has also looked at the untampered March data of 12 stations in Alaska from the Japan Meteorological Agency (JMA). Examined were the stations for which the JMA had sufficient data. The plot of the 12 stations follows:

Seven of 12 stations in Alaska have had a cooling trend for March since 1983!