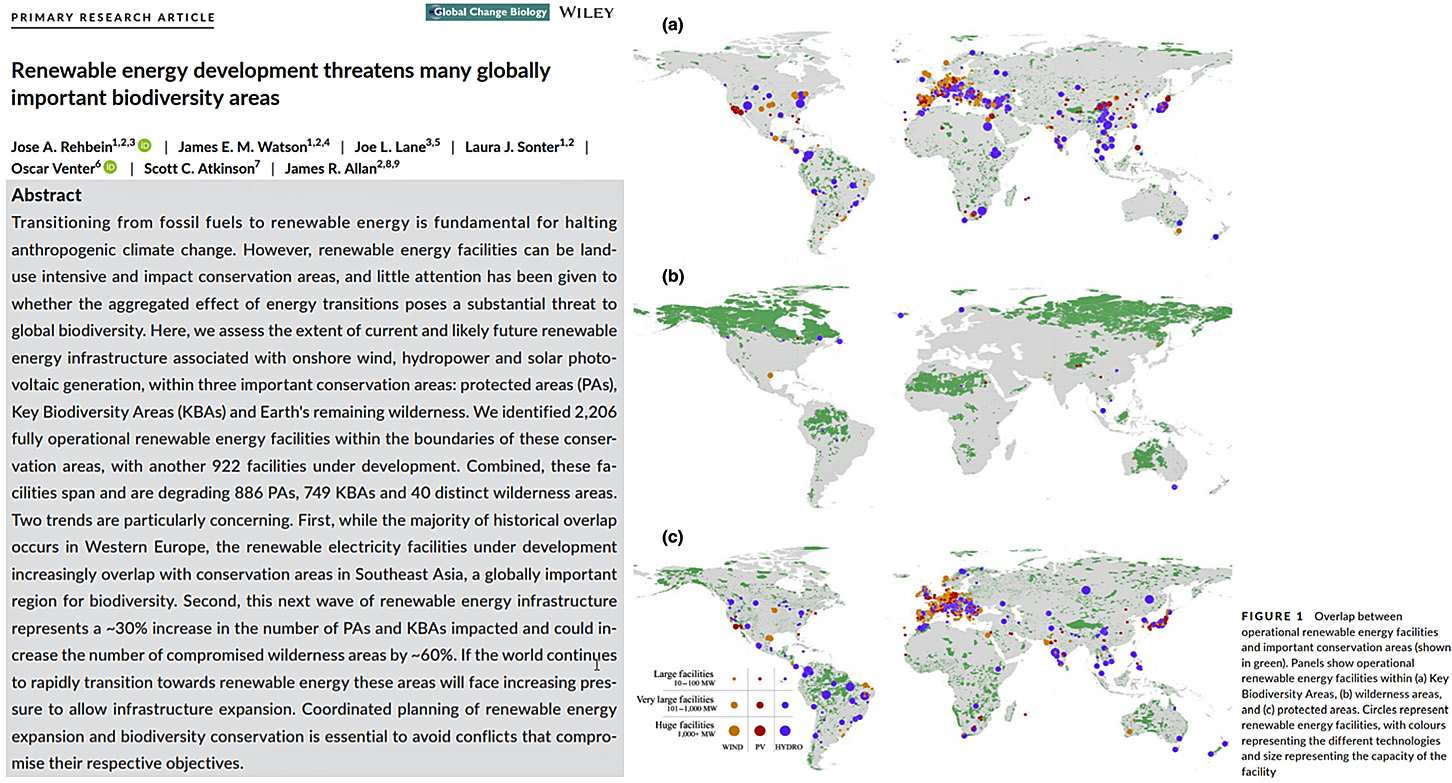 Even more concerning, the number of active renewable energy facilities inside important conservation areas is poised to increase by ~42% by 2028.

To avert climate climate change, the United Nations demands a 10-fold increase in renewable energy by 2060. This emphasis will especially occur in developing regions like Southeast Asia and sub-Saharan Africa, where the most biodiverse regions in the world are the most threatened.

“[R]enewable energy facilities can be landuse intensive and impact conservation areas, and little attention has been given to whether the aggregated effect of energy transitions poses a substantial threat to global biodiversity. Here, we assess the extent of current and likely future renewable energy infrastructure associated with onshore wind, hydropower and solar photovoltaic generation, within three important conservation areas: protected areas (PAs), Key Biodiversity Areas (KBAs) and Earth’s remaining wilderness. We identified 2,206 fully operational renewable energy facilities within the boundaries of these conservation areas, with another 922 facilities under development. Combined, these facilities span and are degrading 886 PAs, 749 KBAs and 40 distinct wilderness areas.”

“Our results show that renewable energy development has already encroached on many of the world’s most important places for conserving biodiversity, with 2,206 facilities already operational within PAs [protected areas], KBAs [key biodiversity areas] and wilderness areas (Figure S2). Furthermore, the number of active renewable energy facilities inside important conservation areas could increase by ~42% by 2028, suggesting conflicts will likely intensify in the near future.”

“This is especially worrying, when assessments show the growth required to achieve the UN climate targets by 2060 (Bauer et al., 2017; IEA, 2017b) would be an order of magnitude greater than the installed capacity included in our ‘operational’ and ‘under development’ datasets.”

“Our results also show that the spatial distribution of overlaps is moving from developed regions towards more biodiverse developing regions such as Southeast Asia and sub-Saharan Africa, where the consequences for global biodiversity conservation will be more intense.”