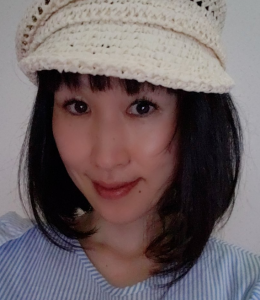 Today we post before-and-after mean annual temperature charts for 6 US stations in the midwest region with a low brightness index (BI), meaning low impact from the urban heat island (UHI) effect, which arises from widespread asphalt, concrete and infrastucture.

The low BI index tells us that the stations are sited in a rural-type environment. Five of the six stations have a BI of 0, while one (Thibodaux, LA) has a relatively low BI of 11.

Shown will be comparisons of NASA GISS Version 4 unadjusted, versus Version 4 adjusted. In each case the unadjusted data showed a cooling or little warming, while the adjusted data all ended up to show warming.

First we plot the station at Plainville, Kansas, which I already posted at Twitter. Shown is the plot going back over 100 years, before NASA adjustments and after adjustments.

As the 2 plots show, the data from the past were changed by NASA and made cooler. The new result: a warming trend! In other words, a cooling climate was fudged into one that is supposedly warming.

Next we move to the station of Hobart, Oklahoma. A slight cooling trend there was transformed by NASA into a warming trend: 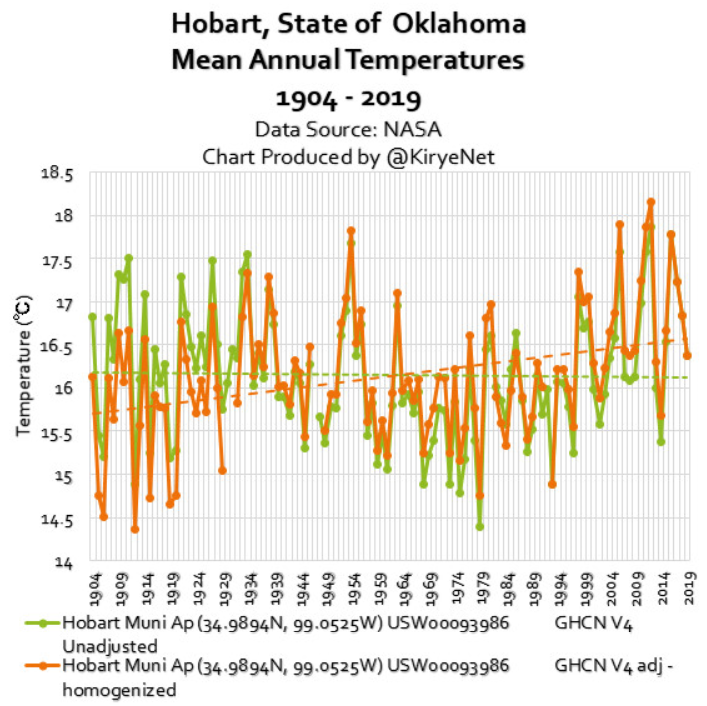 The third station we look at is Carrizo Springs, Texas: 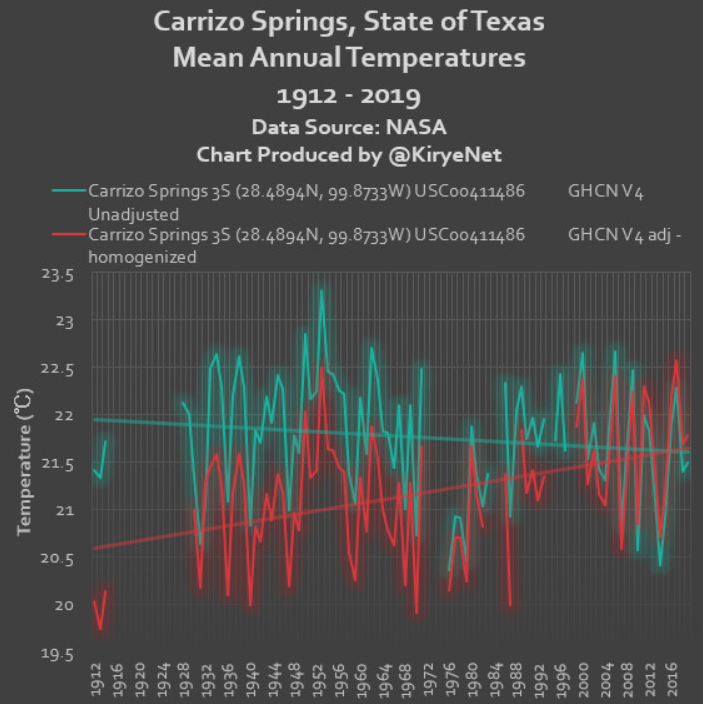 Originally in the V4 unadjusted, the past at Carrizo Springs was warmer than today. But NASA didn’t like that, and so they adjusted the temperatures from earlier in the 20th century downward. Again a modest cooling trend was changed into warming.

The story is the same at the station at Conception Missouri: 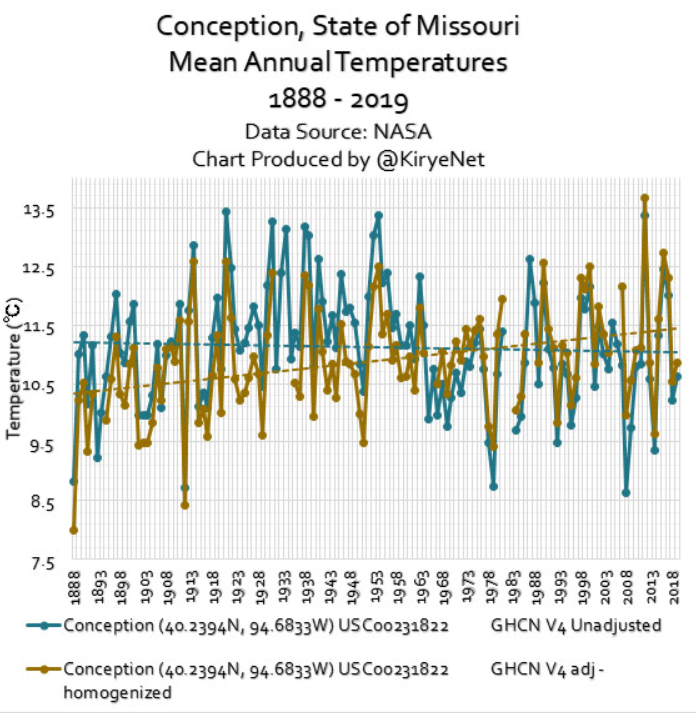 At Conception, Missouri, we originally saw no warming over the past 130. years. But then NASA fiddled with the data and now tell us there’s been warming at there as well.

Looking at the temperature charts for the station at El Dorado, Arkansas: 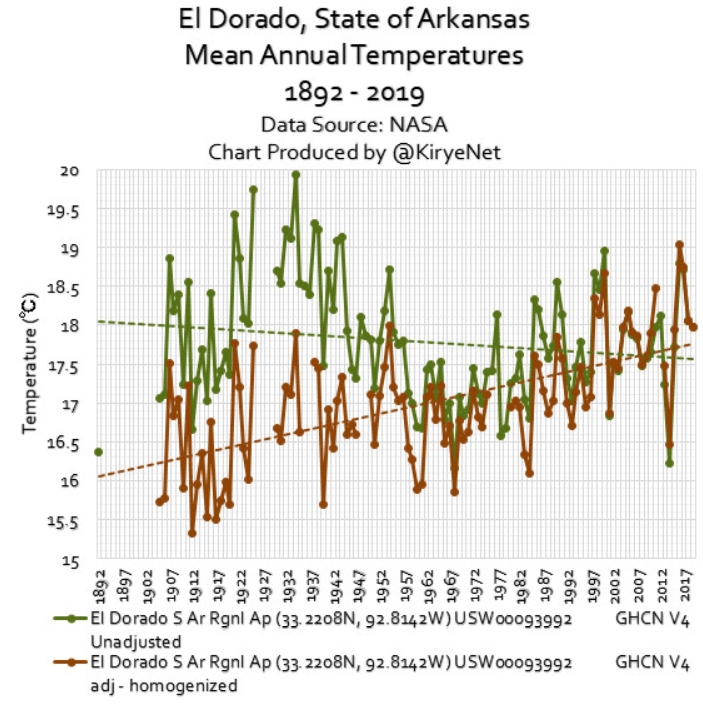 Note how warm it was in the 1920s. But NASA said that this couldn’t be right, and so cooled the mean annual temperatures in the early 20th century byalmost a whopping 2 degrees! Result: (fake) warming!

Finally we plot the NASA GISS data from the station located at Thibodaux, Louisiana – i.e. the U.S. South: 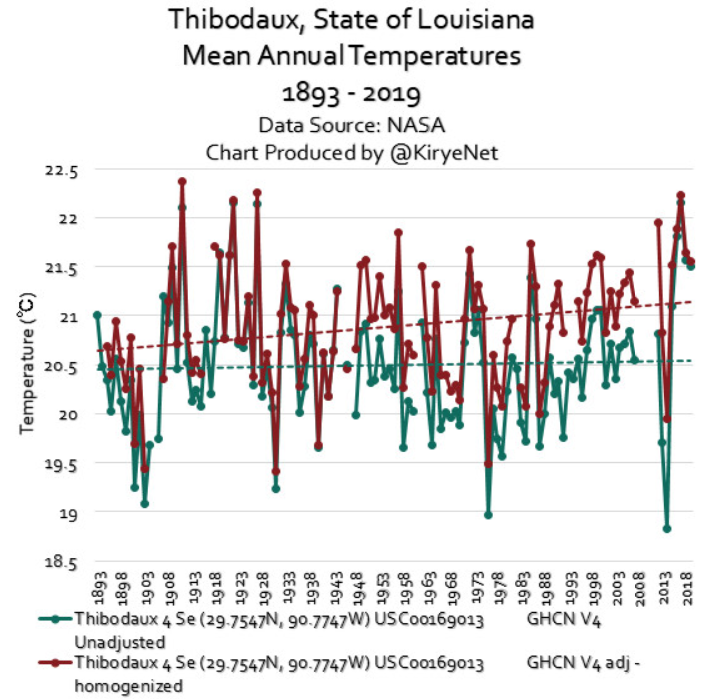 Above we see how the unadjusted V4 data were changed to create more warming.

NASA changed the data several times until they got the warming they want to us believe is taking place. The original data tell us there has been any real warming over the past century at these 6 stations.