Browse: Home / 2020 / September / 07 / Scientists Just Discovered Their Past Carbon Budget Guesses Have All Along Been Twice As Wrong As They Thought

A new assumption about carbon budgets reveals climate scientists have been vastly underestimating (by a factor of 2) the amount of carbon absorbed by the ocean for decades. Every past carbon budget estimate has been twice as wrong as the current estimate.

When it comes to the ocean heat fluxes and source vs. sink carbon budget estimates, climate scientists have been providing little more than educated guesses for decades.

For example, climate models have long suggested the ocean heat fluxes may only vary around 1 W/m². But “objective” analyses of oceanic latent heat flux (LHF) using different assumptions (equations) reveals fluxes were likely closer to 10 W/m² during 1981-2005 (Yu and Weller, 2007). So our modeled guesses were off by a factor of 10 compared to newer analyses. 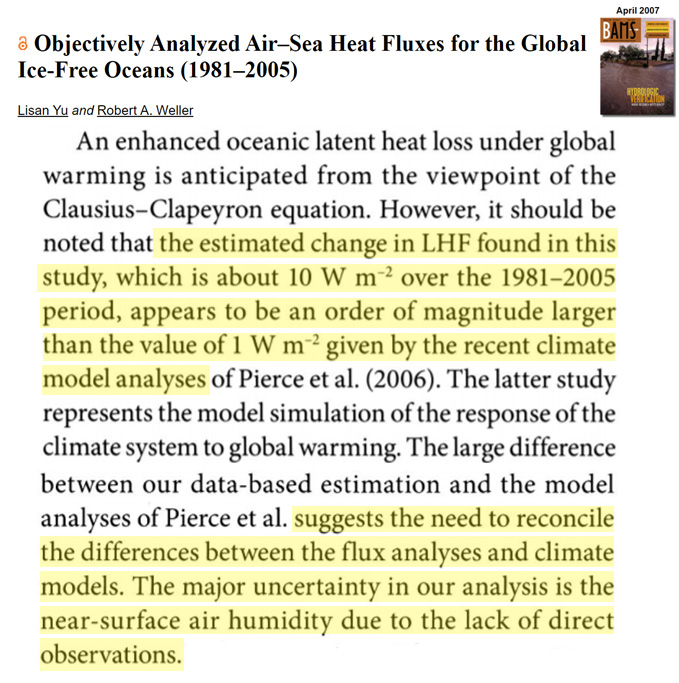 McKinley et al. (2017) analyzed ocean carbon sink estimates and was willing to admit that due to a lack of observation, we lack a “detailed, quantitative, and mechanistic understanding of how the ocean carbon sink works…”

In addition, because internal variability in oceanic carbon uptake is so massive and largely unobserved, we cannot yet detect an anthropogenic influence.

McKinley and co-authors go so far as to acknowledge the “change in CO2 flux over 10 years (1995-2005)…is due almost entirely to the internal variability” because in most ocean regions “the forced [human-induced] trends in CO2 flux are too small to be statistically significant” and the “variability in CO2 flux is large and sufficient to prevent detection of anthropogenic trends in ocean carbon uptake on decadal timescales.” 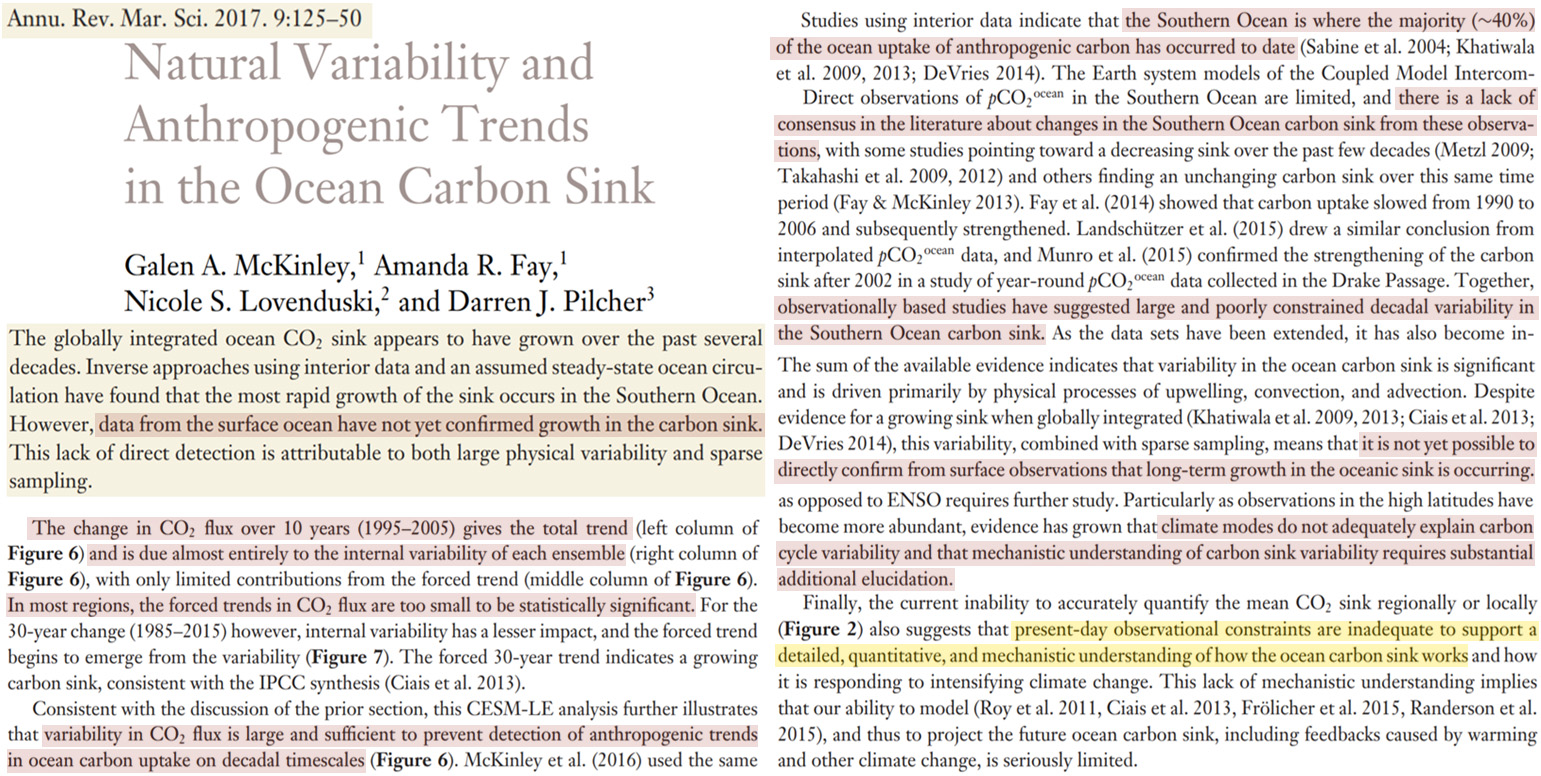 The Southern Ocean is where the largest portion of anthropogenic carbon (from our emissions) is said to be absorbed, or Earth’s largest oceanic CO2 sink.

Just 2 years ago, a carbon uptake analysis (Gray et al, 2018 with a Physics Today press release) that utilized estimates from biochemical floats instead of estimates from ships suggested the exact opposite of what had been previously thought. Instead of absorbing close to 1 petagram of carbon (PgC) per year, the Southern Ocean is barely even a carbon sink at all – just 0.08 PgC of yearly absorption. In fact, large regions of the Southern Ocean near Antarctica are a net source of CO2 to the atmosphere.

In other words, when estimates are float-based rather than ship-based, one estimate is more than 10 times different than the other. 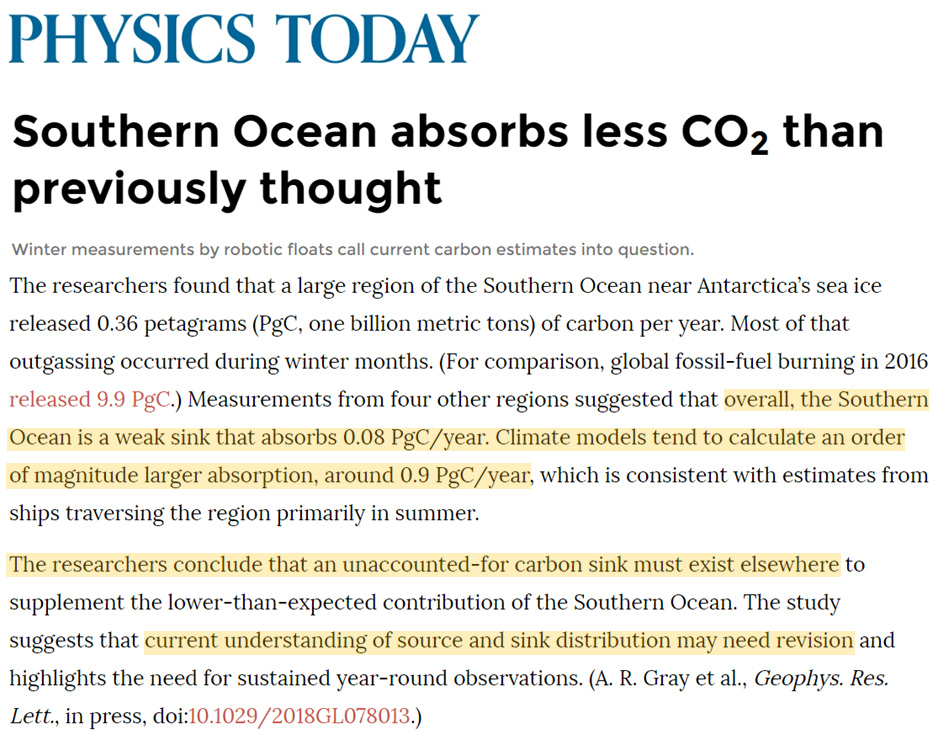 And now a new study (Buesseler et al., 2020) has scientists insisting that all of our previous estimates of global ocean carbon uptake are substantially wrong because we’ve been measuring from a fixed depth rather than varying depths.

Previously scientists had been using flux estimates from the “canonical fixed 150-m depth.” The new-and-improved way to assess carbon uptake is from varying but often much shallower depths: the euphotic zone (Ez). This is the section of the upper ocean layer that sunlight is able to penetrate, and it can “vary from less than 20 m to almost 200 m” in depth.

When we use the Ez to estimate carbon absorption versus export, the absorption changes from 2.8 petagrams of carbon (PgC) per year to 5.7. So the global ocean sink can be more than doubled just by varying the depth of measurement rather than using a fixed depth.

So, up to this point, scientists’ past guesses about ocean carbon uptake have been emphatically wrong. We can be assured, though, that our current guesses are anywhere from 2 to 10 times less wrong than the last ones. 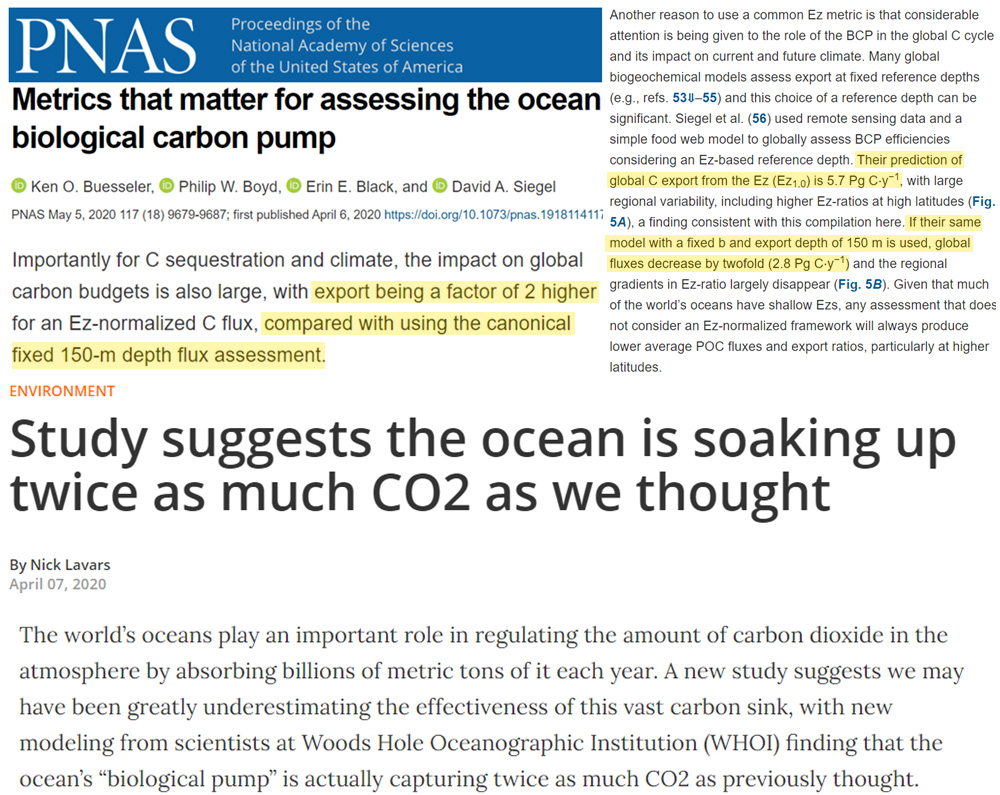