According to a new study, the expansion of offshore wind energy planned to date could lead to less electricity actually being produced at higher costs because, according to current planning, wind farms are taking the wind away from each other.

The researchers from the Technical University of Denmark in Roskilde and the Max Planck Institute for Biogeochemistry in Jena, Germany have investigated the topic. The study entitled “Making the Most of Offshore Wind” was commissioned by the Agora Energiewende and Agora Verkehrswende think tanks.

The report looks at that the question whether energy models used today by wind farm planners and investors can adequately capture the interaction effects between turbines stemming from very large areas covered with offshore wind farms at high installed capacity density.

Among the study’s key findings:

Offshore wind power needs sufficient space, as the full load operating time may otherwise shrink
from currently around 4,000 hours per year to between 3,000 and 3,300 hours. The more turbines
are installed in a region, the less efficient offshore wind production becomes due to a lack of wind
recovery. If Germany were to install 50 to 70 GW solely in the German Bight, the number of full-load
hours achieved by offshore wind farms would decrease considerably.”

Countries on the North and Baltic Seas should cooperate with a view to maximizing the wind yield
and full-load hours of their offshore wind farms. In order to maximize the efficiency and potential of
offshore wind, the planning and development of wind farms – as well as broader maritime spatial
planning – should be intelligently coordinated across national borders. This finding is relevant to
both the North and Baltic Seas. In addition, floating offshore wind farms could enable the creative
integration of deep waters into wind farm planning.” 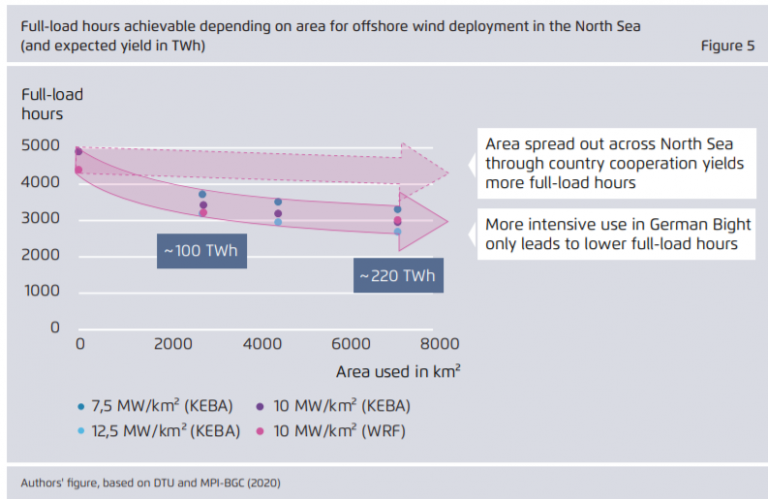 In a nutshell: a central pillar of the German and European transition to green energies threatens to become even more inefficient and more expensive than planned.