Today we present two papers on climate reconstruction using proxy data. One about East Antarctica and the other about belize. Hat-tip reader Mary Brown.

The team looked at 2000 years of proxy data from Belize and found interesting natural cycles at play. According to the authors, the Atlantic Multidecadal Oscillation (AMO) occurred 1885 years back in time and that it controls the SW Caribbean sea surface temperature patterns on multi-decadal time scales.

The authors note that the Holocene (<11.7 kyr BP) has been characterized by several periods of distinct climate changes and that the climate remains difficult to predict “due to the lack of comprehensive, annually-resolved and continuous sea-surface temperature (SST) data”.

So what about them models?

Examining an 8.55 m long sediment core from the bottom of the Great Blue Hole (Lighthouse Reef, Belize), the scientists were able to extract “an annually-resolved, continuous and unique south-western Caribbean climate record for the last 1885 years”.

The result? The data imply a general SST rise within the south-western Caribbean and that the modulation of SST within the time series likely operated on two different time levels: (1) Solar (e.g., “Gleissberg Cycles”) and volcanic activity triggered climate changes, which in turn induced responses of the Atlantic Multidecadal Oscillation (AMO), the North Atlantic Oscillation (NAO) and the El-Niño-Southern Oscillation (ENSO).

The authors conclude further in the abstract:

We suspect long-term positive AMO and NAO modes as the primary key control mechanisms of the Dark Ages Cold and Medieval Warm Period SST patterns. ENSO mode modulation likely exerted primary control on regional SST variability during the Little Ice Age and the Modern Global Warming. (2) Our δ18O data further indicate a striking secondary control on multi-decadal time scales: δ18O variations occur with 32–64 years periodicity. This signal is clearly evidence of SST modulation controlled by AMO phase changes (50–70 years) over almost the entire Common Era. Our carbon isotope record (δ13C) exhibits two remarkable negative anomalies and a long-term up-core decreasing trend. The first excursion (drop of 0.5‰) occurred with the onset of the Medieval Warm Period, which is reconstructed to be a peak time in south-western Caribbean tropical cyclone (TC) activity. This overlap is stressing a potential context between TC activity, enhanced coastal run-off and increased soil-erosion reflected by 13C-depleted carbon isotopes. A second anomaly (>1900 CE) is more likely the result of the “Suess Effect” (anthropogenic impact of the Industrial Revolution on carbon isotopes composition) than another reflection of a TC peak activity interval.”

But since 1900, man has taken over control of the earth’s climate, the authors seem to be suggesting. That was probably written in witha wink to the funders. 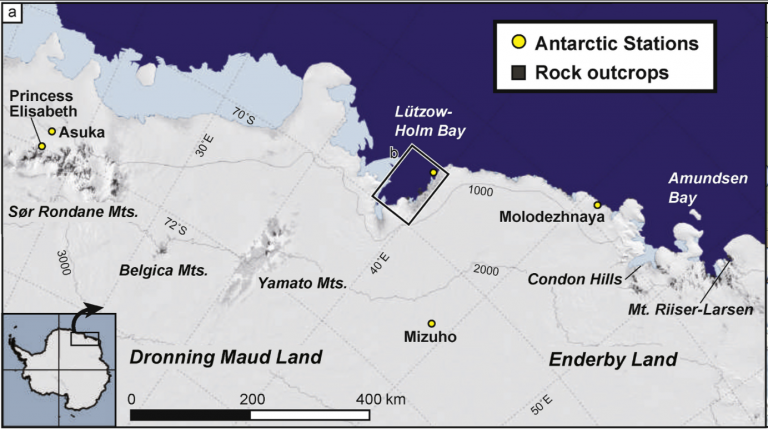 The authors found that it had thinned from at least 400 m a.s.l. during the Early to Mid-Holocene (9–5 ka) and say the abrupt thinning was likely caused by the natural inflow of modified Circumpolar Deep Water via submarine valleys in Lützow-Holm Bay.

Geological reconstruction of the retreat history of the East Antarctic Ice Sheet (EAIS) since the Last Glacial Maximum (LGM) is essential for understanding the response of the ice sheet to global climatic change and the mechanisms of retreat, including a possible abrupt melting event. Such information is key for constraining climatic and ice-sheet models that are used to predict future Antarctic Ice Sheet AIS melting. However, data required to make a detailed reconstruction of the history of the EAIS involving changes in its thickness and lateral extent since the LGM remain sparse. Here, we present a new detailed ice-sheet history for the southern Soya Coast, Lützow-Holm Bay, East Antarctica, based on geomorphological observations and surface exposure ages. Our results demonstrate that the ice sheet completely covered the highest peak of Skarvsnes (400 m a.s.l.) prior to ∼9 ka and retreated eastward by at least 10 km during the Early to Mid-Holocene (ca. 9 to 5 ka). The timing of the abrupt ice-sheet thinning and retreat is consistent with the intrusion of modified Circumpolar Deep Water (mCDW) into deep submarine valleys in Lützow-Holm Bay, as inferred from fossil foraminifera records of marine sediment cores. Thus, we propose that the mechanism of the abrupt thinning and retreat of the EAIS along the southern Soya Coast was marine ice-sheet instability caused by mCDW intrusion into deep submarine valleys. Such abrupt ice-sheet thinning and retreat with similar magnitude and timing have also been reported from Enderby Land, East Antarctica. Our findings suggest that abrupt thinning and retreat as a consequence of marine ice-sheet instability and intrusion of mCDW during the Early to Mid-Holocene may have led to rapid ice-surface lowering of hundreds of meters in East Antarctica.”