From environmental heroes – to national shame

The whole publicity stunt was probably supposed to go something like as follows: To protest against forest clearance to make way for a new stretch of autobahn, a group of 9 masked German tree-huggers would rappel from a speedway overpass and hang a banner demanding that the planned deforestation be stopped. And for their courageous activism, they’d surely make the regional news – maybe even the national news – and draw needed attention to man’s ruthless destruction of nature. Of course they’d be adored by the public as environmental heroes. They’d maybe even hold press conferences – and be surrounded by TV cameras and mikes.

Except for the national attention, things didn’t quite work out that way for the group of German radical environmentalist tree-huggers after tragedy struck.

According German daily Bild here, they ended up causing an 8-kilometer traffic jam and one “horror accident” as a 29-year old driver suffered serious injuries and had to be airlifted to a trauma center.

One German national daily labelled the activists as environmental idiots. 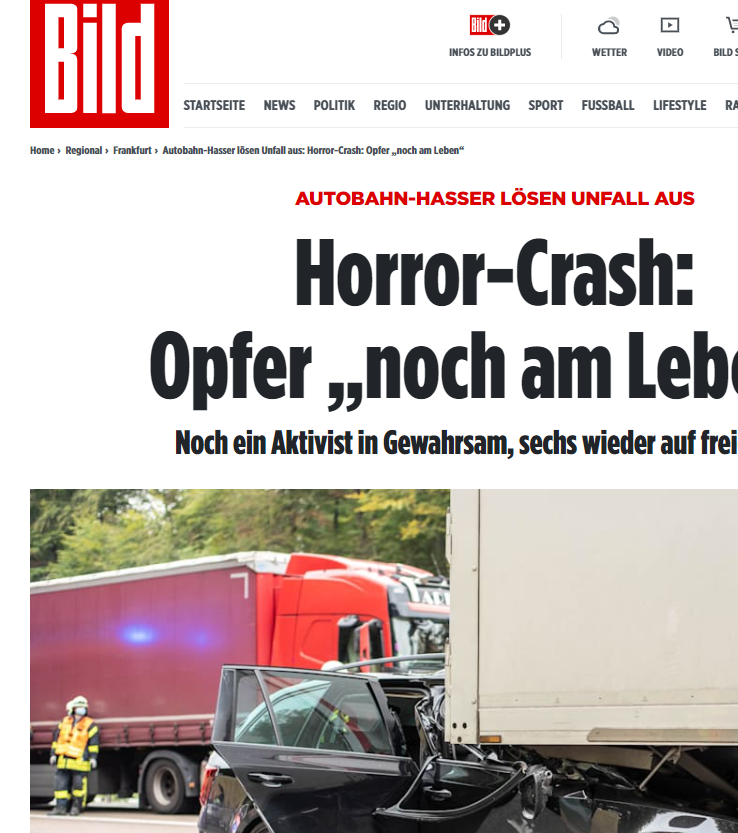 According to Bild, the “anti-autobahn activists” blocked the A3 autobahn near Idstein as two of them “rappelled off an overpass” and hung a banner across it. Their publicity stunt caused the fast moving traffic to jam to a sudden halt, causing an 8-kilomter traffic jam. The 29-year old driver mentioned above failed to noticed the end of the traffic jam in time and crashed into the rear of a truck.

“A 29-year-old drove into the end of the traffic jam and his Skoda crashed into the back of a truck – the man was seriously injured,” online Bild reports.

“Horror crash because of this idiot,” was the headline in Bild’s hard copy print edition this morning, with an arrow pointing at a young female activist hanging from the overpass. Another Bild photo showed authorities dragging off one of the protesters.

The online Bild here also reports that one protester is still being detained by the police. But: “Six have been released.”

“A protest that endangers human life has no legitimacy,” said Home Secretary of Hesse, Peter Beuth. “Anyone who endangers his fellow citizen has to be punished severely.”