Data recorded from the equatorial Pacific show a substantial La Nina in place, and falling temperatures with it.

The Australian Bureau of Meteorology (BOM) here reported on October 27: “All of the international climate models surveyed by the Bureau indicate the current La Niña will persist until at least January 2021. Most climate models reach their peak in December, before starting to weaken.” 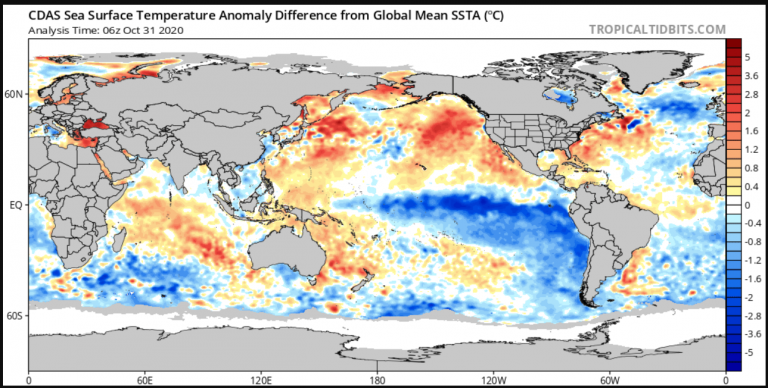 “Some models indicate that the current La Niña could possibly reach similar strength to the La Niña of 2010–12,” reports the BOM. “Sea surface temperatures in the central and eastern tropical Pacific are the coolest since the end of the La Niña event in 2012, but they are not as cool as during October 2010.”

The following chart shows the latest sea surface temperature anomaly for the Pacific El Niño equatorial regions of 3 and 4: 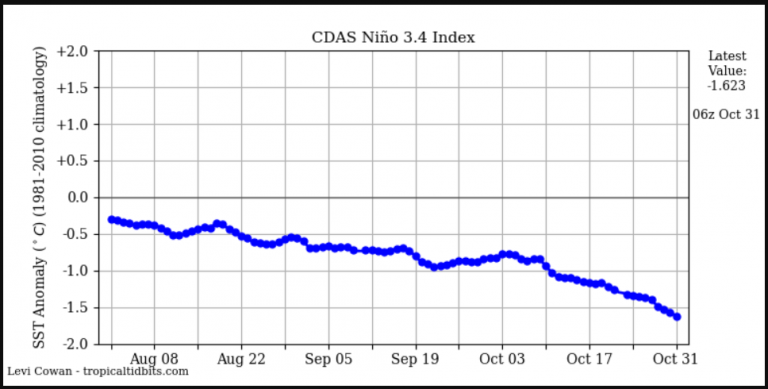 The substantial La Niña event will likely cause the global mean temperature to drop a few tenths of a degree Celsius.

Indeed, as in previous calculations, the experimental numerical NOAA model CFSv2 recently predicted a cold and long winter in large parts of Europe, especially from January 2021 until May 2021, see the following chart:

The more recent runs have backed off a bit on the intensity of the cold.

Of course these seasonal forecasts are fraught with uncertainty, but should these come true, it could be an especially long 2020/21 winter in Europe. This would only further exacerbate the COVID-19 epidemic.

The unusual record-setting winter cold blast just seen across North America may be a trailer of what’s in store for other parts of the northern hemisphere this winter.