Unusually harsh winter conditions have struck the northern hemisphere this October as record snow cover has been observed. More on this below.

But first looking at the untampered data from the Japan Meteorological Agency (JMA) for stations with complete data going back to 1998 for Canada and 2001 for France, we see there has not been any significant warming for the month of October.

First we examine 9 stations in Canada:

Some stations have warmed modestly, while the others have cooled. Overall, there hasn’t been much October warming at these stations over the past two decades.

In France, whose climate is heavily impacted by the Atlantic, we plot the JMA October data since 2001 for 14 stations across the country.

Nine of 14 stations have seen cooling or no warming for October since 2001. So here the data show that the opposite of what was projected is really happening, and that natural factors, likely Atlantic patterns, are at play.

Also Pakistan is getting pounded by heavy snows and the northern hemisphere currently has seen well above normal snow cover, reports Electroverse:

In fact, German Snowfan here reports how October has set a new record for northern hemisphere snow cover since data recording this magnitude began more than 50 years ago, according to the data from the University of Rutgers: 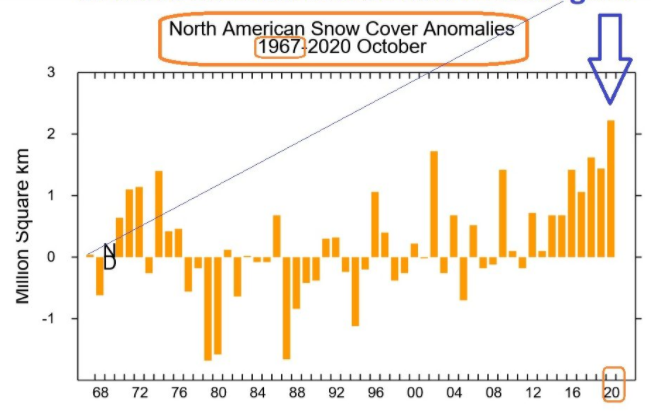 “The mercury held as much as 16°C below the season average in some parts, particularly in New York State, Vermont, Massachusetts, and Connecticut,” reported Electroverse. “Long Island, New York wound-up setting a new record low.”

“After a barrage of early-season storms, the snowpack across the Western United States is now well above average for mid-November, wrote Electroverse.

“In parts of Oregon, totals are hitting as much as 786% of normal. The story is similar across Washington State. While in Idaho and Montana, and elsewhere, the current Snow Water Equivalent (SWE) is comfortably above the 1981-2010 median. Finally, note the 1500% in Texas (the key only goes >= 150%!).”