Restraint Doesn’t Work, Only A 1000% Tax On Sugar Will Help Solve The Global Obesity Health Crisis

It’s Christmas season, and so it’s a good time to think twice about indulging in all the sweets out there. I wrote about sugar earlier, but a refresher doesn’t hurt.

10 reasons to drastically reduce sugar, and to TAX it

The latest research not only shows sugar is addictive, but how it is behind the global epidemic of diabetes and heart disease. It also causes cancer, obesity, violent behavior and hyperactivity in children.

Today tens of thousands of food products found in supermarkets and restaurants are spiked with sugar, lots of it. Depending on the data source, the average American now consumes some 50 kilograms of sugar in the form of sucrose and high fructose corn syrup annually.

That’s a kilogram of the poison every week.

A couple of centuries ago the average person consumed just a few kilograms per year. The human body was just never designed for today’s massive sugar intake.

Nowadays we are finding out that sucrose (table sugar) and like high fructose corn syrup are causing a public health disaster of monstrous proportions. According to Dr. Robert Lustig, Endocrinology Division, University Of California San Francisco, there will be up to 165 million obese people in USA by 203o — 130 million of whom will be diabetic. A national health crisis.

Funding healthcare systems to treat all this will not be possible. Lustig believes that the bottom will fall out of the healthcare system within 10 years. What follows are 10 reasons to avoid sugar and to tax it massively.

Table sugar, sucrose, which is 50% glucose and 50% fructose, causes blood sugar (glucose) levels to spike. High blood sugar is detrimental to the organs and blood vessels, and causes severe damage over time. 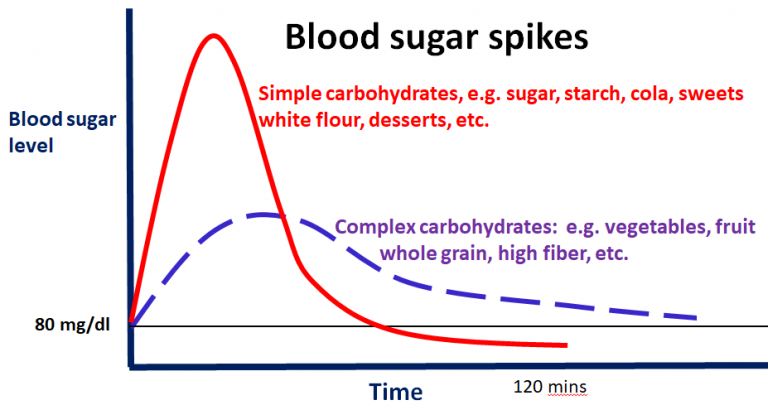 The sugar you ingest is quickly broken down into simple glucose and fructose molecules, which rapidly get absorbed into the bloodstream. The result: your blood sugar (glucose) spikes to dangerously high levels and this triggers the secretion of insulin by the pancreas. The insulin acts to remove the excessive levels of glucose from the blood and store the excess as fat in your cells.

Blood sugar spikes lead to the creation of fat.

On the other hand, complex carbohydrates, which are chains of sugar molecules that need time to be broken down by your digestive system, lead to only moderate blood sugar rises and are thus far better. Complex carbs have great amounts of fiber and often fraught with important nutrients like minerals.

Over time, after years of being on the blood sugar roller coaster, there’s a high risk of cells becoming insulin resistant, meaning they will no longer stop taking in glucose from the blood to convert it into fat. Blood sugar thus remains high (hyperglycemia) and is very harmful.

There’s a high chance that the pancreas will give up producing insulin. The result: diabetes mellitus 2.

Calories are not equal. Some calories fuel the cells of our bodies, which is good, while others cannot be used and end up going straight to the gut and clogging your organs. The two most notorious here are calories from alcohol and fructose.

Table sugar is 50% fructose which cannot be used by the body, and so it gets converted into visceral fat by the liver. This fat gets stored inside everywhere between the organs. It’s natural to have some  visceral fat, but not great amounts.

The following image shows a comparison of a healthy set of organs to a diseased one fully clogged with visceral fat: 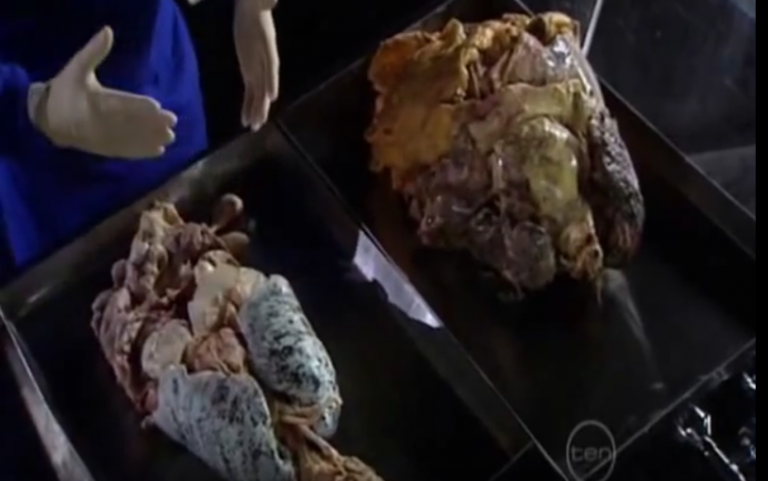 Just how bad visceral fat can get is poignantly illustrated by this short video here (Warning: not for sensitive stomachs).

Recall how the average American eats close to 50,000 grams of sugar annually. That converts to over 200,000 calories. It’s easy to calculate the potential fructose-induced visceral fat production from this.

When your body goes on a sweets consumption-induced blood-sugar roller-coaster, the insulin overshoots and ends up removing too much glucose from the blood. The result: low blood sugar, known as hypoglycemia (3). The brain sets off the alarms and tells you to get the sugar level back up. The body cannot live without the blood sugar needed to keep the cells going: 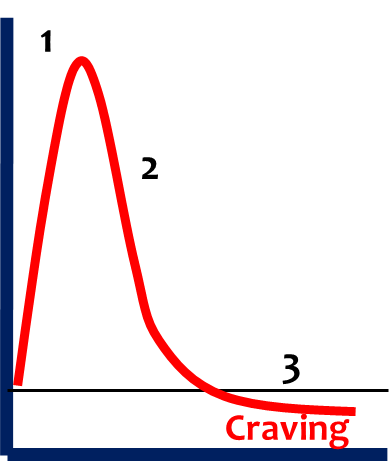 Figure 3: After eating very sugary food, blood sugar skyrockets (1), insulin is secreted by the pancreas to bring blood sugar back down (2), but overshoots and can result in blood sugar that is too low (3), and lead to powerful cravings and unruly behavior.

Eating more sweets to satiate your craving will only lead to the next high blood sugar roller-coaster cycle. Compounding the problems, obesity itself wreaks havoc with hormones and adds an impetus to the development of metabolic syndrome.

If table sugar in itself wasn’t bad enough already, it’s also addictive. Over the recent years, researches have found that sugar has an addictive effect on the body much in the same way as alcohol or nicotine. It does this in two ways.

Firstly, fat cells produce leptin, the appetite modulator, which signals the brain you have had enough to eat. But over time with too much exposure to sugar, leptin gets disrupted and the person no longer feels satiated.

Secondly: when one eats sugar, neuro-transmitter dopamine gives you a feeling of pleasure. According to Dr. Robert Lustig, over time dopamine-tolerance develops within the pleasure zone of the brain and so greater quantities are needed to produce the same pleasure effect – very much in the same manner as alcohol or nicotine. Result: Tolerance + withdrawal = addiction.

Blood sugar leads to the natural process known as glycation. Sugar in your bloodstream attaches to proteins and fat to form harmful new molecules called advanced glycation end products (AGEs). When there are too many, as is the case with high sugar consumption, your body cannot get rid of them and thus lead to oxidative stress and inflammation in the body.

According to Doris J. Day, M.D., clinical associate professor of dermatology at New York University Langone Medical Center, glycation attacks the skin protein’s collagen and elastin (the ones that make you look young). When bonded with glucose, the skin becomes stiff and inflexible, more lines and wrinkles form. Moreover, AGEs hinder production of new collagen and elastin and so skin repair is difficult.

Free radicals in your brain stemming from the consumption of sugar have been found to be linked to dementia and Alzheimers. Free radicals cause damage to cells and make them age faster, especially brain cells. According Dr. Russell Blaylock, a former clinical assistant professor of neurosurgery at the University of Mississippi Medical Center:

Big consumers of sugar have 6 times higher incidence of Alzheimers.”

If accelerated aging wasn’t bad enough, sugar consumption is also strongly linked to cancer. It turns out that cancer cells thrive on glucose. But this is not something recently discovered. It was known already in the 1930s by Otto Warburg, who won the Nobel Prize.

New research shows that sugar may even create cancer cells. According to a 2013 study published in the Journal of Clinical Investigation (JCI): “Increased sugar uptake promotes oncogenesis via EPAC/RAP1 and O-GlcNAc pathways”. The study summarizes: “These results may provide additional evidence for how hyperglycemia in diseases such as obesity and diabetes could provide a microenvironment that results in higher risk of some cancers (69, 70).”

There are numerous studies showing how violent behavior is linked to hypoglycemia (low blood sugar), according to Dr. Russel Blaylock. Hypoglycemia significantly increases “excitability”. When the brain is in a state of hypoglycemia, neurotransmitter glutamate is released. It is the “primary thing that turns the brain into high gear“.

According to Blaylock (7:30), convicted criminals become far less violent when they are put on a healthy, low blood sugar inducing diet. But as soon as they return to sugary diets, violent behavior increases. There’s a clear link between crime and nutrition, says Blaylock.

A group of researchers led by psychologist Simon Moore from Cardiff University in the United Kingdom have also shown in a study that boys who ate sweets daily at age 10 are far more likely to commit violent crimes in adulthood.

The human body needs a steady supply of some 90 essential vitamins, minerals, trace elements, amino acids and fatty acids to stay in good health. Everyone knows that a deficiency in just a single nutrient can wreak havoc on the body’s health and lead to chronic disease.

Unfortunately sugar, high fructose corn syrup, highly refined flours and starches provide only so-called empty calories, i.e. they deliver near zero essential nutrients. Should the calorie intake by children or adults come in large part from nutrient-void source like sugar, white flour, processed starches, meaning nutrient-rich foods get booted off the table, then over the years nutrient deficiencies invariably result and lead to a host of chronic diseases over the long run.

Nowadays it’s not uncommon to see some children get 30 – 40% of their calories from near-zero nutrient junk food. This is really sad.

Of course no one is calling for a sugar ban. However it is imperative that action be taken QUICKLY to get sugar and junk food consumption down drastically to the much lower levels that nature intended for our bodies.

Junk and sugary foods need to be seen as treats given out from time to time, and not something that is to be served daily at the table as part of the normal diet.

Today, a hefty sugar tax (1000%, yes 1000%) would make great sense and is probably the only way to partially avert the coming human health collapse.

14 responses to “Restraint Doesn’t Work, Only A 100014 Tax On Sugar Will Help Solve The Global Obesity Health Crisis”