Back in July 2019, the German media and the German DWD national weather service went into overdrive when the Lingen-Germany  station, located in northwest Germany near the Dutch border, smashed the country’s all-time record high as the ‘mercury’ rose to a scorching 42.6°C. Another sign of global warming.

The previous all-time had been a comparatively cool 40.3°C, so the margin was impressive – too impressive!

Within days, independent meteorologists cast doubt over the heat record, pointing to serious station siting issues. The record-setting station station was located right near a DWD office building, shielded from the wind by grown trees and situated in a depression in the ground that trapped air and prevented it from mixing: 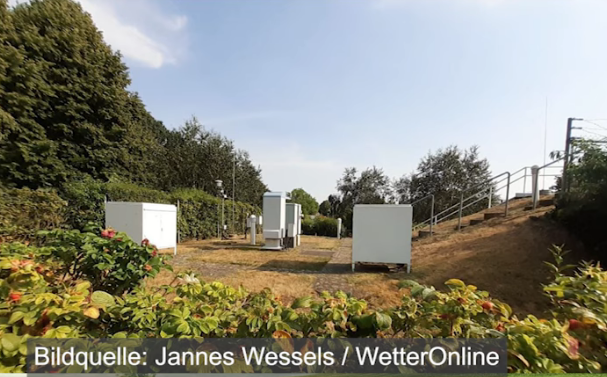 At first DWD officials dismissed the criticism, telling Bild daily it planned to stick to the record Lingen readings, deeming them to be of good scientific quality. The DWD insisted the siting had been found to have “no serious influence on the temperature measurements” and therefore “did not contradict the WMO standards.”

DWD then admits record high needed to be rechecked

But the criticism of the station’s integrity did not stop. For example, an NTZ summary of all the temperature readings recorded at the time at Lingen compared to those of 6 nearby stations showed how the Lingen readings stood out like a sore thumb:

On every single day, Lingen handily beat its neighbors, at times by large margins. Clearly something was amiss.

Eventually some 10 months later, in June 2020, the DWD was forced to concede the station was not optimally sited after all, and thus needed to be rechecked, read here. The DWD also noted the station would be moved as well.

Finally, just before Christmas, 2020, the DWD announced that the all-time record high temperature for Germany indeed had been scrapped, according to a recent Klimaschau report.

According to Uwe Kirsche, DWD spokesman and public relations head:

“We have re-examined the temperature data from Lingen for half a year – also using parallel measurements – and other older readings in this regard. The results are clear: Since 2017 temperatures in the surrounding area occurred again and again that were not representative of the region. That was the case on July 25, 2019. For this reason the German record value of 42.6°C measured in Lingen has been removed from the climate archives.”

Though the record stands, all the blaring media headlines remain. In today’s Internet world, falsehoods make their way 100 times around the world before the truth catches up.

Needless to say, there are no blaring headlines about the correction. The public information damage is irreversible.