Another paleo-climatological study reveals that the Mississippi river basin was 2°C warmer than today 700 years ago, another indication that the Medieval Warm Period (MWP) was warmer globally than today.

This is bad news for the zealot backers of the man-made global warming hypothesis.

Today as atmospheric CO2 concentrations climb beyond 400 ppm, climate alarmists insist that the globe is hotter today than at any time in the past 1000 years, possibly even since civilization started 8000 years ago.

Yet, new studies increasingly show the claim to be false, and thus CO2’s impact on global warming has been hugely overstated. 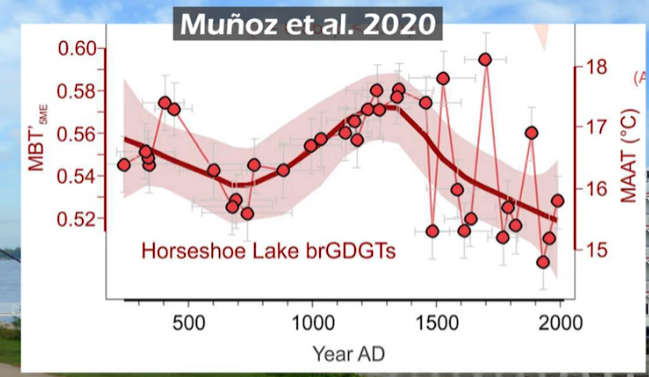 As the above charted results show, the region was some 2°C warmer than it is today, even though CO2 was more than 100 ppm below today’s level.

Also astonishing: the sediment-based reconstruction shows that today is the coldest it’s been in 1600 years!

The study found that the Mississippi saw more flooding during warmer periods, and less during cooler times.

The German Die kalte Sonne says the study’s results “remind us of the importance of natural climate variability” and that it essential to take it into account over 1000 years or more when modeling climate.

“It’s still a mystery as to why it was warmer in the Medieval Warm Period than it is today in the Mississippi area.”

The study’s authors write in the abstract:

Our data show pronounced warming during the Medieval era (CE 1000–1,600) that corresponds to midcontinental megadroughts. Severe floods on the upper Mississippi River basin also occurred during the Medieval era and correspond to periods of enhanced warm‐season moisture. Our findings imply that projected increases in temperature and warm‐season precipitation could enhance both drought and flood hazards in this economically vital region.”