The IPCC-endorsed anthropogenic global warming (AGW) paradigm finds a warming Antarctica results in more precipitation locked up as ice on the continent. This contributes to reducing sea levels: a -1.2 mm/year−1 mitigation of sea level rise over the next 80 years.

In the 4th IPCC report, Working Group 1 (the physical science) reported that as global temperatures rise, “GCMs [models] indicate increasingly positive SMB for the Antarctic Ice Sheet as a whole because of greater accumulation.” This means that by 2100 Antarctica “would contribute 0.4 to 2.0 mm yr−1 of sea level fall.” Over the next 980 years, Antarctica’s ice accumulation will reduce sea levels by nearly a full meter (-0.8 m by 3000). 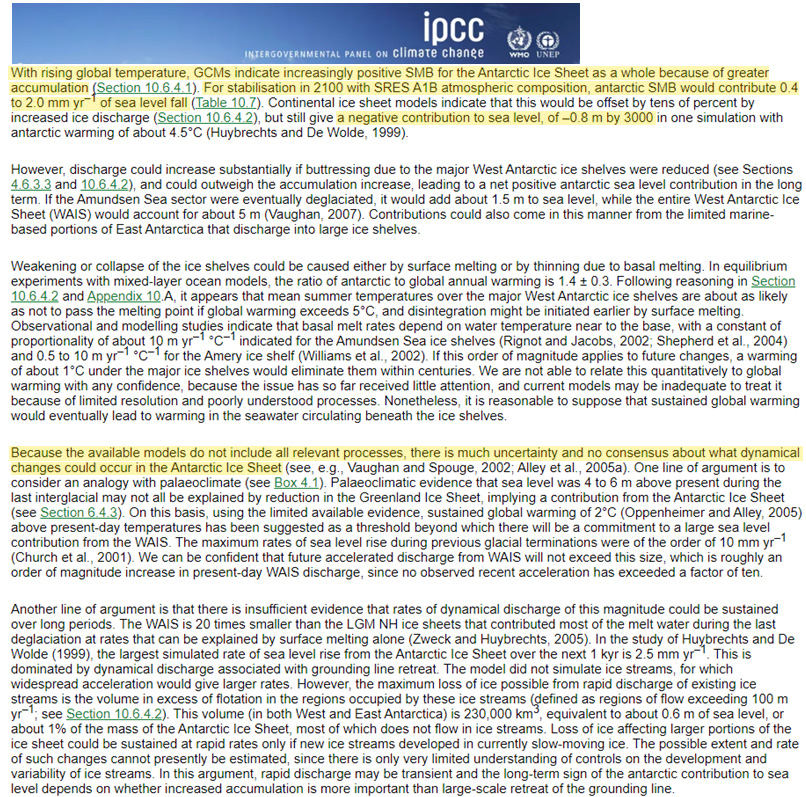 The position that Antarctica will significantly reduce sea levels over the next century due to rising anthropogenic greenhouse gas emissions has been endorsed elsewhere in the scientific literature (Krinner et al., 2007, Palerme et al., 2017). 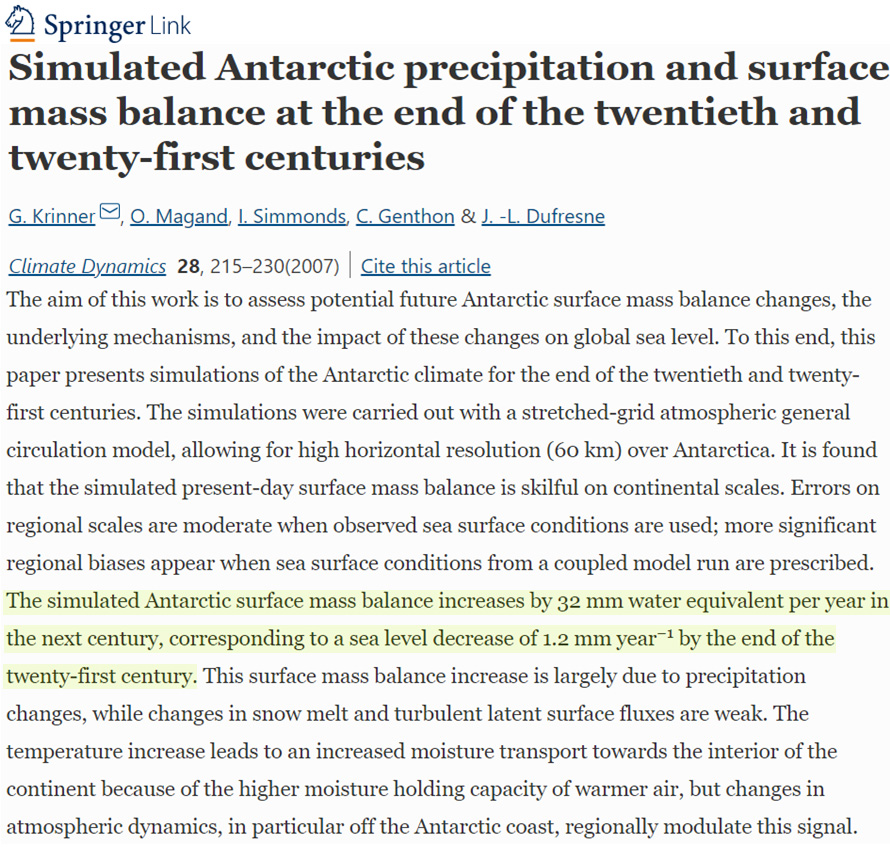 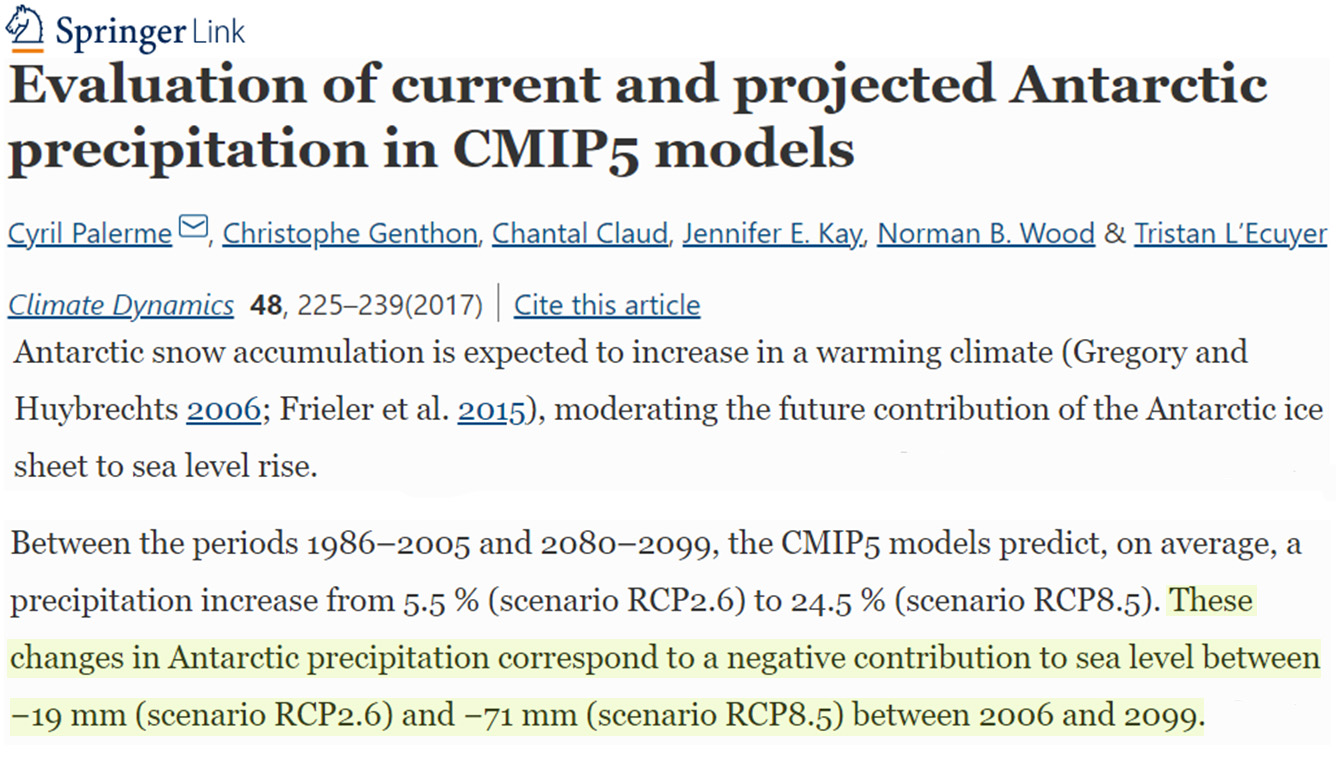 Scientists even conclude that the Antarctic reduction in sea levels from net ice accumulation supersedes the ice water melt contribution to sea level rise for the Greenland ice sheet over the next 80 years. This means a warming climate actually results in “not significantly different from zero” net sea level rise contribution for Greenland and Antarctica combined (Huybrechts et al., 2004). 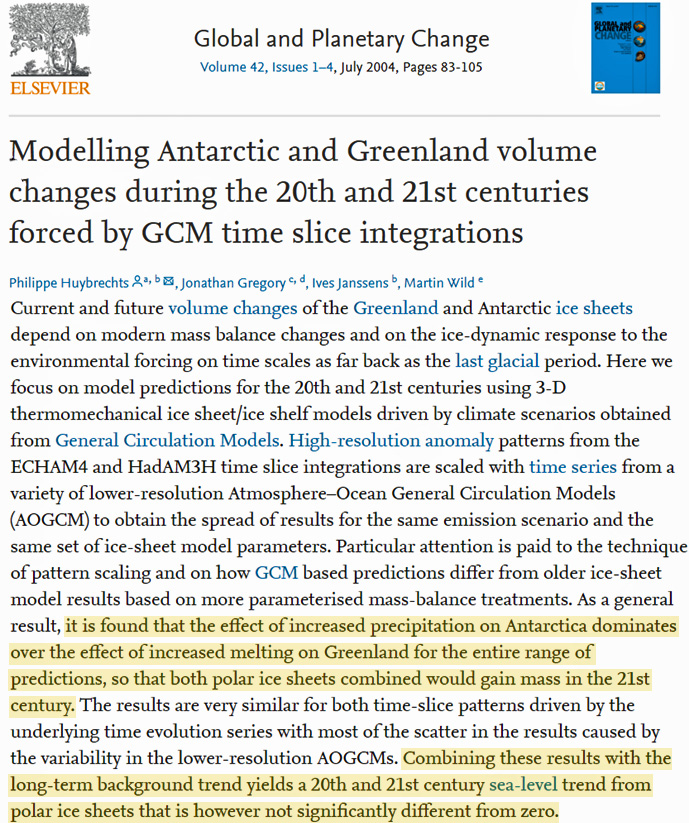 Indeed, the East Antarctica surface has been gaining mass in recent decades (Nature Geoscience, 2018) to the point that the mass gains in East Antarctica exceed melting (from beneath ice shelves) losses for the rest of the continent. This means that Antarctica as a whole is currently “taking 0.23 millimeters per year away” from sea level rise (NASA, 2015). Reassuringly, it would require “prolonged periods of lasting hundreds of thousands to millions of years to induce even partial retreat” according to a Nature Geoscience consensus statement (2018). 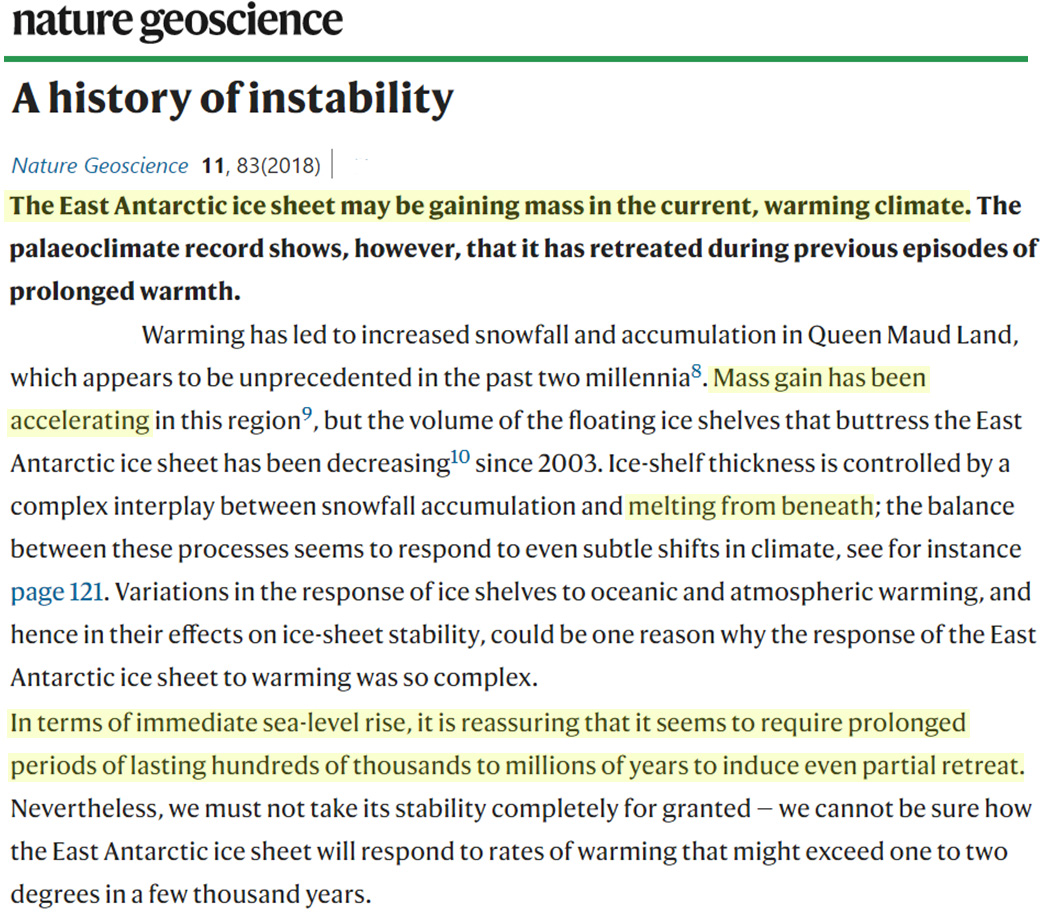 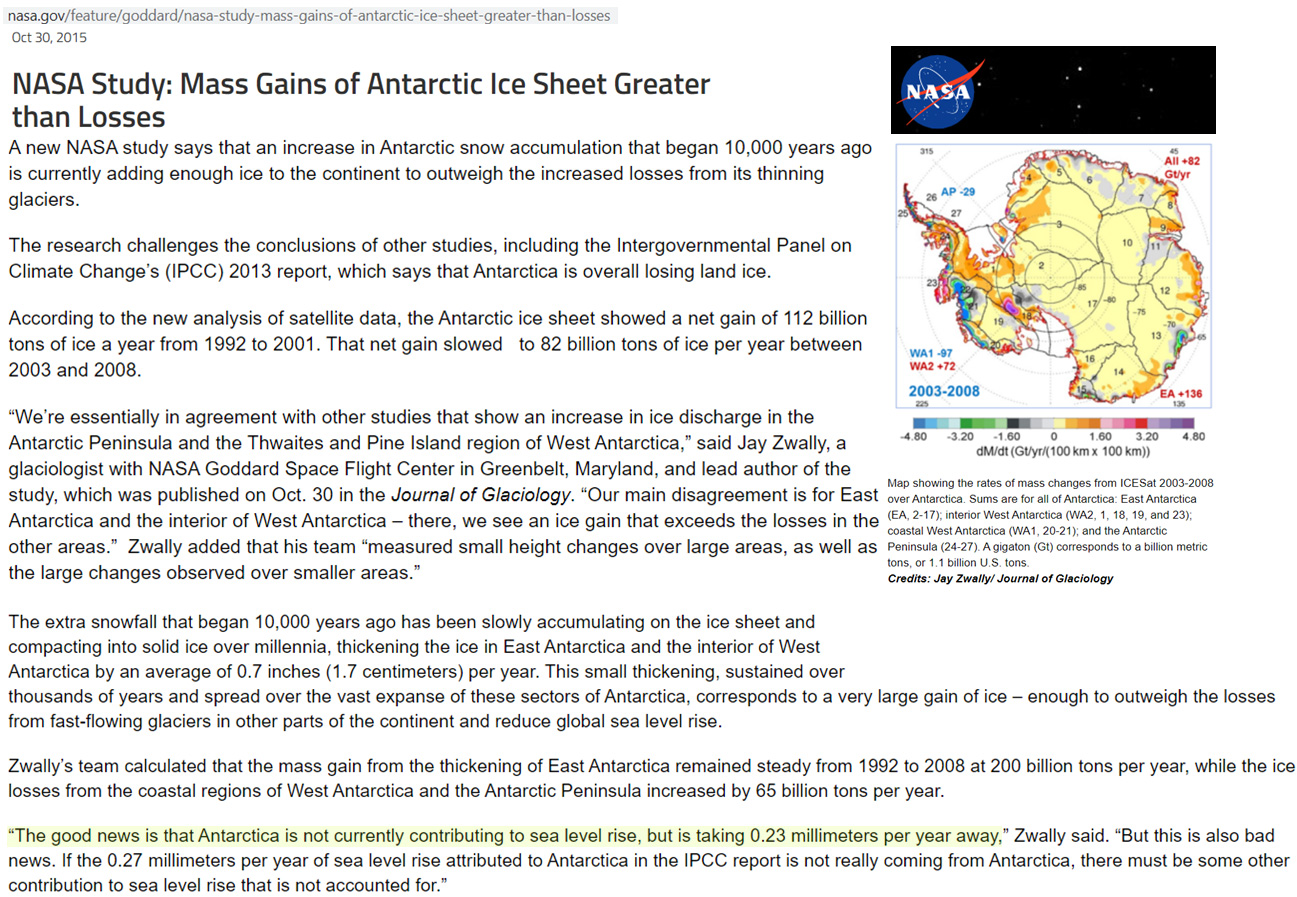 Antarctica has actually been reducing sea levels for longer than just the last several decades. The long-term trend in mass gains exceeding losses and contributing to sea level fall has actually accelerated slightly since 1900. Thomas et al. (2017) report “a net reduction in sea level of ∼ 0.02 mm decade−1 since 1800 and ∼ 0.04 mm decade−1 since 1900 AD” due to climate warming. 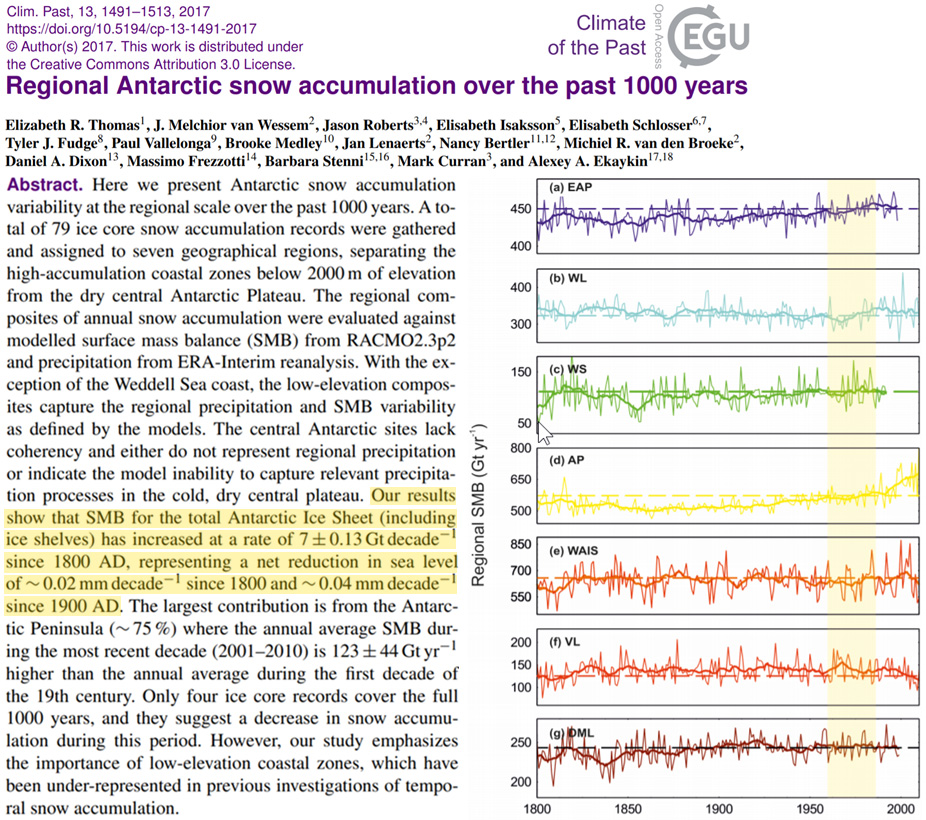 One of the most fundamental warnings by climate change activists is that global warming leads to catastrophic sea level rise. The physical science, however, fails to lend support for this claim.