Global cool-down. 2m-temperature-deviation in March 2021 cut in half compared to a year earlier.

Especially on the still wintry NH there has been a real crash, for example over the land masses in Eurasia, while on the still summery SH the oceans are significantly cooler than in the same month last year. So far, 2021 is 0.38°C colder than the previous year.

The data were also “adjusted” (falsified) with the warming NASA/GISS factor and are significantly lower in unadulterated reality. La Niña continues to greet us.

On another note, as of March 15, 2021, the global sea ice area remains in the middle of the 30-year mean area – thus there’s no hint of continued global warming. 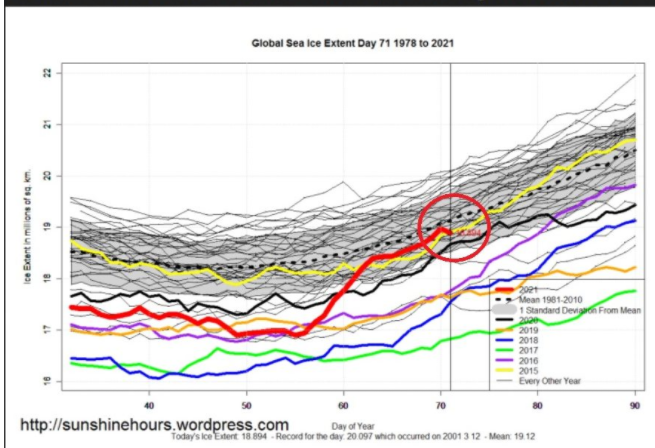 Standard deviation (grey area) from the 30-year average 1981-2010. There is no sign of “global warming”, which has been called “climate change” since its disappearance.