Marc Morano, the publisher of Climate Depot, has come out with his latest book: “Green Fraud: Why the Green New Deal Is Even Worse Than You Think. It explains why the “Green New Deal” is just the Red (Communist) Old Deal, but with a new, glossy packaging.

The book has surged to no. 2 on Amazon’s list of books under Environment since its release on March 23. 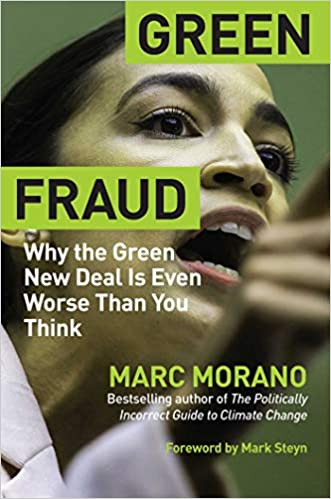 While the Green New Deal is being pitched by the media and leftists as the last hope for the environment, the guarantor of nice weather, modern jobs and the provider of utopia, it would in fact lead to the exact opposite: a Varian-like socio-political disaster.

In Green Fraud Marc Morano, author of the the best selling The Politically Incorrect Guide to Climate Change, shows how the movement  isn’t about the climate at all but rather about permanently locking down the free Western Hemisphere and dictating every aspect of our lives – especially how we are to think. The Green New Deal aims to be The Mother of all Lockdowns.

Morano rightfully portrays The Green New Deal as the greatest threat to liberty since Soviet-style communism, and he does so not based on opinions and anecdotes, but on history, facts and science. The book cites hundreds of scientific and journalistic sources.

“Even worse than you think”

Morano’s in-depth book shows how man-made climate change is not a threat, and that it is a made up problem whose pseudo-solution is a large-scale expansion of government power. And Green New Deal proponents openly say so. For example, Morano describes how Democrat congresswoman Alexandria Ocasio-Cortez (AOC) acknowledged her “deal” will require “massive government intervention.”

“It does, it does, yeah, I have no problem saying that,” Ocasio-Cortez told NPR’s Steve Inskeep in February 2019.

In Chapter 5, Morano exposes how the Green New Deal is floundering in Europe, which now suffers from astronomically high energy prices and grid instability. Despite all the hardship, Europe has in fact made very little progress on reducing emissions.

The failures of green energies in Europe are so glaring that it’s become an embarrassment that the activists across the Atlantic in the USA are scrambling to keep swept under the carpet.

Leftist pressure on Amazon to drop sale of book

So it’s no wonder the Left are now mobilizing to pressure Amazon to drop “Green Fraud”. Every book that the leftists can keep from being sold is probably one they won’t have to burn later.

Must read for policymakers

At 256 pages, it’s ideal for a weekend, and it is one you can send to your political representatives nationally, at the state-level and locally.

Western society is now at a crossroads. Complacency is not longer an option. If we are to save the liberty and democracy that have blessed us so well over the past generations, the only option left is action. Morano’s book makes that vividly clear.

Marc Morano is a former senior staff member of the Senate Environment and Public Works Committee, publisher of ClimateDepot.com, author of The Politically Incorrect Guide to Climate Change (2018), and producer of Climate Hustle (2016) and Climate Hustle 2: Rise of the Climate Monarchy (2020).