Now we know why prominent activists, like Barack Obama, purchased expensive seaside homes even after warning the seas are “rising rapidly”. It turns out they really aren’t, a new University of Utrecht study shows.

And like many climate alarmists, Potsdam Institute climate researcher Stefan Rahmstorf predicted the oceans could very well rise by an alarming 1.9 meters by the year 2100 because of manmade global warming.

Many IPCC authors predict sea level rise will accelerate and that 80 cm is possible this century – compared to about 18 cm during the 20th century. One thing is sure: There’s plenty of alarmism out there, and though many will not admit it, there’s also lots of uncertainty.

On April 25, Die kalte Sonne presented the latest on sea level rise news and the possible contribution by Antarctica, where 90% of the world’s freshwater ice is located.

“How can the projections on sea level rise deviate so much from each other, Die kalte Sonne asks? It gets down to the assumptions made by climate models.

A new Dutch paper by Westen and Dijkstra of the University of Utrecht released this month in the journal Science Advances published the results of high resolution model simulations that accounted for oceanic eddies in far greater detail than previously. 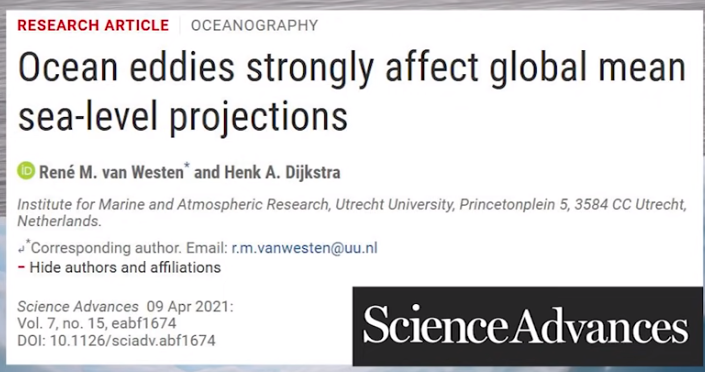 Models have made inaccurate assumptions

The researchers discovered that the oceanic eddies around Antarctica and Greenland have global impacts and play a significant role on ice melt, and thus sea level rise. The earlier assumptions that warming water would accelerate melting appear to have been overly simplistic and do not accurately reflect what is really going on.

Some regions going to get cooler

“The new high resolution simulations now show something entirely different,” Die kalte Sonne reports in their video. “The ocean around Antarctica are going to hardly warm up. Some regions are in fact going to get colder by the end of the century. ”

The implications? Ice melt is going to be only a third of what previous, lower resolution simulations had projected.

Also the new higher resolution simulations also show increased snowfall, which will mean that the Antarctic ice sheet as a whole will remain stable. This means that Antarctica is going to contribute ZERO to sea level rise this century – not what alarmist scientists foresaw.

It also means that sea level rise projections by the year 2100 (again) have to be reduced – by 25%. With all things considered, a sea level rise of only 33 cm is now expected, Die kalte Sonne reports.

Here’s the press release by the University of Utrecht on the recent findings: 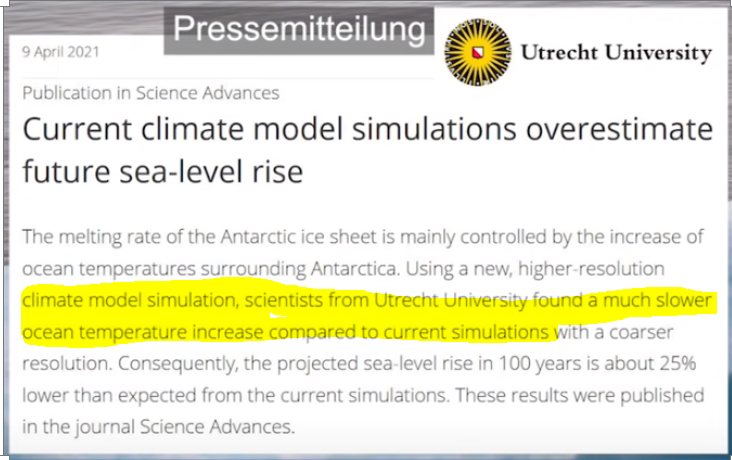 How much attention did this good news get in the media?

Readers will want to pepper the sea level alarmists with links to this paper.