Almost everyone with even just a fraction of a science education knows Co2 is fertilizer to vegetation and that the added 100 or so ppm in our atmosphere over the past decades have been beneficial to plant growth and thus led to more greening of the continents.

Yet, some alarmists still sniff at this fact, or deny it.

In the 34th climate video, Die kalte Sonne here reports on a recent German study by Merbach et al that looks at the question of just how beneficial the added CO2 has been to plant growth globally.

The authors’ findings: Over the past 100 years, there has been increased global vegetation growth.

“The global vegetation cover increased approximately 11- 14%, of which 70% can be attributed to the increased CO2 in the atmosphere,” reports Die kalte Sonne on the findings.

Another result: “Since 1982, the inventory of trees has increased more than 7%”.

The news gets even better, the scientists show. Food production is expected to surge due to the increased amounts of CO2: 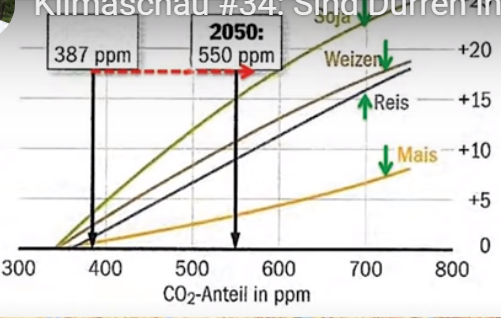 As the diagram above shows, crops such as soy bean (Soja), wheat (Weizen), rice (Reis) and corn (Mais) will surge as CO2 concentration rises to 550 ppm by 2050, thus lending a huge hand in feeding the planet’s growing population, which could reach 10 billion by mid century.

Another example cited is Germany: “From 1990 to 2015 in Germany, crop yields for wheat, barley, corn and potatoes rose more than 30%, which the researchers attribute in part to the higher CO2 concentrations,” Die kalte Sonne reports.

“The authors hope that the CO2-related crop yield increase will secure the food and feedstuffs production and contribute to feeding the world’s growing population.”

The study appeared in the Journal of Land Management, Food and Environment at the end of 2020.