Regular NoTricksZone contributor Kenneth Richard tweeted about an inconvenient 2013 Live Science showing that the Medieval Warm Period was as warm or even warmer than today in the area of Juneau, Alaska.

Recall how in 1990 the first IPCC report featured a temperature chart (right) of the last 1000 years, which inconveniently showed the Medieval Warm Period was warmer than today.

Activist scientists than declared they had to get rid of the embarrassing Medieval Warm Period and so had it replaced by Michael Mann’s notoriously flawed “hockey stick chart” in the 2001 third assessment report. They claimed the 1990 chart was indicative of only the North Atlantic region, and not the globe.

Today, though, we know that there are hundreds of papers out there confirming Medieval Warm Period was indeed global, and not just a local phenomenon.

Kenneth’s tweet features a 2013 Live Science article on how an ancient forest had been exposed “for the first time in more than 1,000 years.”  by the thawing of Alaska’s Mendenhall Glacier near Juneau. 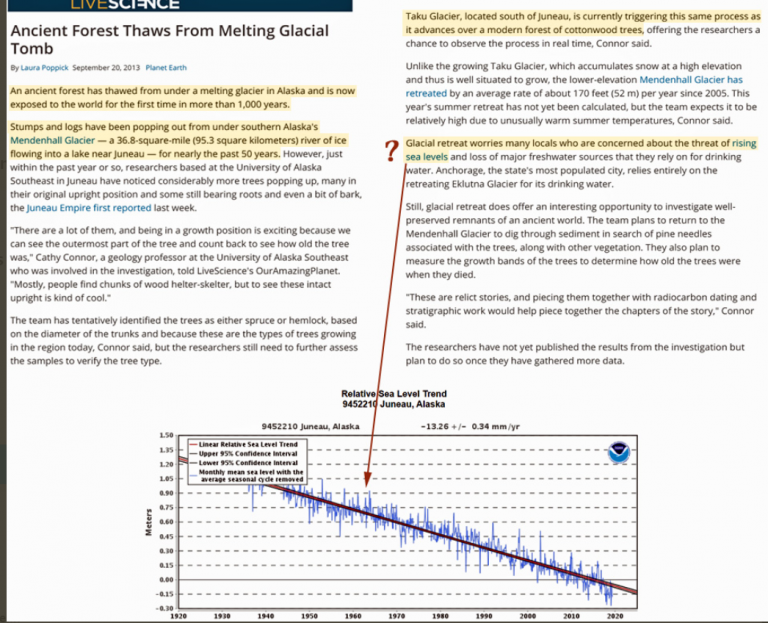 If that weren’t embarrassing enough, Live Science also claimed that the locals near Juneau were worrying about rising sea levels because the glaciers have been melting. Yet, as Kenneth demonstrates, “sea level rise” is the last thing that the folks near Juneau need to be concerned about. As the chart shows, relative sea level near Juneau has been dropping rapidly. Crazy what some media report.

Globally, coastal sea level rise as measured by tide gauges is coming in only at 1.7 mm/ year – only about half the the rate of that measured by satellite altimetry and equal to that of the 20th century.