CO2 scaremongering and the truth about German floods

Last week we saw flood disasters in various areas of Germany and other European countries, especially in the area of the Ahr River, which have not only caused billions in damage, but tragically also claimed up to more than 200 lives. Considering that there had been precise warnings days before, it is hard to understand why the warnings issued by scientists at the European Flood Awareness System (EFAS) were hardly listened to.

Initially, the German DWD weather services  also the public media warned of “heavy rain” and were late in issuing (if at all) warnings of rapidly rising floods. As a result, people were caught unprepared in many cases and couldn’t save even the most basic necessities. In addition to the numerous fatalities, thousands of residents have seen their livelihoods destroyed. 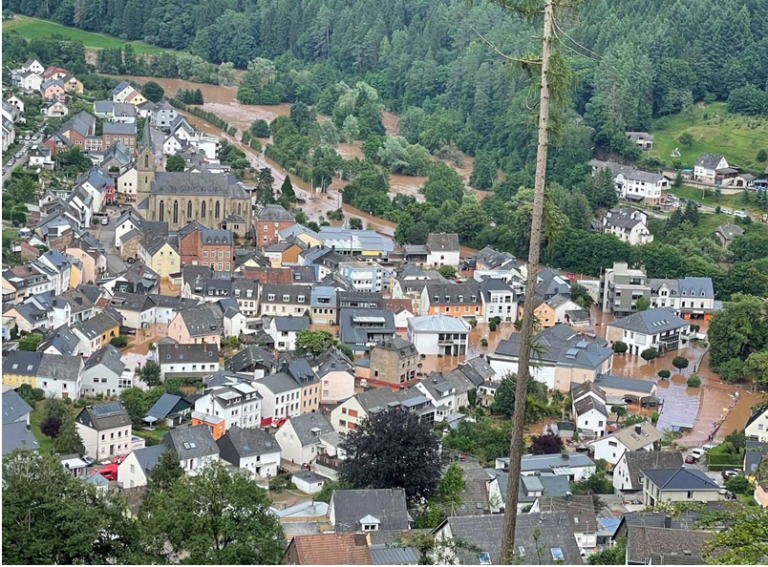 It is all the more pathetic that now, in the days following the catastrophe, precisely the same “weather and climate prophets” and their mainstream media affiliates now speak of an “unprecedented” catastrophe and blame it on climate change caused by CO2 emissions. These eternal doomsday warners claim they can see 50 or more years into the future, but did not warn of the floods until they were almost here.

Now they are trying to explain away this glitch. A prime example of this was recently provided by German professor Mojib Latif, the chairman of the German Climate Consortium, who has been a media darling for many years. In an interview with the newspaper FAZ (unfortunately now behind a paywall), he was asked directly whether this event was clearly climate or weather related, and delivered a prime example of doublespeak.

A real work of art was his formulations on the new fashionable topic of the climate alarmists: the allegedly weakening jet stream. He described this point as “controversial, but scientifically quite plausible” and spoke in the subjunctive of “could” and “would”.

Latif goes out on a limb

Mr. Latif then became even bolder when asked what was unusual about last week’s floods. He told the FAZ: “Up to now, there has been material damage. Now many people are dying. That was only the case in developing countries before. If we consider the other extremes, such as the heat waves with record temperatures, we as humanity are leaving the comfort zone. Slowly it’s getting dangerous, and I sometimes have the feeling that politicians still don’t get the message.”

With that, he went quite far out on a limb. Let’s look at the facts about the flood of the Ahr. There is plenty of evidence to the contrary to his statement in the form of historical high water marks (Fig. 1), administrative reports as well as records of local researchers. 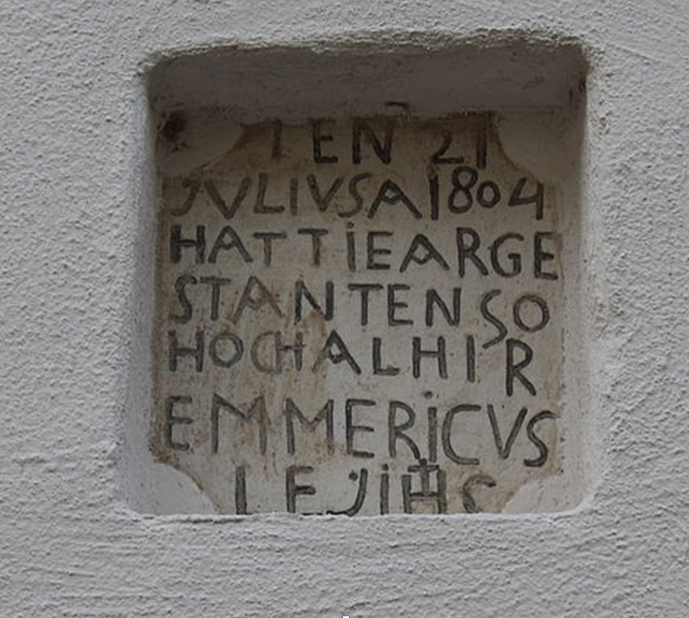 What was probably the most catastrophic flood event in recent history hit the villages along the Ahr already at a “CO2-free” time in 1804. According to the records of the then French administration, 129 residential houses, 162 barns and stables, 18 mills and eight forges were completely destroyed. In addition, hundreds of houses, barns and stables, as well as two mills and a blacksmith’s shop were severely damaged.

Vineyards and fruit trees in the Ahr Valley were largely destroyed and nearly 30 bridges collapsed. Along with numerous horses and cattle that drowned in the floods, 63 people also lost their lives.

Another catastrophic flood later occurred in 1910. Although it was not quite as powerful as the one in 1804, there was again immense damage to houses and state buildings, as well as to the Ahr Valley Railway, which was just being constructed. Interestingly, between these two historic catastrophes and the current one, the time intervals are just over 100 years.

Has flood intensity increased “due to climate change”?

The frontrunners of “climate catastrophism” in Germany – politicians from chancellor Merkel (Christian Democrats), finance minister Scholz and environment minister Schulze (Social Democrats), Baerbock (Greens), Lindner (Liberals) and Wissler (Leftists) to climate alarmist Mojib Latif and his fellow prophets – are currently exploiting the catastrophe with all their might. Elections are just two months away, and everything must be done to divert public attention from their own failures.

If one doesn’t want to fall for this, one should compare the intensity of the current event with historical examples. Here, on the one hand, the records of Thomas Roggenkamp and Jürgen Herget in the “Heimatjahrbuch Kreis Ahrweiler 2015” are helpful, where they reconstructed the so-called peak discharges of some highwater events between 1804 and 1920. For the last decades and also for the beginning of the current catastrophe, detailed records of the flood reporting service of the State Office for the Environment of Rhineland-Palatinate are available. Their homepage lists both the water levels and the so-called peak discharges of the ten worst flood events of the Ahr River in the years from 1984 to 2016. Although these measuring points are located at different places today than during the earlier floods, the spatial distances are small enough to allow comparisons. What is important here are not so much the respective water level gauge values, because these purely depend on the specific location, but the peak discharge in cubic meters/second (m3/s). This is the flow rate at the peak of the flood wave and allows conclusions to be drawn about the force and destructive power of the flow even on different locations.

Overview of the region

First, it is helpful to get an overview of the region affected by the rainfall, Figure 2: 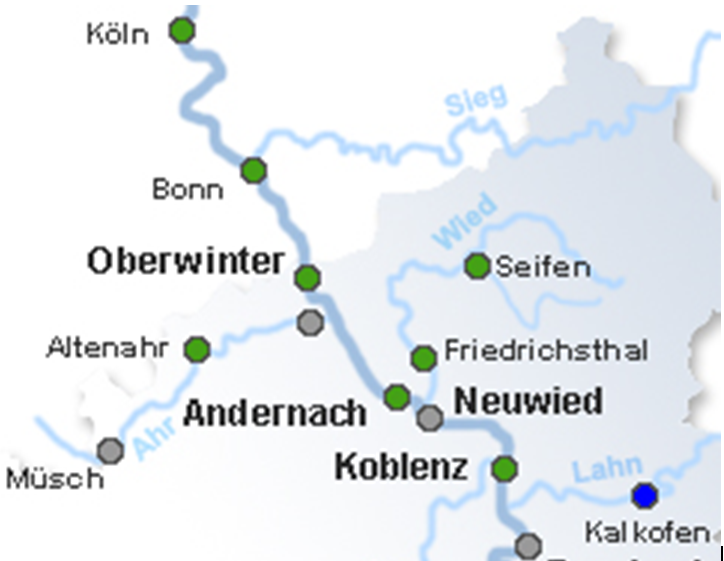 The Ahr is a river with a total length of just about 85 km. In quiet times, only some 8 m3/sec of water pass through the Altenahr gauge. In the worst flood of the last 40 years in 2016, on the other hand, at a water level of 371 cm, the flow reached 236 m3/sec, some 30 times as much. In the current flood, the maximum water level was initially given as 575 cm, and later was estimated to be well over 700 cm.

On the homepage of the flood reporting service, the following table was found showing the extent of historical flood events at the Altenahr gauge, Figure 3: 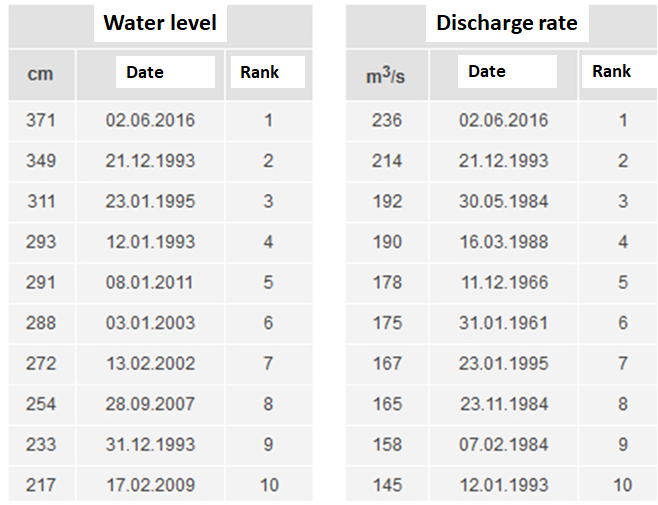 It is interesting to note first of all that at least ten highwater events have occurred at the Ahr in the last approx. 40 years, i.e. on average one every four years. The table allows us to determine an approximate correlation between water level and peak discharge with the help of Excel, Figure 4: 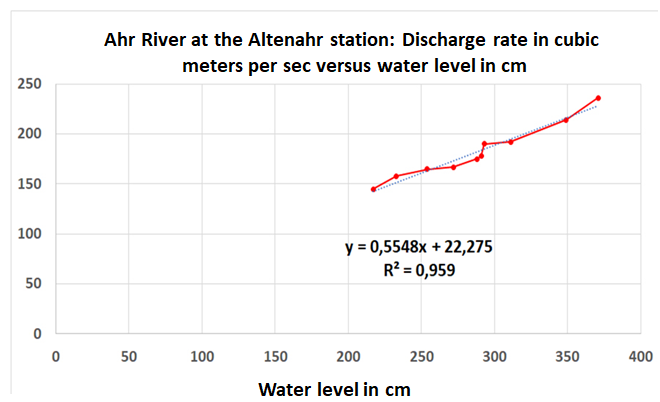 Figure 4. The approximation of the data of the flood reporting service with the help of a linear equation provides a quite good coefficient of determination R2 (Graphics: Author)

Furthermore, a maximum water level of 575 cm could be extracted from the following graph on the homepage of the flood warning service, Figure 5: 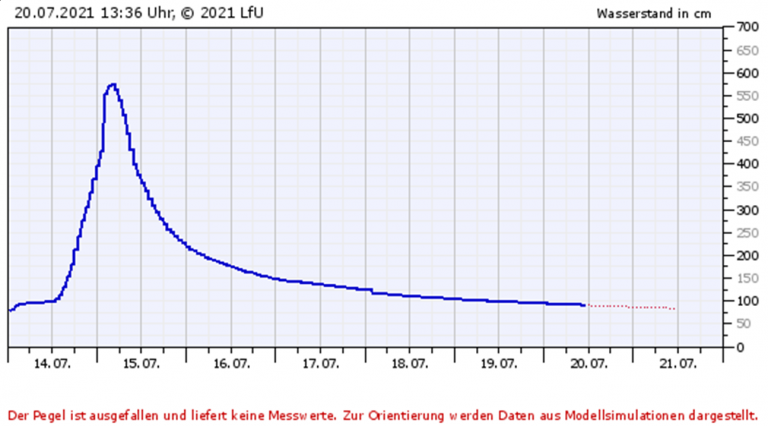 Using the water level taken from Figure 5 with the equation shown in Figure 4, we find an approximate peak discharge of 341 m3/s. Interestingly, however, Figure 5 was later exchanged for another one that same afternoon at 4:36 p.m., Figure 6: 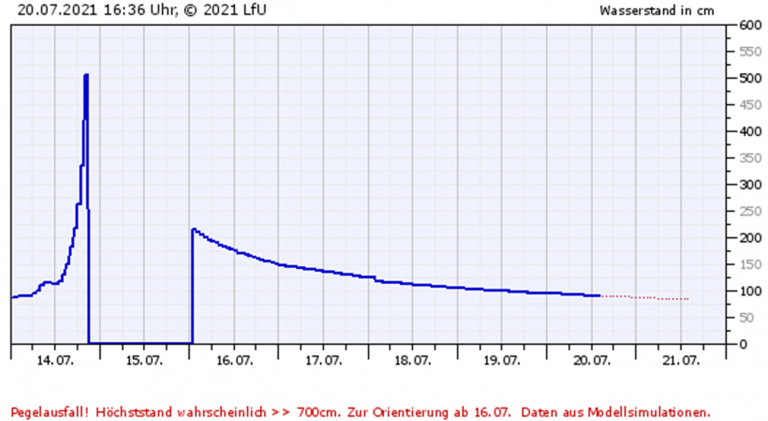 The reasons for this exchange can only be speculated. If one assumes a speculative level value of 800 cm for the equation, a peak discharge of 470 m3/s would result according to the above equation. This is almost sixty times the normal water flow.

Which flood was the worst?

As already stated, the climate alarmists are constantly telling us we are in for ever stronger and worse weather catastrophes in the coming decades because of man-made CO2.

Mr. Latif, as one of the most prominent among them, stated in the FAZ interview, referring to the disaster in Ahrweiler: “Up to today, there had been material damage. This time, many people have died. Such consequences were restricted rather to developing countries before. If we also take the other extremes into consideration, such as heat waves with record temperatures, we as humanity are now leaving the comfort zone. So slowly it’s getting dangerous, and I sometimes have the feeling that politicians don’t get it.”

Really? Let’s have a closer look at his “comfort zone with less CO2,” by looking at the flood disasters of 1910 and 1804. Thanks to the meticulousness of the local historians Thomas Roggenkamp and Jürgen Herget, we have reconstructed figures of the peak discharges for both events at hand. For the flood of 1910, the crest value is given as 585 m3/s. The 1910 flood was thus worse but nevertheless largely comparable to the one that the inhabitants of the Ahr valley had to go through now.

However, both are far overshadowed by the disaster of 1804, whose water discharge, with a peak discharge of about 1,200 m3/s, was twice as massive as the 1910 event. Compared to the current flood, the factor is almost threefold.

The fact that the damage and loss of life were so great this time is due to the fact that many more people live in the affected region today than 100 or even 200 years ago, and our possessions are worth much more than they were back then. CO2 on the other hand, virtually did not play any role back then.

In view of these facts, it becomes clear how quickly the “scientists” who constantly want to make us believe in the “climate catastrophe caused by man-made CO2” can be refuted by simple, hard reality. In 1804 mankind had produced almost no CO2 at all and in 1910 only negligible amounts of the gas. These people with their high-sounding academic titles and their fuss with complicated computer programs act as if they could predict the future for decades or even centuries. Yet they have all too obviously failed at the purely practical task of warning the inhabitants of the imminent danger. They, the politicians and the journalists who spread their messages as if they were definitive wisdom, bear responsibility: not for the fact of the flood, but for the lack of preparation and warning of the population. And this is exactly what they want to distract from with the propaganda offensive for “more climate protection” that is currently being launched in pre-election Germany on a really massive scale.