A large part of southwestern Germany’s idyllic natural landscape is about to be industrialized by 1000 “environmentally friendly” wind turbines. 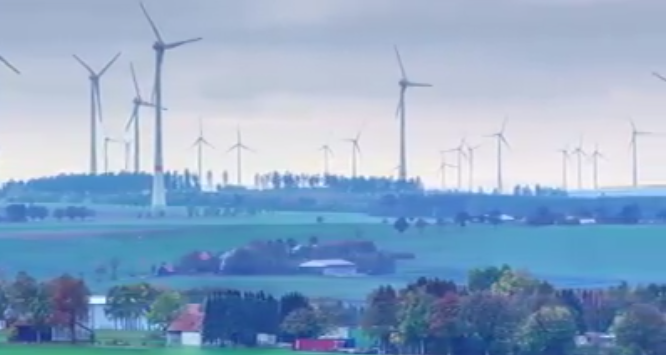 The news came only a few days after the flood disaster in North Rhine Westphalia and Rhineland-Palatinate, where it was quite obvious that a lack of flood plains was the main cause of the floods. Now policymakers have decided to destroy even more valuable forest areas and to seal the deforested ground with tens of thousands of tons of concrete.

Each wind turbine means the clear-cutting of 0.35 km2 of forest, lost CO2 and moisture reservoirs, all to be sealed by 3500 tons of concrete each for each turbine. To date, such concrete blocks have never been removed, insurmountable obstacles to deep-rooted trees and natural water control.

Moreover, two other negative impacts have been ignored by the press so far. First, scientific research that shows wind turbines slow down the wind and cause temperature increases locally, two effects that dry out the soil.

Even more serious is the health risk, and it is incomprehensible that in an environmentally and health-conscious country like Germany, medical warnings about infrasound from wind turbines are not discussed in detail, and are even systematically downplayed.

According to the current state of knowledge, the approval of wind turbines is done according to inappropriate regulations and standards, i.e. infrasound is wrongly evaluated. The medical reactions of desperate residents near wind farms, who seek protection from the agonizing sound waves, are dismissed as imaginary illnesses. Some are left with the sole option of abandoning their own homes. Yet, medical experts have been warning for some time about the harmful effects of infrasound on blood vessels and brain functions.

Currently, the global temperature increase since 1979 has been about 0.15 °C per decade (see Vahrenholt, Lüning: Unwanted Truths), the world is far from the 4 to 6 °C by 2100 predicted in the first scare stories about climate change. Moreover, according to current science, carbon dioxide is not the main driver of global warming. But scientific technical debate has become secondary today. In the group of the so-called “climate protectors” there is no willingness to question their thesis of man-made climate change.

Under these conditions, it is irresponsible to turn our country, Germany, into an industrial landscape and, moreover, to sacrifice our health and prosperity.

Just a few days ago, the Green Party has presented its so-called climate protection emergency program, which would grant a climate protection ministry a veto right against all present laws that are not Paris-compliant. Thus, a radical eco-socialist system would be imposed on Germany, with a 2.5% share of global CO2 emissions, in a rush.

On this subject, my website www.klima-diegrossetransformation.de compiles the scientific evidence, mutatis mutandis.