Increases in CH4 and N2O will have very little discernable impact.

A new publication in the International Journal of Atmospheric and Oceanic Sciences concludes that CO2 climate sensitivity has been excessively exaggerated by IPCC scientists.

A British and two German scientists collaborated for decades on the measurement of atmospheric gas concentrations using infra-red absorption spectroscopy and so they are well acquainted with the absorptive properties of those gases and are familiar with the HITRAN gaseous spectra database.

In the publication, the authors first find it is surprising that there is a wide variation in the estimated warming potential of CO2, noting that estimates published by the IPCC for climate sensitivity to a doubling of CO2 concentration vary from 1.5 to 4.5°C.

Most warming comes from water vapour

In their study, the authors’ aim is to simplify the method reaching a figure for climate sensitivity not only for CO2, but also CH4 and N2O, and to do so by determining just how atmospheric absorption has resulted in the current 33K warming and then extrapolating that result to calculate the expected warming due to future increases of greenhouse gas concentrations. 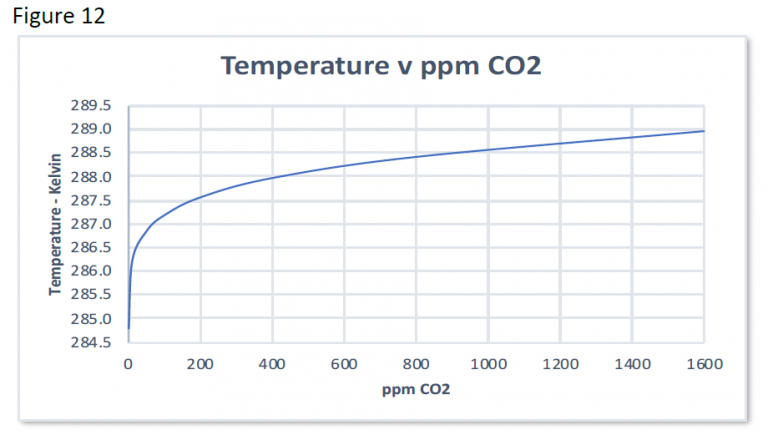 The authors conclude that H2O is responsible for 29.4K of the 33K warming, with CO2 contributing 3.3K and CH4 and N2O combined just 0.3K. Climate sensitivity to future increases in CO2 concentration is calculated to be 0.50°K, including the positive feedback effects of H2O, while climate sensitivities to CH4 and N2O are almost undetectable at 0.06K and 0.08K respectively.

No “significant changes in earth temperature”

This result, the authors say, strongly suggests that increasing levels of CO2 will not lead to significant changes in earth temperature and that increases in CH4 and N2O will have very little discernable impact. 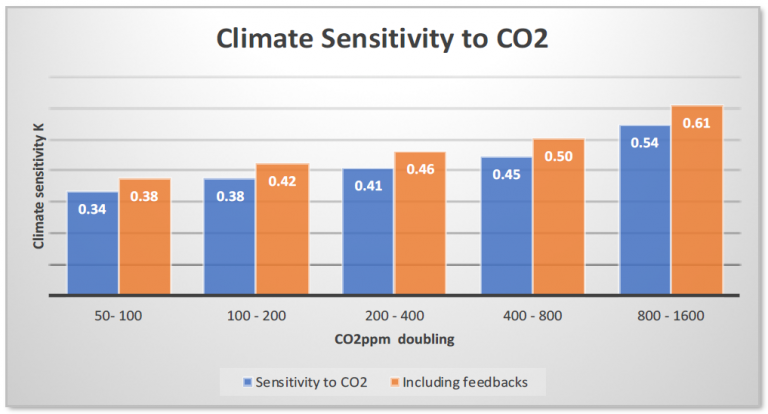 Of the 33°C warming, 29.4°C is entirely due to the absorptive effects of water vapour.

420ppm of CO2 delivers just 3.3°C of that warming, while methane and nitrous oxide are responsible for a mere 0.3°C.

Contrary to the blitz of propaganda, there is no climate emergency or even any significant increase in temperature due to increasing levels of CO2. The climate sensitivity to a doubling of CO2 is 0.45°C which increases to 0.5°C when the 12% feedback of water vapour is taken into account. A four-fold increase in CO2 concentrations to 1600ppm will increase temperatures by 1°C and it would take around 800 hundred years to reach that point at the current rate of CO2 level increases.