The German Greens, who weeks earlier surged to the No. 1 position in opinion polls, before falling back behind the socialists and conservatives, like to tell us that we have to follow the science when it comes to policymaking.

That wouldn’t be bad advice, were it not for all the absurd alarmist science out there.

She told millions of viewers that global sea levels would rise 7 meters (way over 20 feet) by the year 2100 (unless they voted for her)!

Seven meters of course is far beyond even what the most alarmist experts, like Stefan Rahmstorf of the Potsdam Institute or the NOAA project. 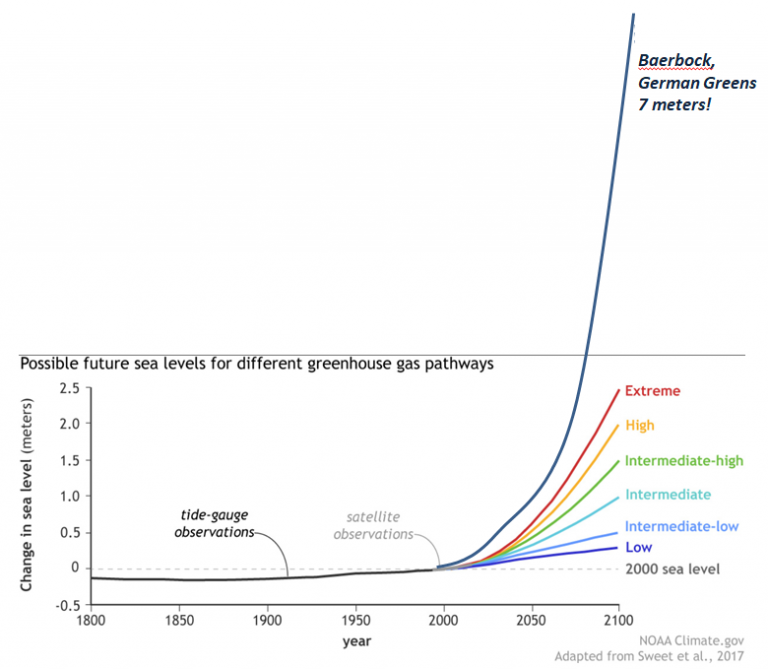 Chancellor candidate Annalena Baerbock’s grossly absurd sea level rise projection compared to scenarios by the NOAA. Many scientists see a rise of only under 0.4 meters, which is a tiny fraction of Baerbock’s preposterous 7 meters.

“The Greens, a party of science? We have deliberately refrained here from evaluating the three encounters between the candidates for chancellor and the candidate so far. We will make an exception for the last debate before the election. It is about a statement by Annalena Baerbock that the sea level will rise by 7 meters by 2100:

She presumably means the rise in sea level; we  chalk it up to her word-finding disorder. Baerbock was apparently referring to a study by the Potsdam Institute for Climate Impact Research and a university in Norway. The study has been circulating since May. It contains everything one might expect from PIK, namely many tipping points and lots of subjunctives.

Baerbock, however, took it at face value and not as a scenario, by the way, one that the IPCC in its latest report does not even provide for according to the most implausible scenario RCP 8.5. What a pity that the moderators do not prepare themselves for such a program and intervene immediately. Thus, many viewers will probably have already taken a look at the elevation maps of their place of residence, because Annalena Baerbock proclaims an outsider’s thesis as the new truth. It lies thereby however around the factor 7 over the already unrealistic prognosis of the IPCC. No matter, just go after votes with a little fear.”