Shocking threats in Germany…250 on a ‘death list’ are predominantly prominent German conservatives and libertarians, but also include Jews – among them one Holocaust survivor!

Last Thursday, September 23, a “list of the 250 biggest German misanthropes” began circulating on the Internet and suggested their death  as a solution.

The list included critical writers, publicists, doctors, politicians and stars from several political parties who have criticized this or that measure of the Merkel government.

According to Swiss publicist Roland Tichy, who is on the list, the only consistent common ground is that these people have expressed themselves critically on a variety of issues like immigration, green energies, COVID vaccines and lockdowns.

“Any criticism is dangerous,” says Tichy.

The list is reported to also include German actor Til Schweiger and pop superstar ‘Nena‘ and is suspected to “likely to have been penned by left-wing extremist circles, reports the Austrian exxpress.at. “The authorities are already investigating.”

Earlier, prominent German ZDF public television contributor Jan Böhmermann started such lists. Many of the names on the latest death list are from his lists.

“I have received several death threats. So far, I have not reacted to them, but I have reinforced doors, secured windows, changed my address,” writes Tichy at his site.

Böhmermann recently popularized the term “misanthrope” in a public discussion with late-night German talkshow host Markus Lanz to forcibly discredit critical positions and people and to exclude them from the discourse. Böhmermann, financed by mandatory public television fees imposed on citizens, introduced the creation of enemy lists, which especially include critics of lockdowns, medical segregation and the COVID vaccines.

“This shows how irresponsibly public television now deals with agitators and haters in their own ranks,” reports Tichy. Böhmermann of the ZDF even (jokingly) called for the murder of publicist Roger Köppel of the Zurich-based Weltwoche, a conservative publication.

“We cannot document the list and the text that goes with it, because we would possibly make ourselves liable to prosecution,” Tichy adds. “For me, it is an expression of the tremendous brutalization of the left-green milieu that dominates this country. I consider it an honor to be on this list.”

Preemptive murder to save future lives?

Conservative Birgit Kelle, also on the list, tweeted an excerpt of the message accompanying the “death list” of the “250 greatest enemies of humanity”: 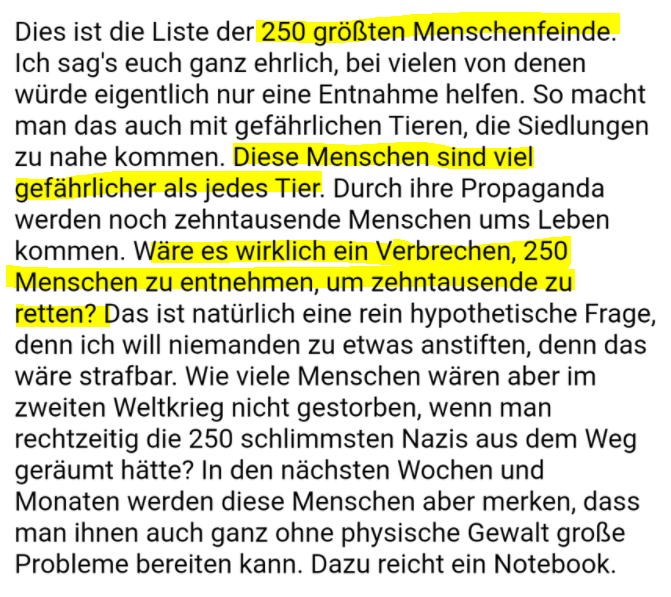 In the excerpt, the author asserts that the 250 people “are much more dangerous than any animal” and then goes on to wonder: “Would it really be a crime to eliminate 250 people in order to save tens of thousands?”

COVID lockdown critic and independent journalist Boris Reitschuster, also on the list, added a postscript at his site here:

PS: Andrea Drescher, daughter of Jewish concentration camp survivors, just wrote me about this article: ‘On the death list of evil Nazis, besides Henryk Broder and Elias Davidson, two Jews living in Germany, there is also Vera Sharav, a Jewish Holocaust survivor. So Jews are once again being threatened with death by Germans because they don’t fit a narrative. A detail that may have escaped you. Half my circle of acquaintances is on the list, about 100 I know personally. I don’t even know what to say to that anymore!”

Let’s hope that the German authorities rise above politics and do their jobs and root out the author(s) of this dangerous threat. Some parts of history don’t need repeating.