Scientists continue to affirm the critical role of clouds in modulating the Earth’s energy budget, and, hence, the climate. 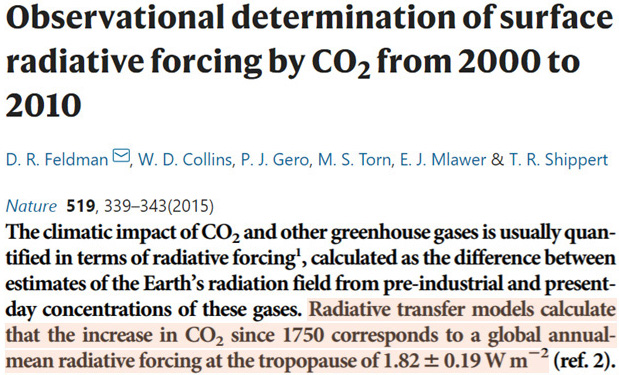 On a per-decade basis, a 22 ppm rise in CO2 – realized about every 10 years in recent decades – is associated with a forcing of just 0.2 W/m² (Feldman et al., 2015), but only when the sky is clear of clouds. And cloud-free skies are rarely ever observed in the real world atmosphere, as “less than 10 percent of the sky is completely clear of clouds at any one time” (NASA, 2015).

In a new study published in a Nature journal climate scientists Dr. Svensmark and colleagues have determined that cosmic rays, or variations in ionization, are strongly linked to the formation of aerosols and clouds, and that “low liquid clouds are mainly responsible for the change in net radiative forcing.”

The decreases in ionization during cosmic ray minima have been observed to occur over 80% of the globe in a matter of days, with the primary responses over the Earth’s oceans. Thus, the response is global in scope.

The magnitude of the effect of solar activity is large, as “Earth absorbs almost 2 W/m2 extra energy within 4 to 6 days of the cosmic-ray minimum” according to the press release for this study. That is the same total net forcing impact in a few days that it takes CO2 270 years to exert. 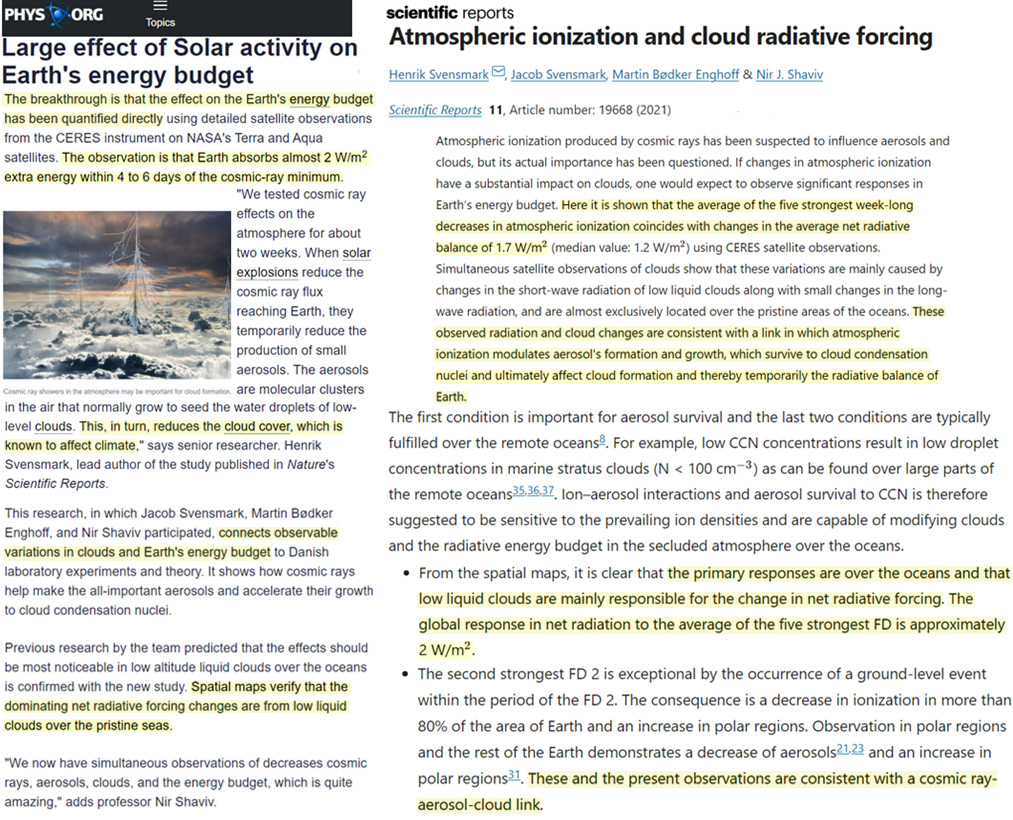 In polar regions, the impact of clouds is even more profound. Within just a few days the downwelling shortwave radiation can vary by as much as ±150 W/m² due to changes in cloud conditions (Djoumna et al., 2021). 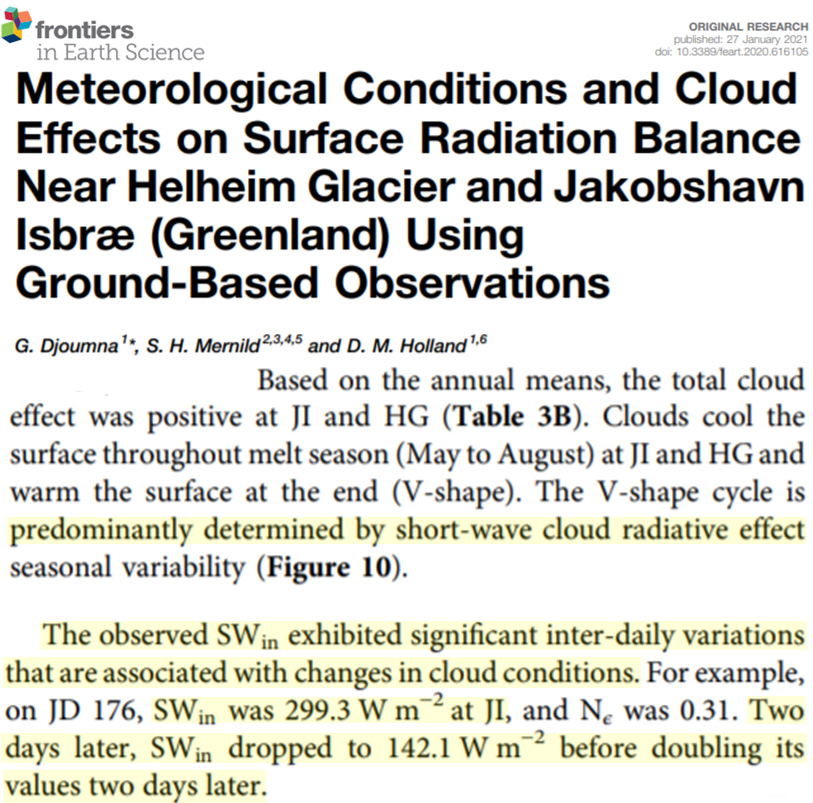 “Clouds may be the most important parameter controlling…the Earth climate”

Many more scientific studies published in 2021 affirm changes in cloud cover exert the most dominant impact on climate by modulating the Earth’s energy budget. Some of these papers are listed below.

“The clouds represent a key element within the terrestrial climate system. In fact, clouds may be the most important parameter controlling the radiation budget, and, hence, the Earth climate (Hughes, 1983). This is related to the fact that clouds have a paramount importance in the radiation balance at global scale, especially due to their albedo (Ohring and Clapp, 1980).”

“Cosmic rays affect cloud cover variation. Clouds reflect both the incoming solar radiation flux upward and the earth’s thermal radiation back to it. Thus clouds control thermal energy input to the lower atmosphere and establishes a link between cosmic rays and the terrestrial temperature.”

“Model runs corresponding to past climate show a substantial decrease in low clouds and hence planetary albedo compared with present, which contributes 40% of the required forcing to offset the faint Sun. Through time, the climatically important stratocumulus decks have grown in response to a brightening Sun and decreasing greenhouse effect, driven by stronger cloud-top radiative cooling (which drives low cloud formation) and a stronger inversion (which sustains clouds against dry air entrainment from above). We find that systematic changes to low clouds have had a major role in stabilizing climate through Earth’s history, which demonstrates the importance of physical feedbacks on long-term climate stabilization, and a smaller role for geochemical feedbacks.”

“Cloud acts as an important and uncertain factor in climate change prediction and simulation (Duan and Wu, 2006). It plays crucial roles in the Earth–atmosphere energy and radiation budgets. Warren et al. (2007) reported significant negative correlations between the summer total cloud amount and surface temperature in the North Hemisphere. The decreased total cloud amount contributes to warming over Tibet (Duan and Wu, 2006; Guo and Wang, 2012). Tang and Leng (2012) emphasized that clouds are an important local factor that adjusts the temperature variation in Eurasia.”

“Clouds are an important factor that influence summer temperature via the energy budget and global hydrological cycle (Tang and Leng, 2013; Yang et al., 2020).”

“Warming and decreased precipitation in the past two decades are primarily related to cloud amount changes.”

“COD [cloud optical depth] variations therefore have a non-negligible impact on the surface radiative balance. For 0-60∘, for example, there is an approximately 200 W/m² difference in SWd [downwelling shortwave] between the optically thinnest and thickest clouds. This translates into a total shortwave cloud forcing that ranges between −20 and −60 W/m², assuming an albedo of 0.8 (typical of the N-ICE campaign April–June period). This range is significant when it is contrasted to the typical longwave forcing of ≈60 W/m²: even for 0-60∘, only the optically thickest clouds could contribute to cool the surface during the April–June N-ICE2015 campaign period.”

“The surface impact of Arctic clouds is also seasonally variable. In October and November, clouds warm the surface: 2 m temperatures associated with cloudless profiles are up to 8 K colder than those associated with profiles containing at least one low cloud.”