A mysterious death increase has recently gripped Germany as the number dying in late November surges 25%…cannot be explained by COVID.

Regular NTZ contributor Kenneth brought my attention to the latest 2021 death statistics for Germany. There have been reports of mysterious excess mortality late this year which cannot be explained by COVID 19.

At its site, the Office reports that death figures were below the median of the previous years in February and March and stayed within a normal range until about October. Then something mysterious seems to begin taking place. 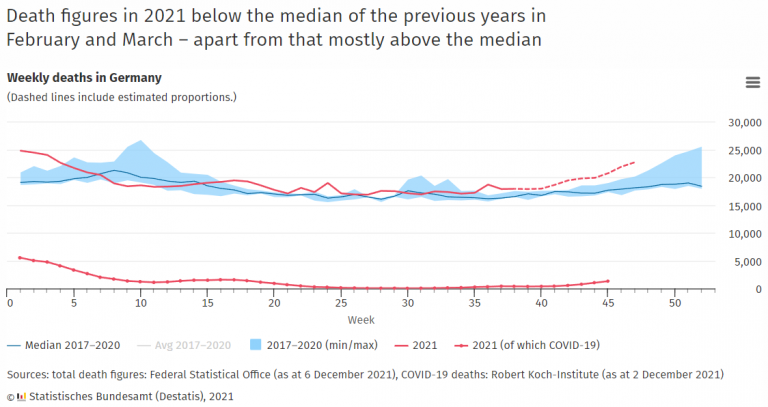 Since week no. 40, deaths have surged – as if the collective immune system has gone into some sort of fail mode.

In September and October (+10% each), death figures markedly surpassed the median of the preceding years again. The COVID-19 deaths reported can only partly explain this development. The mortality figures so far available for November exceed the comparative value to an even greater extent. Death figures in the first two weeks of November (1 to 7 and 8 to 14 November) were 16% and 17% and in the third and fourth week (15 to 21 and 22 to 28 November) 23% and 25% above that value. Since mid-October, the number of COVID-19 deaths reported to the Robert Koch Institute (RKI) has increased again markedly, too.”

In Germany and worldwide, the activity of other respiratory diseases like influenza was reported to be at a very low level in the 2020/2021 season. The intensity of flu waves in the past was also reflected in the total death figures and resulted in an increasing curve during the winter months. As there was almost no flu effect in the 2020/2021 season, the total death figures fell below the median of the previous years in mid-February 2021, despite the new COVID-19 deaths.”

For the surge since week 40, the Office offers no explanation. Deaths from the recent COVID outbreak only partially explain the rise. Other sicknesses have to be involved.