Warming Could Lead To Fewer Tornadoes… Trend Has Been Downward 70 Years, Less Damage

A rational look at the data and physics tell us there are no real signs that tornadoes are going to get more frequent and worse.

German Die kalte Sonne’s 2nd part of its most recent video looks at tornadoes, a ferocious and extremely destructive meteorological phenomenon that global warming alarmists claim will only get worse and worse. They want6 you to panic over it.

But Die kalte Sonne’s video report notes that a number of sources say that trend has yet to materialize. Many statistics in fact have shown the opposite is happening: 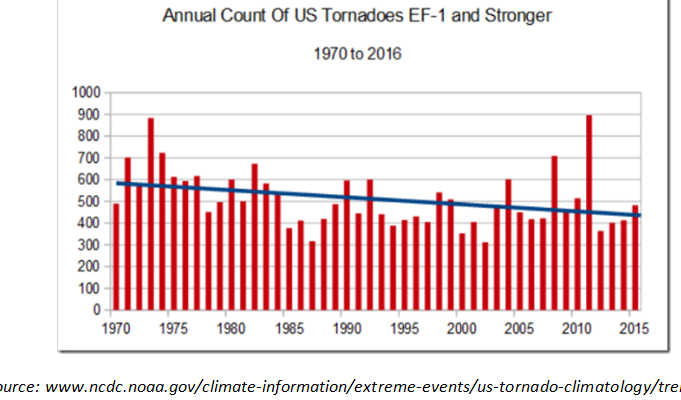 The ideal conditions that lead to the formation of tornadoes are lower warm moist air clashing with cold dry air moving above. The conditions are common in the springtime, when warm, humid air from southern USA clashes with a cold air mass blasting in from the north. Yet, should the these cold masses of air warm up, then this would lead to a smaller temperature gradient and thus be less favorable for tornadoes to form.

According to Die kalte Sonne, with respect to tornado frequency and intensity: “The future remains unknown.”

Die kalte Sonne also presents a chart by Roger Pielke Jr., showing that tornado damage in the United States has in fact been trending downward as well over the past 70 years, this likely also in part due to improved early warning systems and better infrastructure: 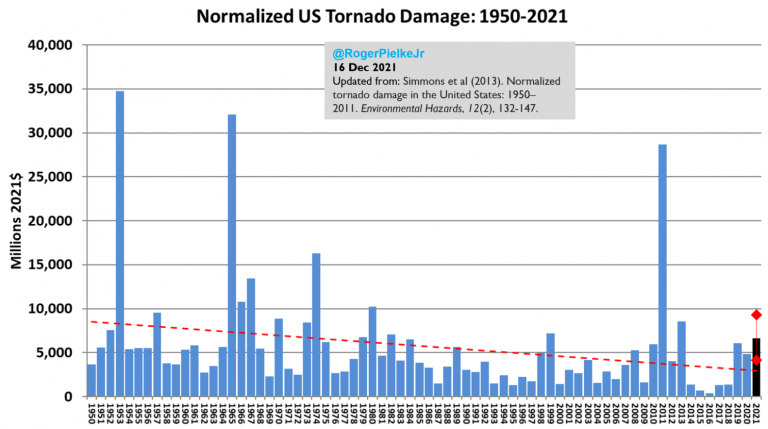 The tornado debate, which heats up every time severe activity occurs, remains completely undecided when it comes to what the future holds. But so far, the data have been pointing in a direction that is opposite to what the alarmists have been claiming – so on’t let the fear-mongers scare you.

You can donate easily to Die kalte Sonne via Paypal here.
In case you prefer a bank transfer, write to: spenden@kaltesonne.de

14 responses to “Warming Could Lead To Fewer Tornadoes… Trend Has Been Downward 70 Years, Less Damage”