Failure to correct the “coarse temporal resolution” of  pre-1970s maximum daily rainfall data changes the sign of trend analysis from slightly positive to solidly negative in the last century (1921-2020).

Those who ascribe to the position that humans can control the weather by engaging in fossil-fuel related activities (such as using planetary-heating smartphones) literally believe humans significantly determine how much rain falls in a 24-hour period at a specific location. Humans-can-control-the-weather proponents consequently expect trends in extreme daily rainfall to rise as humans heat the planet with cheeseburgers.

It is common knowledge that when looking for data to confirm one’s hypotheses, the confirmation bias often wins. When we expect to find humans exert significant control over weather patterns, the data we expect to find emerges and the data that do not support our expectations are glossed over – or ignored altogether. 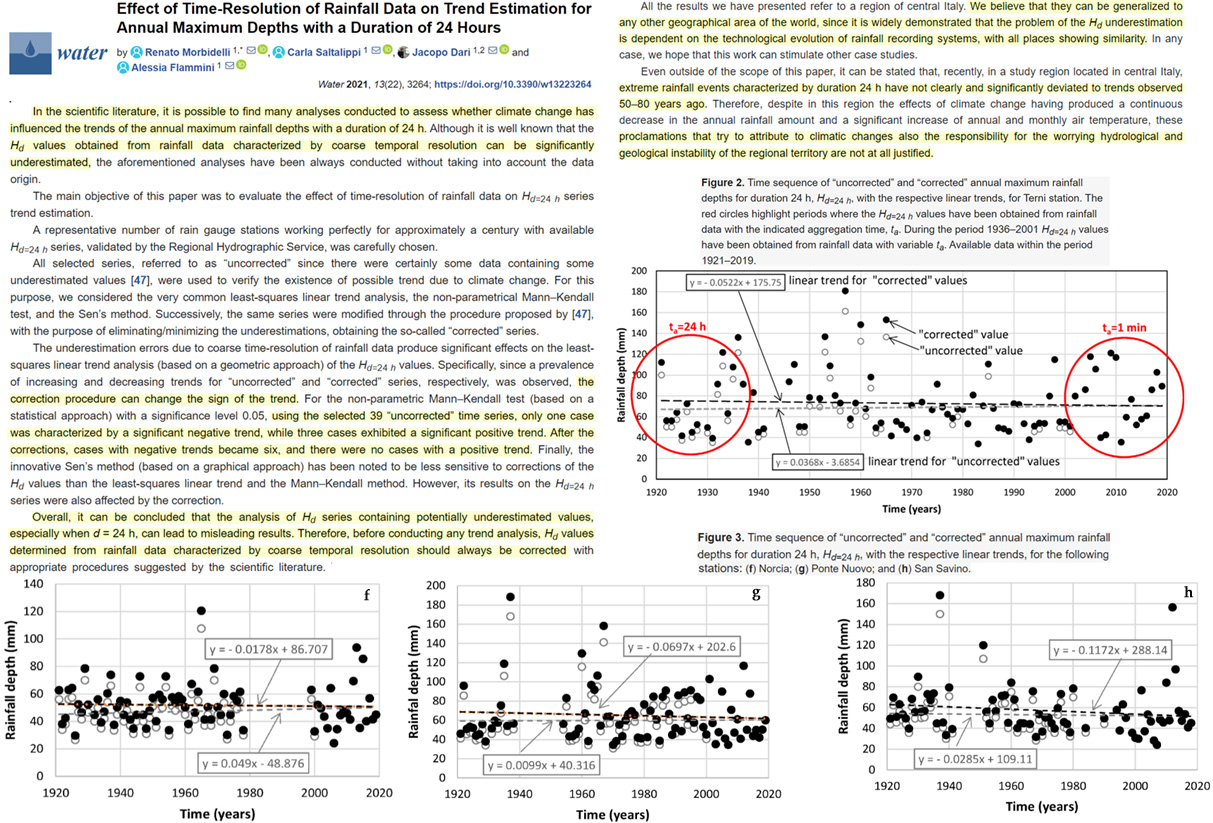 Per a new study (Morbidelli et al., 2022), it is “well known” that the annual maximum rainfall that accrues over 24-hour period time frames can be “significantly underestimated” due to less precise reporting methodologies in older precipitation records relative to recent decades.

Consequently, the precipitation data from the pre-satellite era often lack the necessary resolution to directly compare the long-term past to the recent without properly correcting the older records first.

The authors – strong proponents of anthropogenic global warming – found that correcting the coarse resolution in data from the pre-satellite era has a significant, sign-changing impact in extreme precipitation trends over the last century.

For example, when using the uncorrected time series, there were 3 cases of significantly rising trends and only one case of a significantly negative trend in extreme precipitation from 1921-2020 in the region studied (central Italy).

Upon correcting the coarse resolution from the past, the positive trends disappeared from 3 to zero and the significant negative trends in extreme daily precipitation increased from one to 6.

Per the authors, these results “can be generalized to any other geographic area of the world” since it is “widely demonstrated” that the problem of underestimating past extreme daily rainfall is fundamentally associated with the lower-resolution recording methods.

Even without the corrections, Morbidelli and colleagues point out that “extreme rainfall events characterized by duration 24 h have not clearly and significantly deviated to trends observed 50-80 years ago.”

And with corrections to the older data, this is their conclusion:

“[P]roclamations that try to attribute to climate change…the responsibility for the worrying hydrological and geological instability of the regional territory are not at all justified.”