Spring is supposed to be arriving earlier, according to global warming claims, and so winters are supposed to be starting later and finishing earlier. Today we look at March mean temperature data for the United Kingdom and Ireland.

First we look at the data for the 14 temperature stations in the United Kingdom and Northern Ireland for which the Japan Meteorological Agency (JMA) has enough data to plot, going back to 1989.

As we can see, 10 of 14 UK stations show no warming or even a cooling trend. This is not what we’d expect from a rapidly warming planet.

Of course the globe has warmed since the start of the industrial revolution, and man most certainly has played some role in that warming. But the dispute is about what the main cause has been and whether or not it’s going to lead to catastrophic climatic tipping points.  The alarmists say all the warming has been due to man and planet is going to boil over pretty soon.

The skeptics, on the other hand, take a far less alarming view, and use volumes of scientific data (which the alarmists like to ignore) to show that natural factors like solar and oceanic cycles remain the primary drivers behind the recent warming and that a climate catastrophe is all hype and hysteria.

Ireland has had no March warming in 4 decades.

Next we look at the Republic of Ireland, where we plot the JMA data from 6 stations: 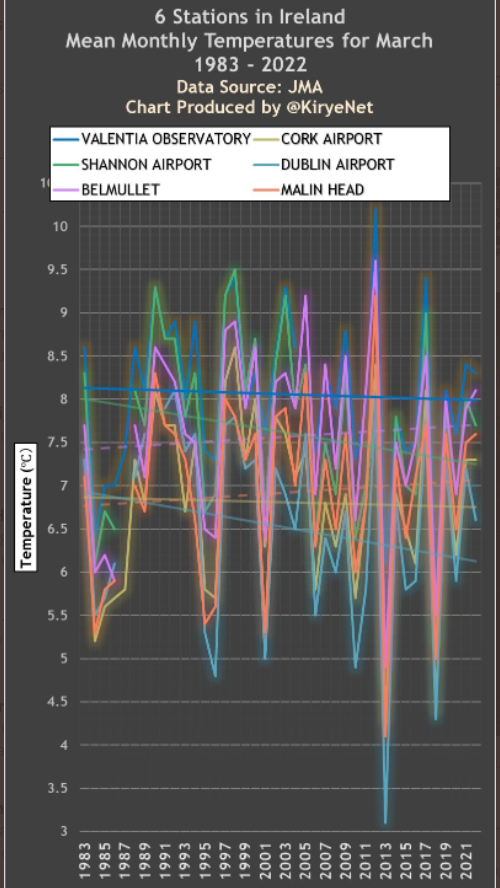 In Ireland, March mean temperatures have warmed modestly at only 2 of the six stations, while the other 4 have cooled a bit. Taken altogether, nothing alarming has happened in Ireland over the past 4 decades, and there’s no sign anything dramatic is going to happen anytime over the coming decades.

This is the story we see at a number of countries across the world whenever we crunch the untampered data from the JMA. Nothing frightening is happening to our climate other than that it’s been behaving normally (tempestuous). That means we will continue to see weather extremes just like we have seen them throughout the Holocene.

Alarmist douchebags want you to panic so that you’ll let them boss you and the rest of the world around. But they and Greta Thunberg aren’t going to rescue us from anything. To the contrary, they’re just going to create a giant socioeconomic mess with their idiotic Great Reset.