Several new and recent studies have affirmed that the waters surrounding South America – from Peru to Chile to Argentina to Brazil – were several degrees warmer and sea levels multiple meters higher than today until the Little Ice Age centuries. 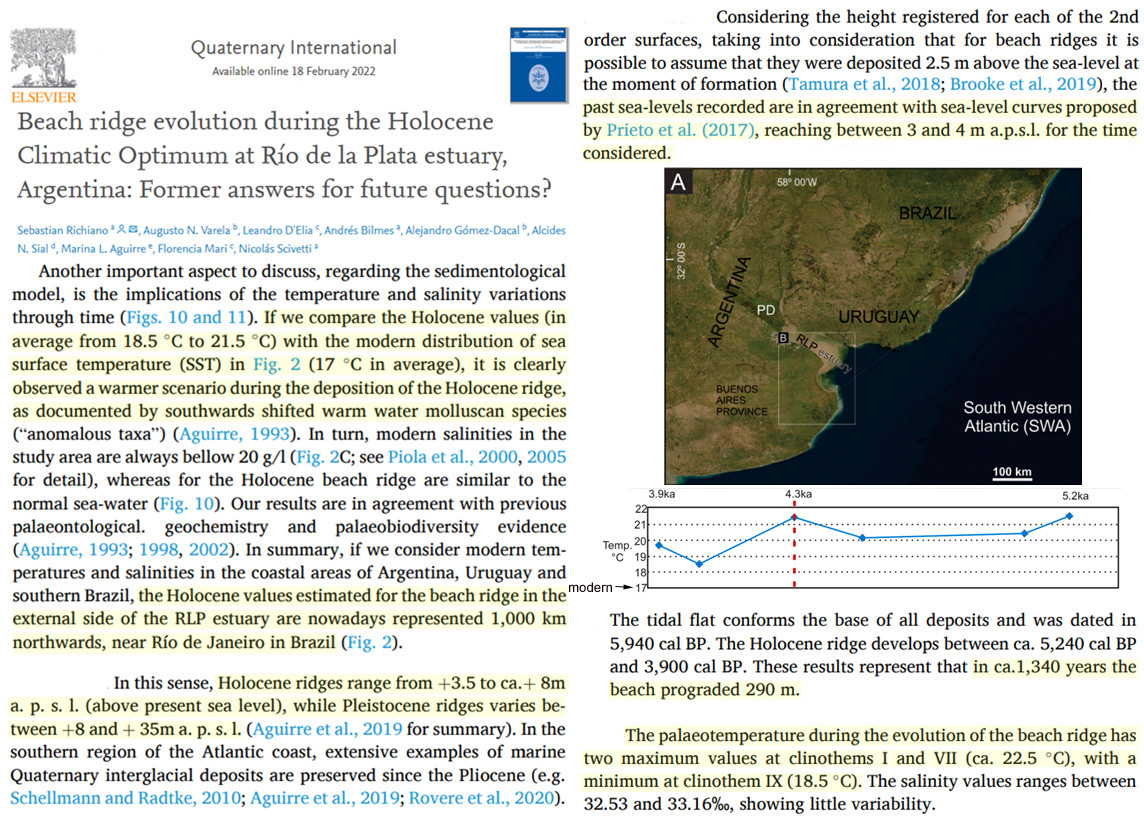 Another new study affirms that the coast of Brazil in the equatorial Atlantic has been expanding seaward both in recent centuries and for the last several millennia. Relative sea level was between 3 and 4.6 m higher than today between 7,000 and 5,000 years ago before rapidly receding to today’s levels.

A rock formation has biomarker (corals) evidence that sea levels were still ~2 meters higher than today as recently as “908 to 748 cal aBP” (see photo). 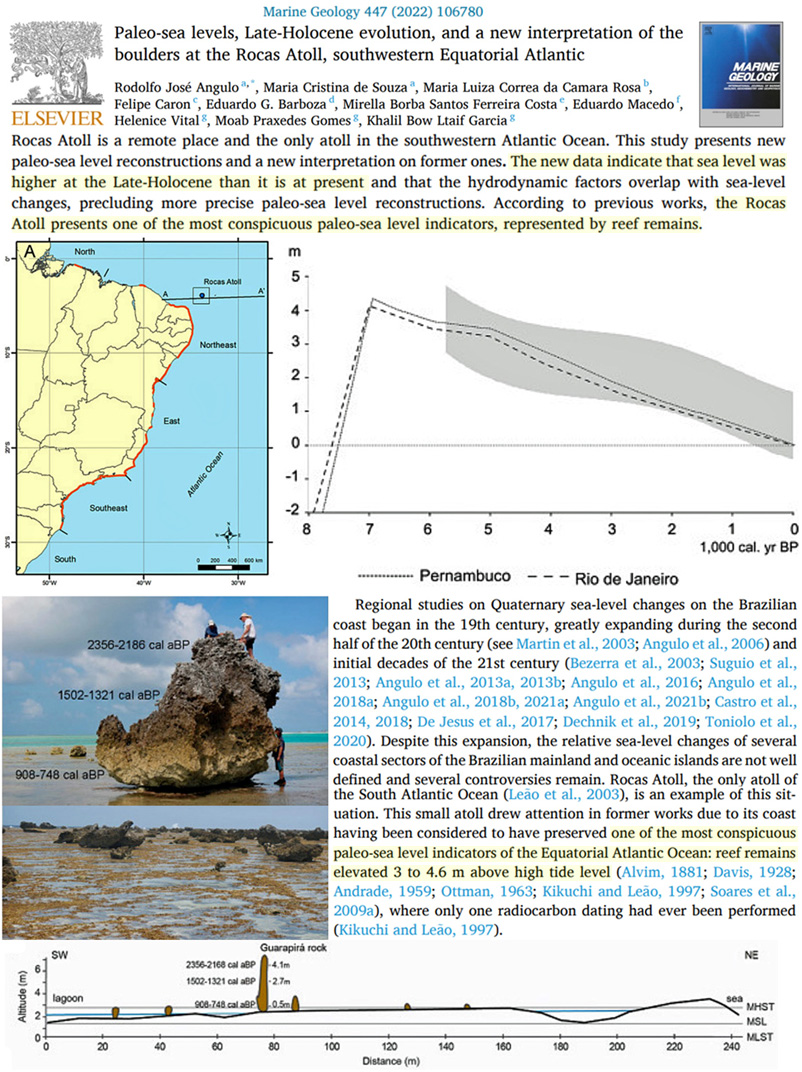 A 2021 study (Cruz et al.) used microvertebrate fossils to determine Pampas, Argentina’s surface temperatures were “between 1.7°C and 4.4°C…higher than the current” during the 19th century. 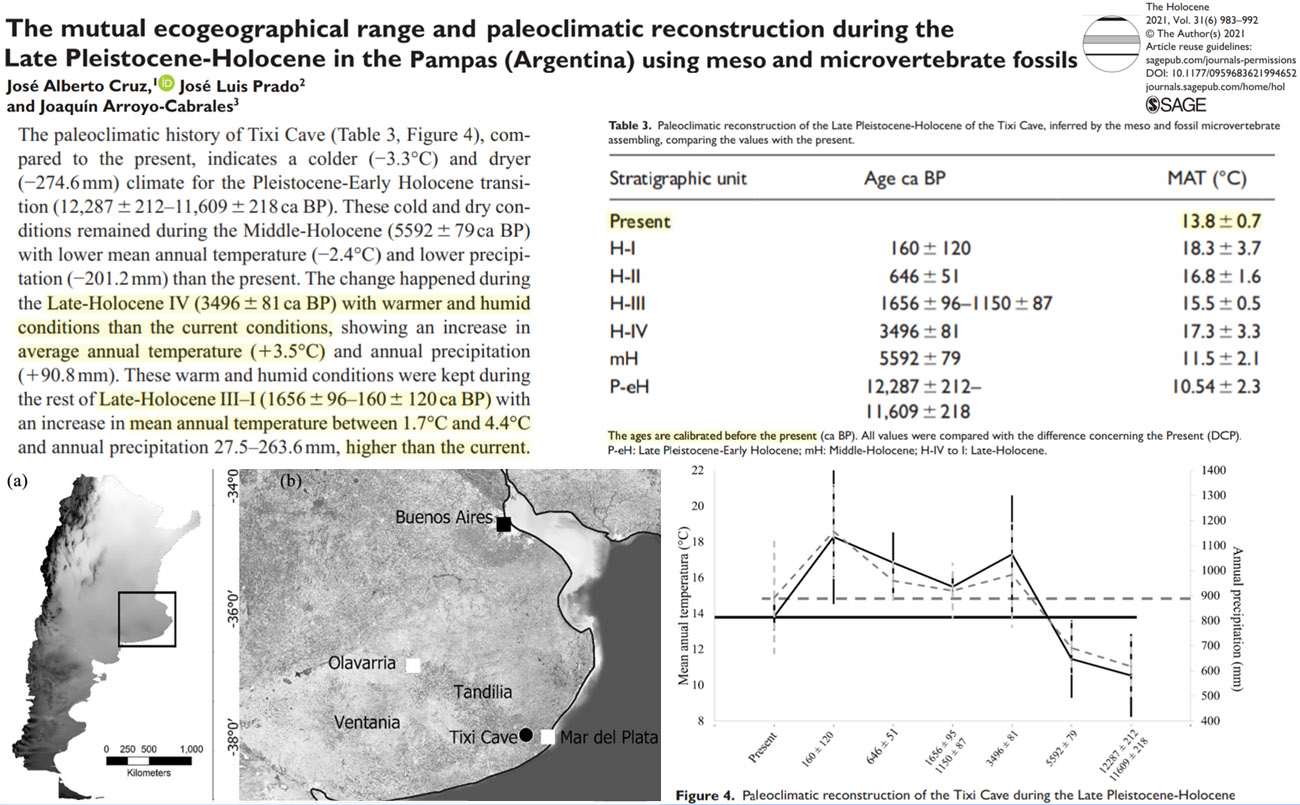 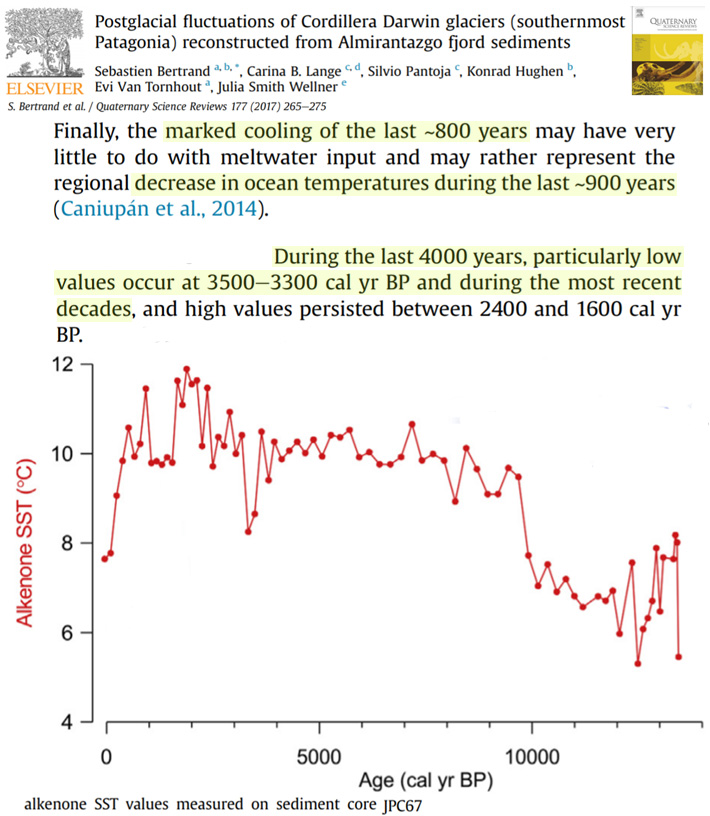 Also in the last 900 years (“since ~0.9 cal ka BP”) Chilean sea surface temperatures (SST) have undergone “a very strong decrease in SST of ca. 2°C…over a period of ~300 year” (Caniupan et al., 2014), and the colder temperatures have remained “comparatively low” to the present. 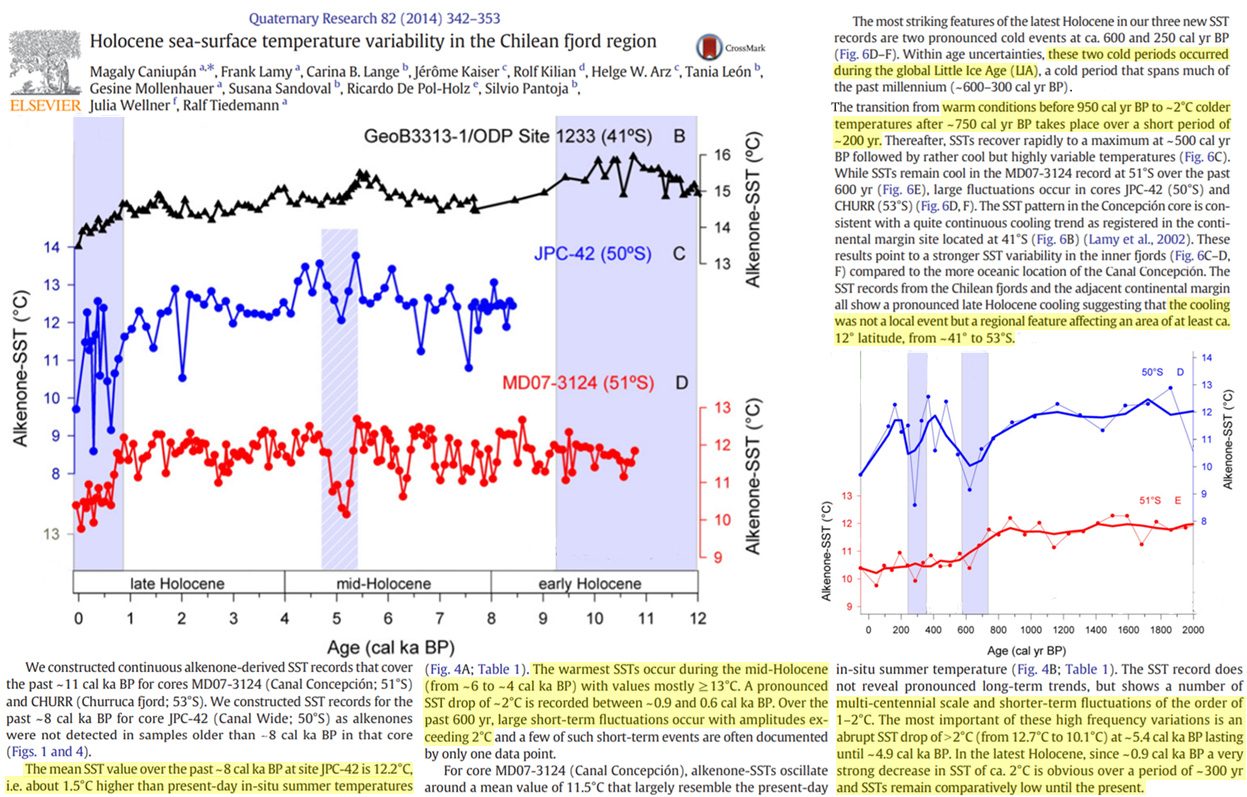 Another reconstruction of southern Chile’s sea surface temperature record has temperatures falling 2.2°C over the last 1,000 years, or from 14.3°C during the Medieval Warm Period to 12.1°C today. SSTs were still about 1°C warmer than today during the 1600s before abruptly falling to today’s colder temperatures. 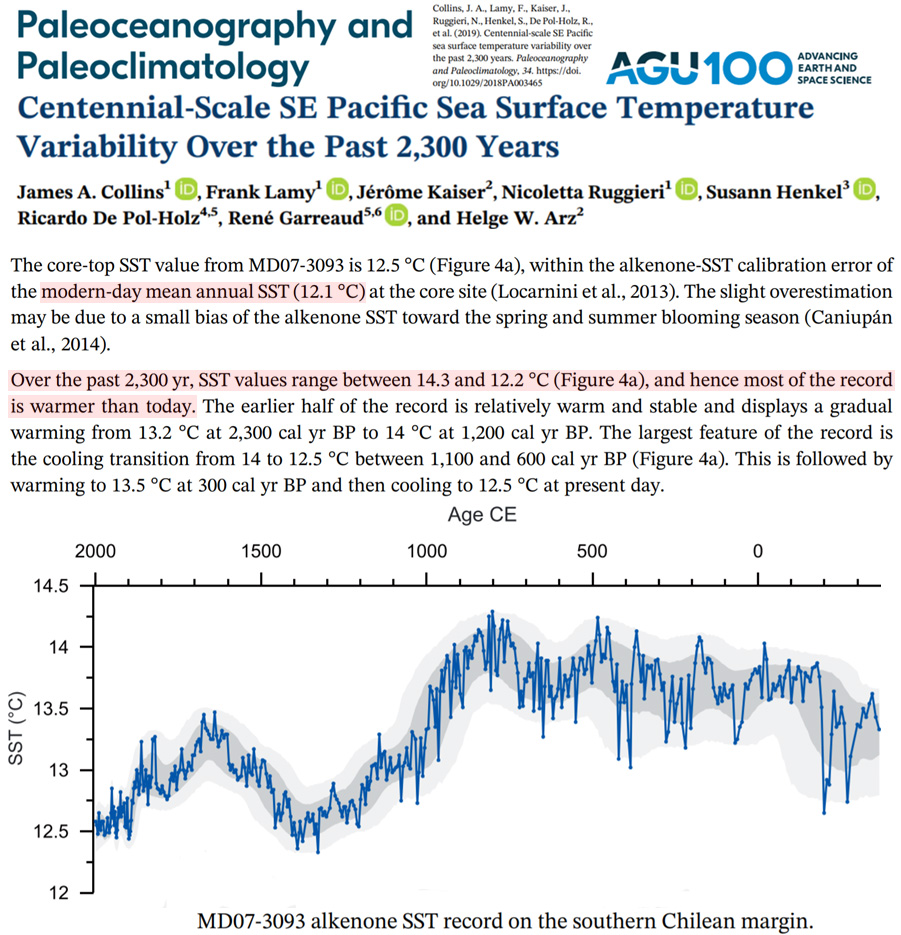 Sea surface temperatures along the coast of northern Peru were “~4°C warmer than present-day SST” during the last 3 to 4 millennia before rapidly cooling to today’s much colder temperatures (Salvatteci et al., 2019). Notice the reconstructions in both “i” and “j” indicate the SSTs of the most recent 50 years (black stars) are the coldest of the last 10,000 years. 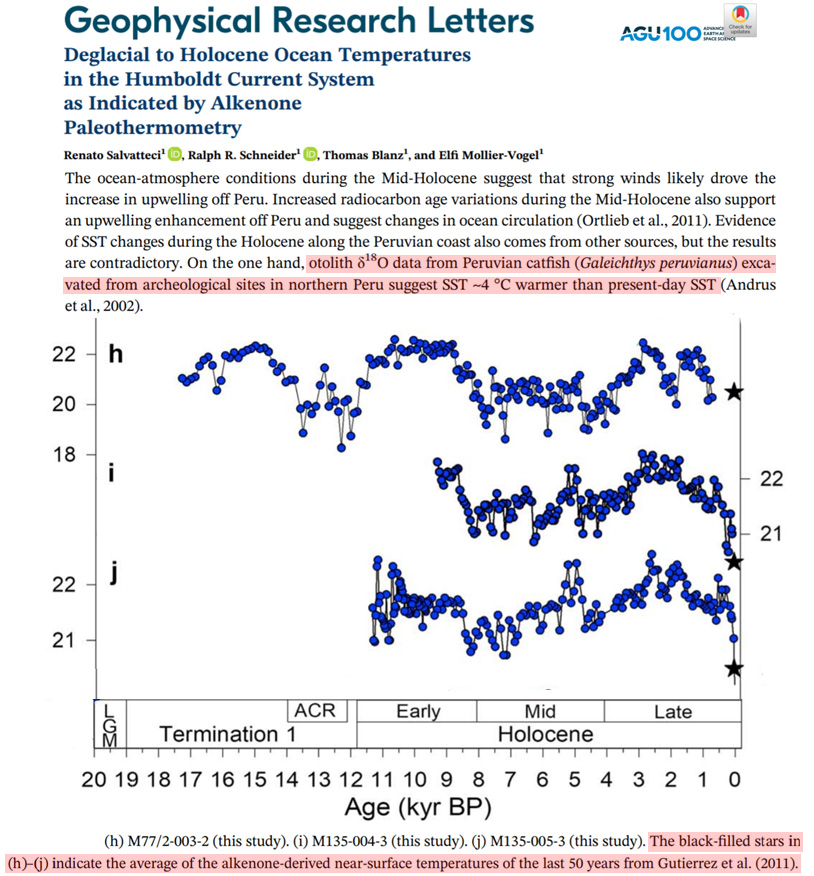 The presence of hake fish remains at 53°S (southernmost South America) dating to the Middle Holocene suggests temperatures needed to have been 11-12°C at that time given the warmth demands of this species (Bas et al., 2020). This latitude now has SSTs 4-5°C colder (7°C) than the Middle Holocene, and hake can only be found in waters north of 47°S today. 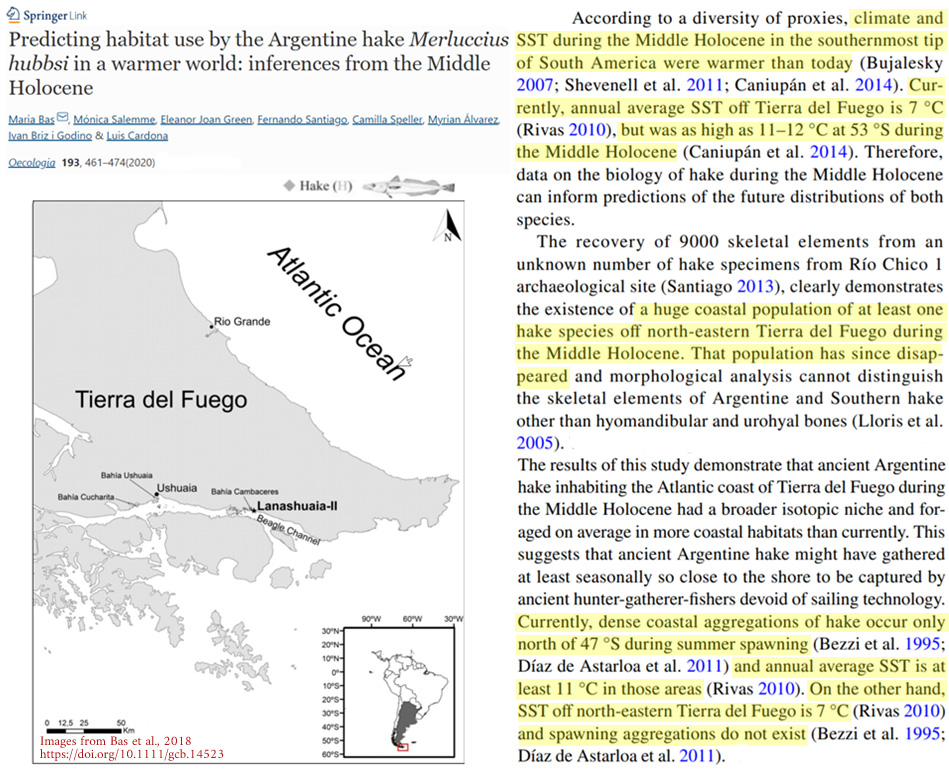 Sea levels along the coasts of Brazils reached “up to +5 meters [higher than today] between 6 and 5 ka b2k” (Lopes et al., 2020). The presence of a warmth-demanding shark species remains at latitudes much colder than the water temperatures they can tolerate today also suggests regional SSTs were much warmer a few millennia ago. 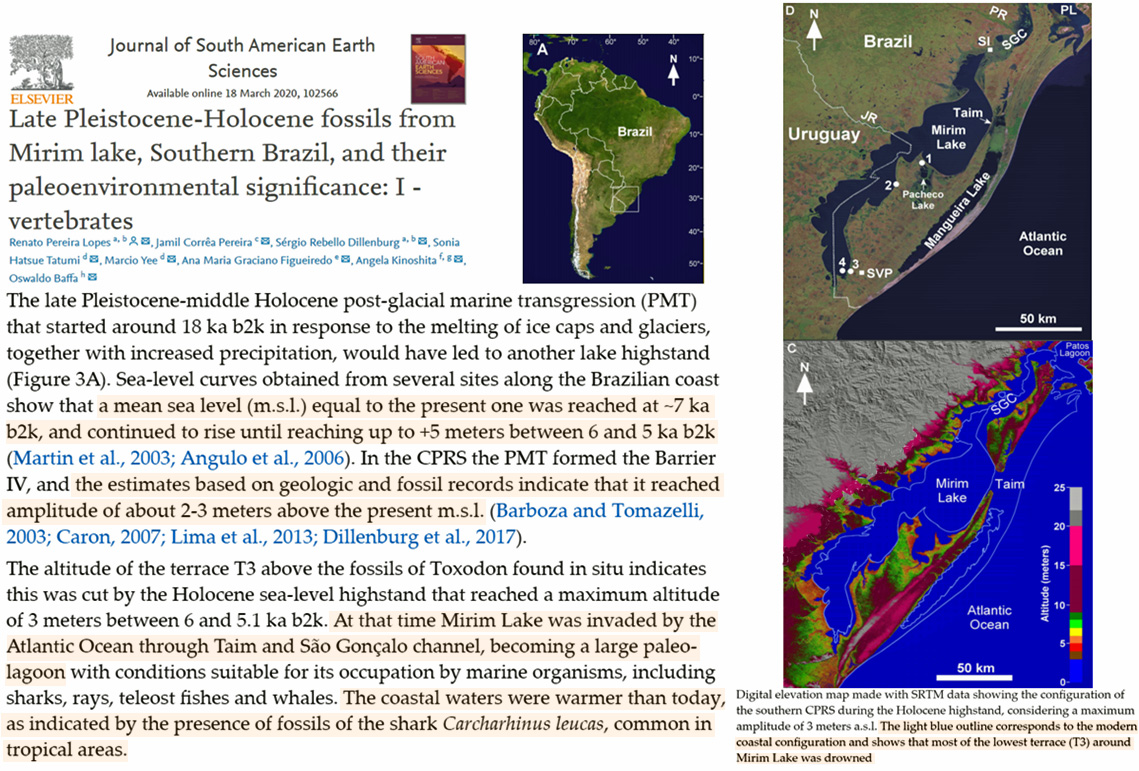