Problem no. 1: The Paris Accord is non-binding

The Paris Accord in fact has been signed by only 61 of 191 nations and so pledge to reduce their emissions, i.e. more than two thirds of the globe’s nations are not obliged to do anything.

This will simply allow the rich signatories to outsource their emissions to unconstrained nations. China and India both end up with a free pass. The Paris Accord will have no effect on global emissions and citizens of rich countries will be forced to make huge sacrifices. We’re seeing it today already.

Problem No. 2: EU targets are “utopian”

The former IFO head calls the EU’s targets “utopian” and adds: “Germany at the same time wants to exit coal and nuclear power, thus making itself dependent on other nations.” Like Russia.

The belief that the EU can power itself solely using volatile renewables like wind and sun is kept alive purely by “propaganda media”. In fact it is doomed to fail.

Prof. Sinn explains that another major problem is: “Electricity from wind and sun is too volatile to assure an affordable and complete power supply. Even if Germany doubles it’s current wind and solar production capacity, doing so will only double the volatility of the supply: 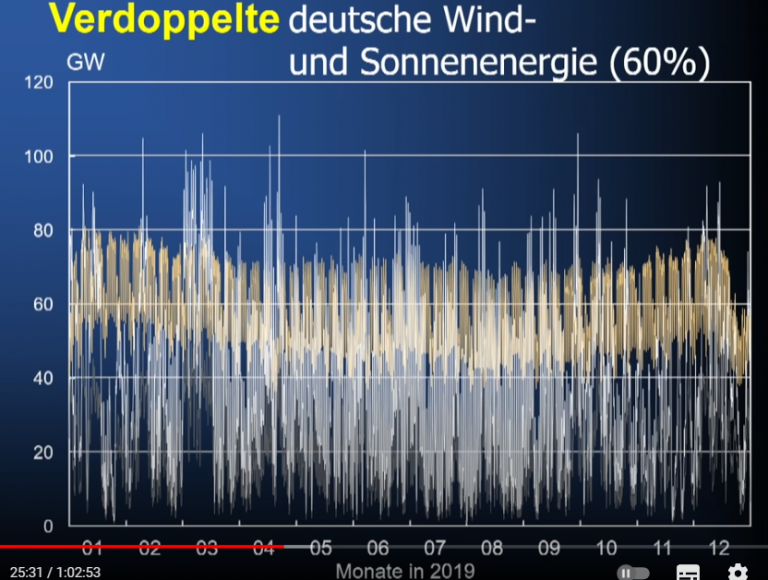 As the chart above shows, a doubling of the 2019 wind and solar capacity would lead to numerous times of severe oversupply and periods of extreme undersupply for Germany’s roughly average 60 GW of demand. Chart cropped here.

“Europe is squeezing out the auto industry and violating the law of ‘one price’. The market as a discovery process to innovate low CO2 technologies is being shut down,” Sinn explains.

Instead of allowing the market to naturally find the best and most efficient solutions, Brussels is simply doing it by decree. In the end, we’ll end up with a failed centrally-planned economy.

Problem No. 5: E-cars are not clean 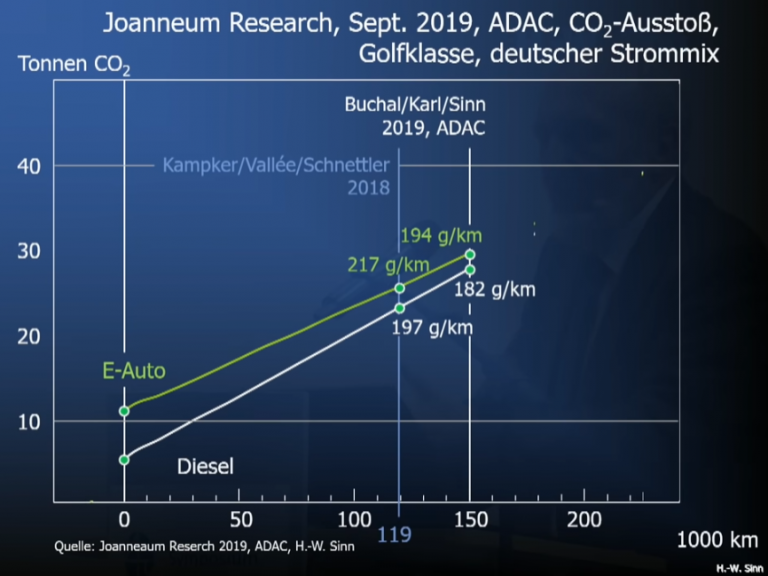 Yet, governments are aiming to force citizens to drive e-cars. In many countries, this will lead to more CO2 emissions, and not less.

Problem No. 6:  Europe going without fossil fuels will have zero global impact

According to Prof. Sinn: “With tradable fossil fuels, Europe going without will not have just a tiny effect, but rather have no effect.”

Whatever fuels Europe opts not to use, other countries will simply burn them instead. As long as global oil production keeps growing, so will CO2 emissions – no matter what Europe does, decrees or decides

Sinn wraps up his presentation with a warning for Europe: “Europe’s unilateralism with climate policy will undermine the competitiveness of its industries, initiate its downfall and thus discourage other countries from following the the European – and especially the German – approach.”