The Alfred Wegner Institute does not see an extreme situation with sea ice in the Arctic (June 2022). The institute’s page states:

The Alfred Wegener Institute Helmholtz Centre for Polar and Marine Research (AWI) is participating again this year with the AWI Consortium Model, a dynamic coupled sea ice ocean model, and calculated a September sea ice extent of 4.75 million square kilometers in its June forecast. This value is about 4% above the median value of all submitted models but in the middle of the predictions given for dynamic models.

Dr. Frank Kauker, a physicist in the Sea Ice Physics Section at AWI, assesses the first prediction as follows: “The first forecast of a year from the beginning of June is usually still characterized by a rather large uncertainty (this year 0.43 million square kilometers). Nevertheless, at the moment there is nothing to indicate an extreme situation in September.

The ice cover in September will be with a great probability in the range of the last years, i.e. between 4 and 5 million square kilometers. The next forecast in early July will reduce the uncertainty somewhat, as it will become clear in June how many melt ponds will have formed, which will then decisively determine the melt rates of the ice during the rest of the year due to their lower solar irradiance return.” 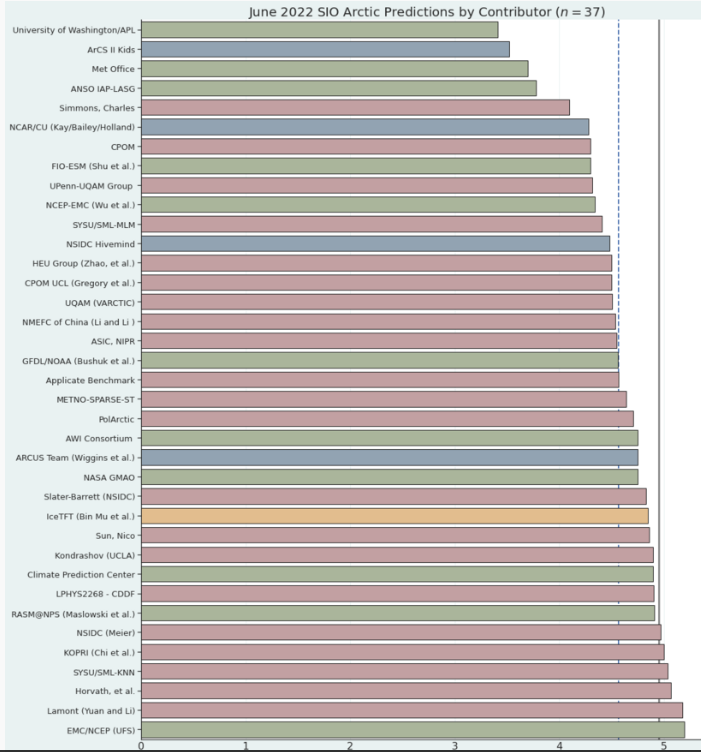