A new study details how a much warmer climate than today led to the disappearance of glaciers and ice caps during the sub-300 ppm CO2 Early to Middle Holocene. The Arctic’s modern ice extent is among the largest of the last 10,000 years.

They compared the current volume and extent of GICs to past Holocene periods when they were either 1) smaller than present or 2) absent, with the latter characterizations signifying greater Arctic warmth. 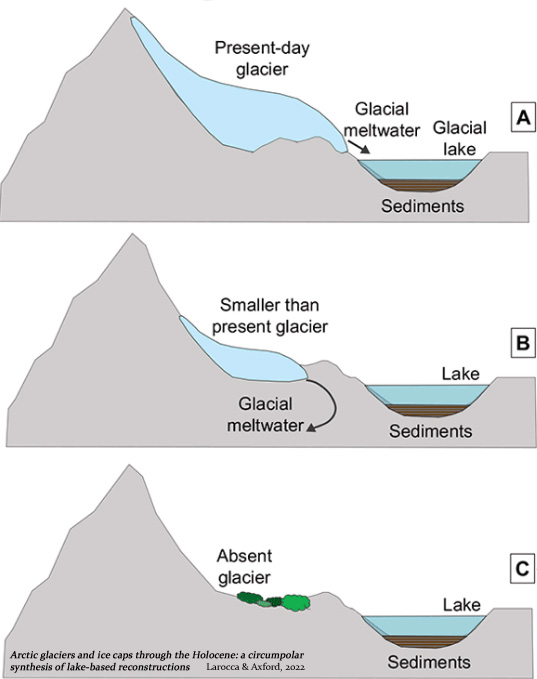 Contrary to the popular view that the modern glacier and ice cap extents are unprecedentedly small or on the verge of disappearing for the first time ever, the authors found more than half the Arctic’s GICs that exist today either did not exist or were smaller than today from 10,000 to 3400 years ago, when atmospheric CO2 ranged between 260 and 270 ppm.

Furthermore, most (“80% or more”) were smaller than today or absent from 7900 to 4500 years ago, which was the peak of this interglacial’s Arctic warmth – multiple degrees Celsius warmer than today.

The following images from the paper document the “Percent of GICs smaller or absent” for each region over the course of the last 10,000 years or more. Notice that between 80% to 100% of GICs were smaller than today or absent from about 8000 and 4000 years ago, and that even the Roman and Medieval Warm Periods had lower GICs extent than today.

The largest glacier and ice cap extent of the Holocene has been realized in the last millennium, suggesting any recession of GICs in the last few centuries is but a partial return to a former period of much greater warmth. 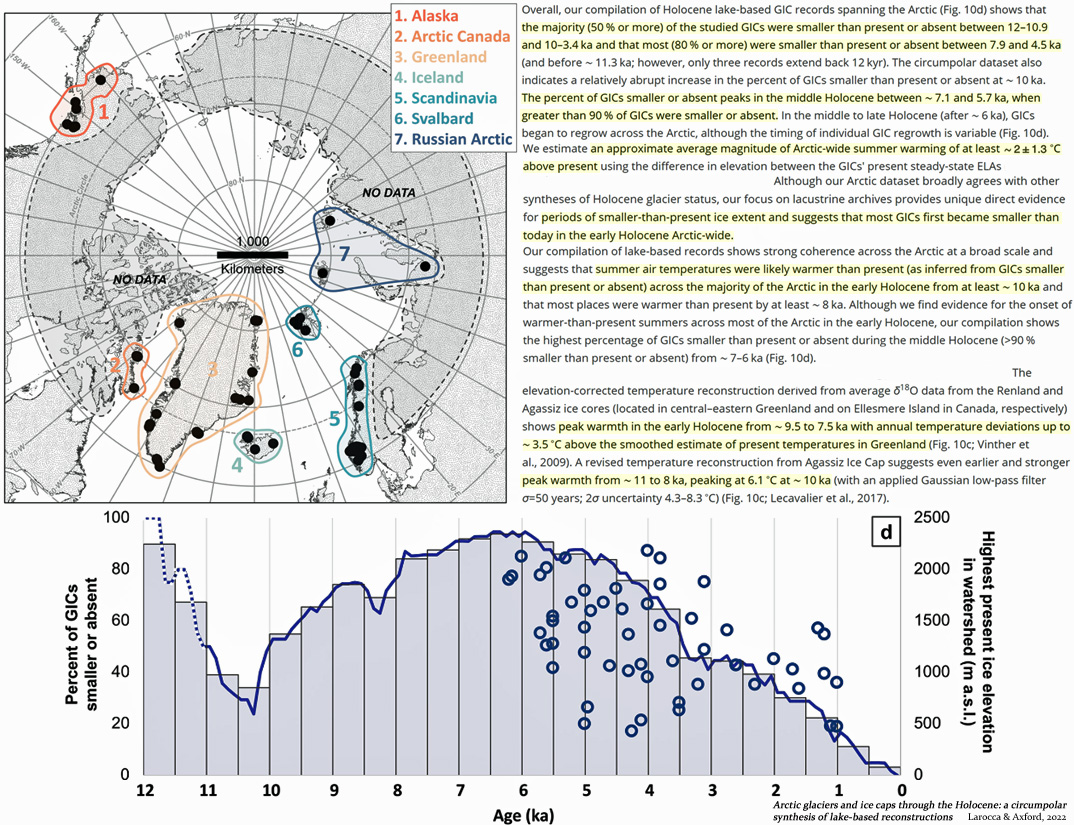 “Glaciers were likely absent altogether between ~7.3 and ~1.3 ka”

“North Ice Cap was smaller than present or absent through most of the Holocene from at least ~10.1 ka to ~1850 CE when the ice-cap reached its present-day size” 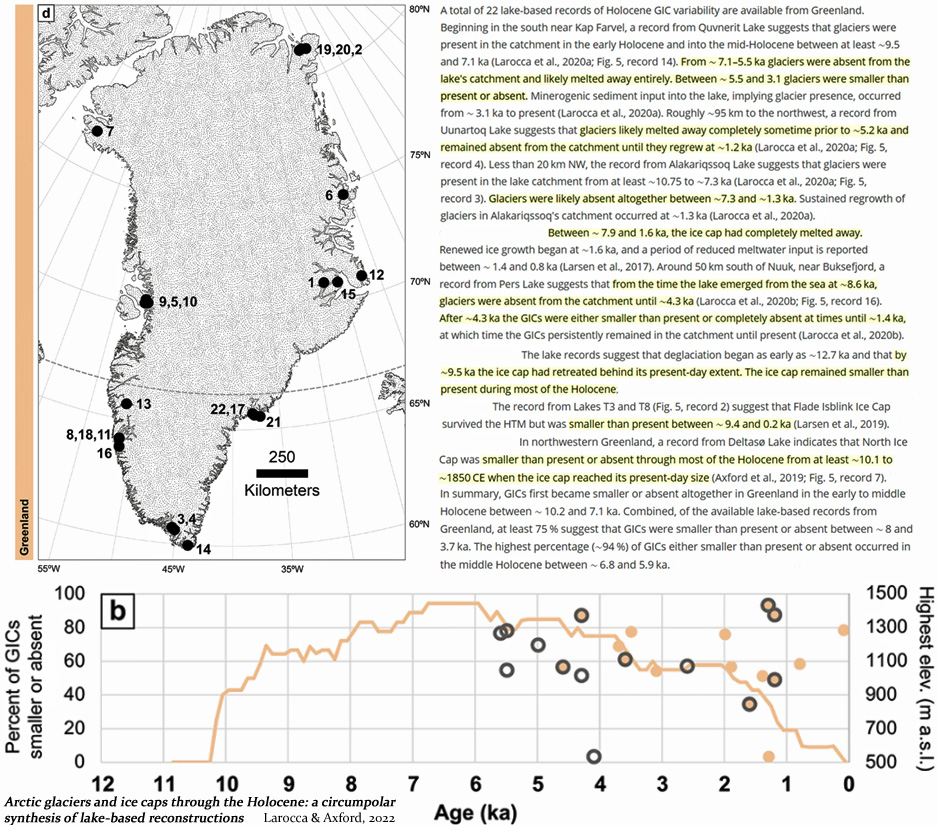 “general warmth, diminished, if not entirely ablated glaciers between ~12.2 and 4 ka” 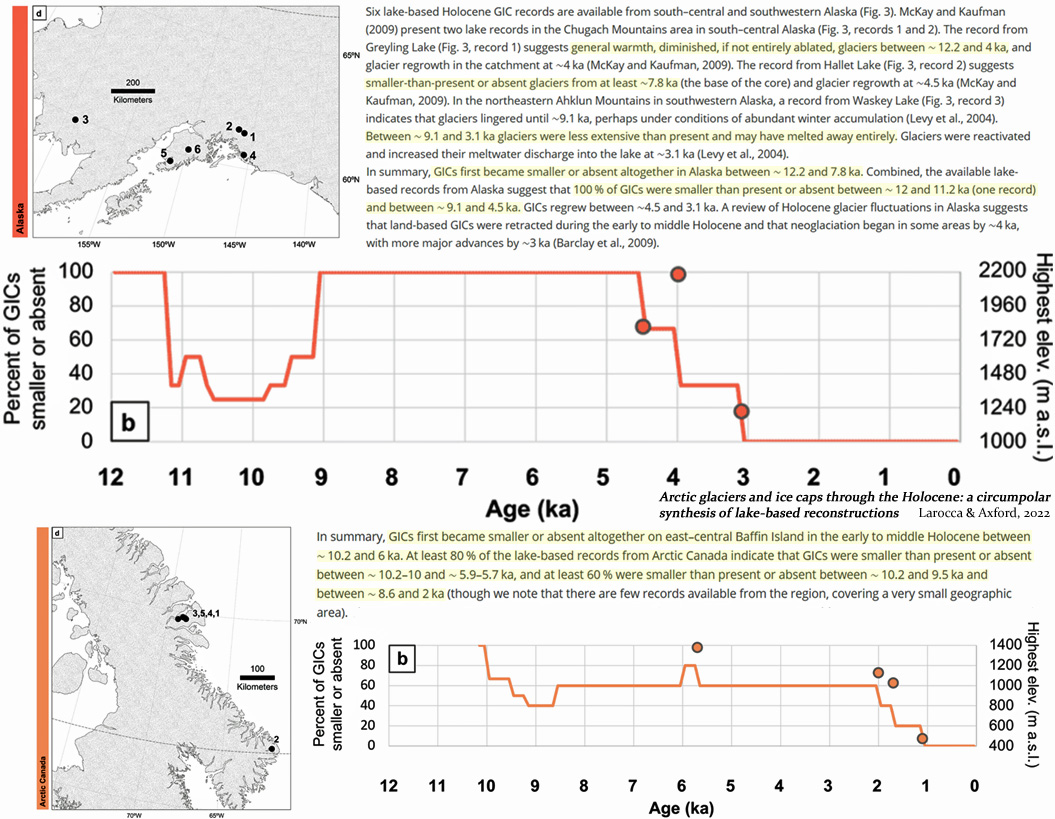 “glacier extent is reported as largest during the last 1000 years”

“the glacier was…absent from the catchment between ~8.6 and 2 ka”

“glaciers were…absent from the catchment between ~10 and 3.1 ka” 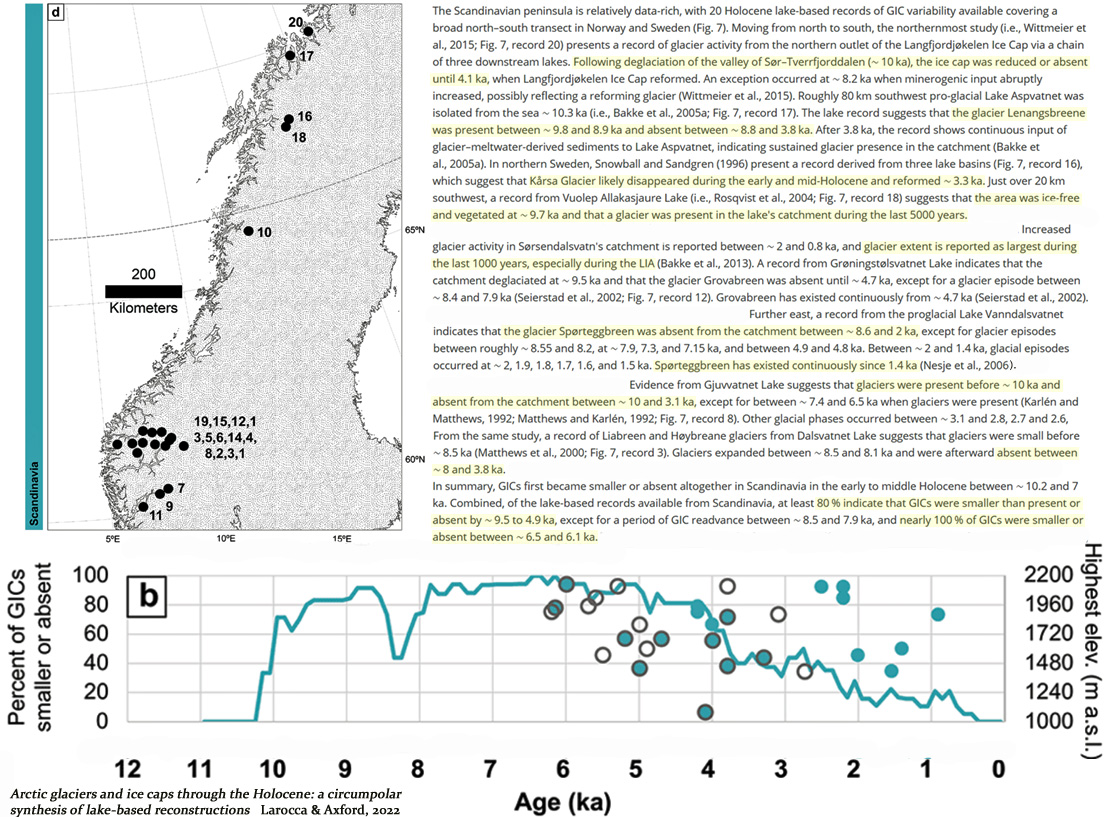 “the glacier…was small or had completely melted away between ~9.2 and 3.5 ka and was smaller than present between ~1.4 and 1.2 ka”

“Between ~8.4 and 1 ka…the glacier was smaller or absent”

“the cirque remained free of ice until the LIA [Little Ice Age] or sometime between 0.6 and 0.4 ka” 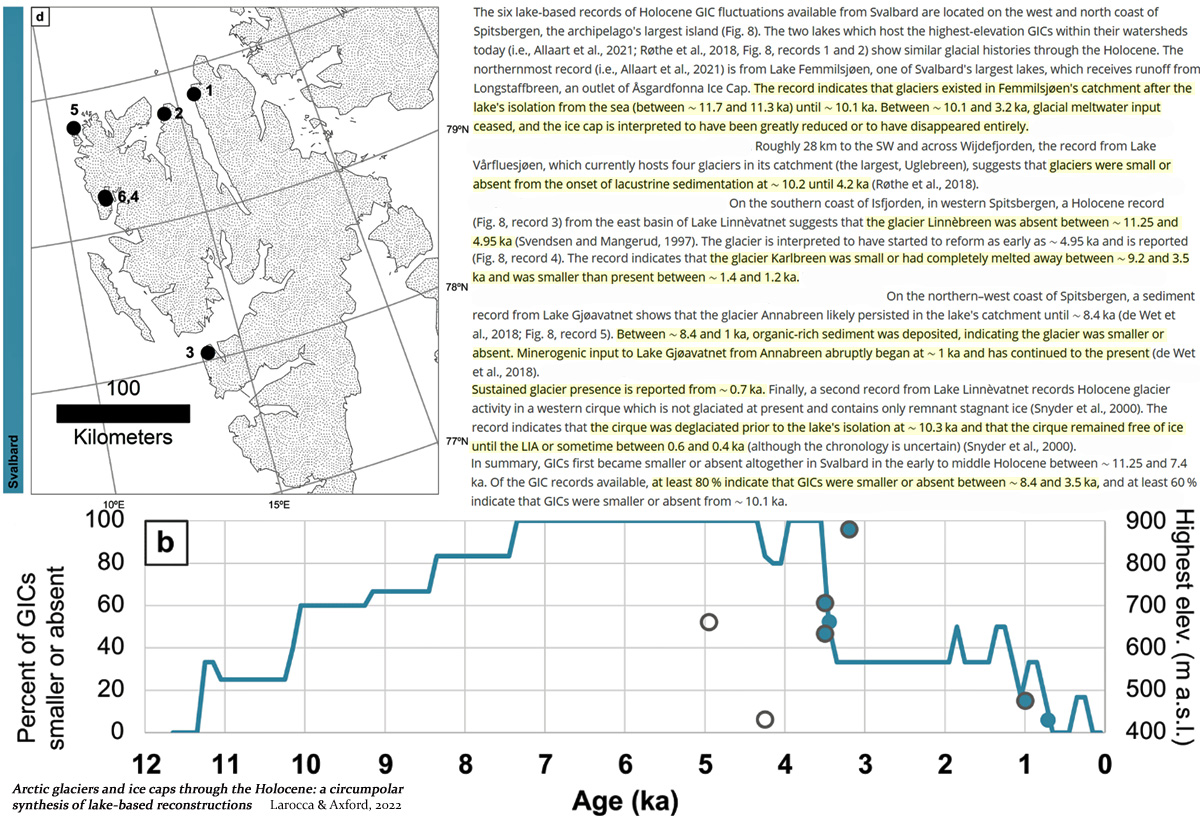 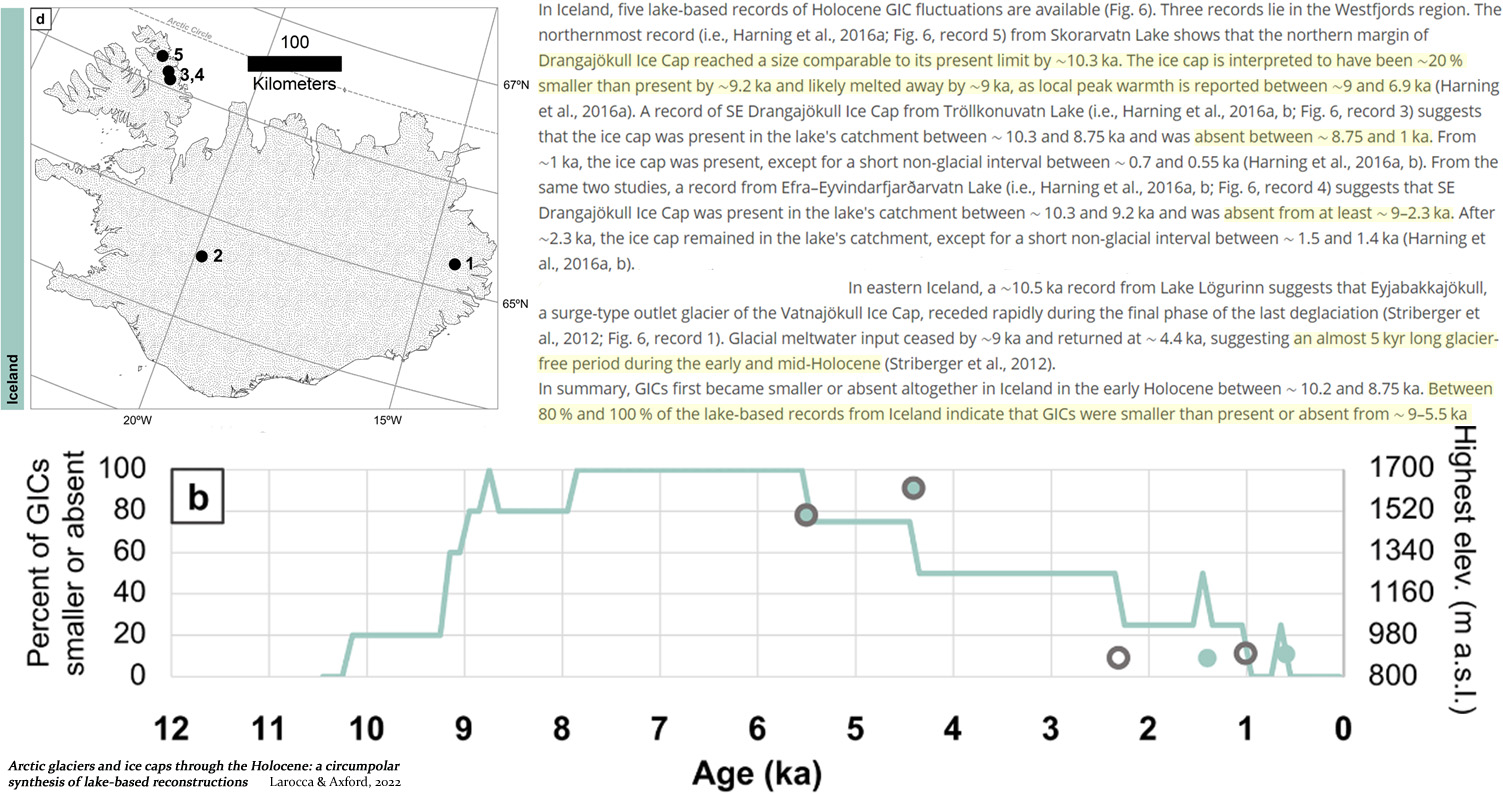 22 responses to “Arctic-Wide Glaciers And Ice Caps Were Absent Or Smaller Than Today From 10,000 To 3000 Years Ago”