The elevated CO2 fertilization effect is driving global greening trends, pushing back deserts, enhancing photosynthesis by 30 to 50%, improving water use efficiency, and boosting crop yields by about 3% every year since 1961.

Recently atmospheric CO2 has been rising at a rate of about 3 ppm per year. While activists claim this is an existential problem for the climate, there will be a critical need for food production as the world population grows by another billion in the coming decades.

The good news heralded by a new study finds gross primary production increased by over 30% over the 2oth century, and the global maize, rice, soybean, wheat yields have increased by ~3% per year since 1961.

There are 2 main reasons for the rapid increase in crop yields in recent decades: “technological progress and CO2 fertilization” (Altimonti et al., 2022). Likewise, the root of the modern global greening phenomenon “pushing back deserts around the world” and improving water-use efficiency is “the increase of atmospheric CO2.”

Another new study documents a 30 to 50% increase in photosynthesis with elevated CO2 (eCO2, 451 to 720 ppm) and a ~25% increase in crop yield. The authors cite results indicating grain yield may increase 54% when CO2 concentrations rise from 400 to 700 ppm. In the study the highest temperatures (21-25°C) were associated with the best yields, whereas the lowest temperatures (<15°C) were linked to the worst yields. 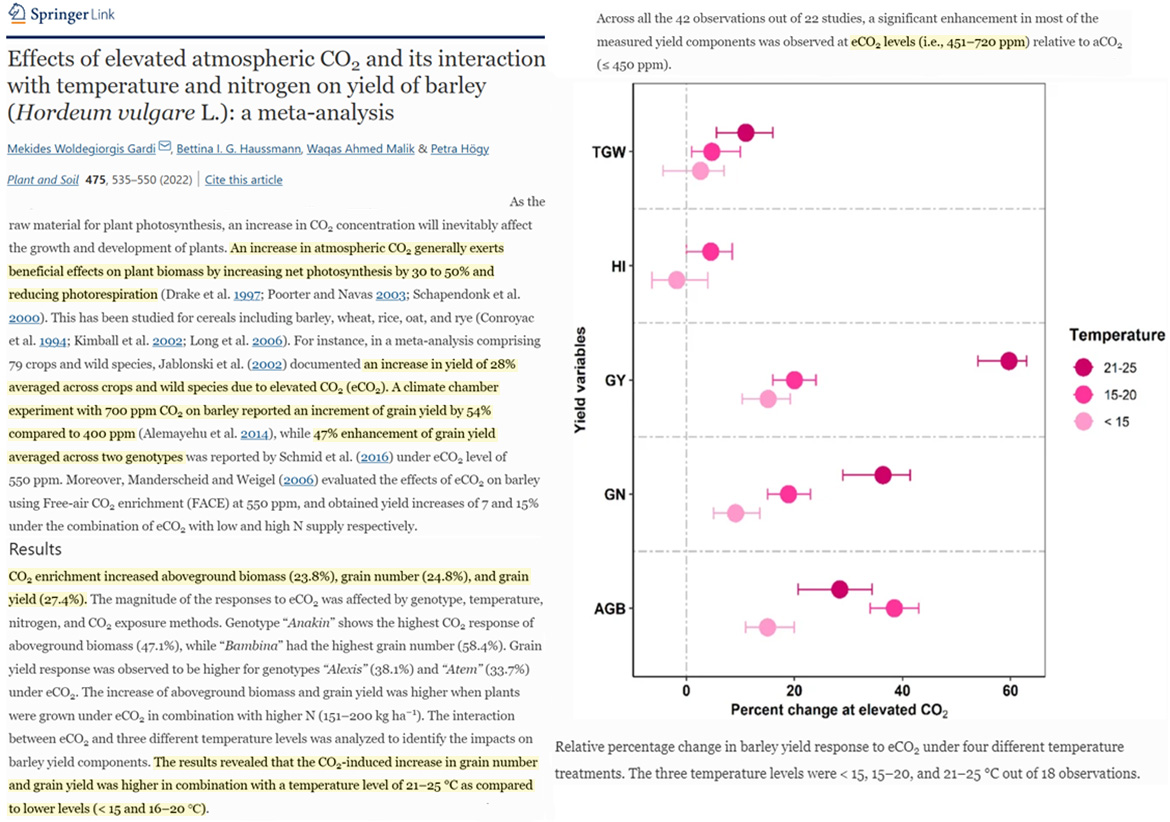 “An increase in atmospheric CO2 generally exerts beneficial effects on plant biomass by increasing net photosynthesis by 30 to 50% and reducing photorespiration (Drake et al. 1997; Poorter and Navas 2003; Schapendonk et al. 2000). This has been studied for cereals including barley, wheat, rice, oat, and rye (Conroyac et al. 1994; Kimball et al. 2002; Long et al. 2006). For instance, in a meta-analysis comprising 79 crops and wild species, Jablonski et al. (2002) documented an increase in yield of 28% averaged across crops and wild species due to elevated CO2 (eCO2). A climate chamber experiment with 700 ppm CO2 on barley reported an increment of grain yield by 54% compared to 400 ppm (Alemayehu et al. 2014), while 47% enhancement of grain yield averaged across two genotypes was reported by Schmid et al. (2016) under eCO2 level of 550 ppm. Moreover, Manderscheid and Weigel (2006) evaluated the effects of eCO2 on barley using Free-air CO2 enrichment (FACE) at 550 ppm, and obtained yield increases of 7 and 15% under the combination of eCO2 with low and high N supply respectively.”

“CO2 enrichment increased aboveground biomass (23.8%), grain number (24.8%), and grain yield (27.4%). The magnitude of the responses to eCO2 was affected by genotype, temperature, nitrogen, and CO2 exposure methods. Genotype “Anakin” shows the highest CO2 response of aboveground biomass (47.1%), while “Bambina” had the highest grain number (58.4%). Grain yield response was observed to be higher for genotypes “Alexis” (38.1%) and “Atem” (33.7%) under eCO2. The increase of aboveground biomass and grain yield was higher when plants were grown under eCO2 in combination with higher N (151–200 kg ha−1). The interaction between eCO2 and three different temperature levels was analyzed to identify the impacts on barley yield components. The results revealed that the CO2-induced increase in grain number and grain yield was higher in combination with a temperature level of 21–25 °C as compared to lower levels (< 15 and 16–20 ℃).”

Another just-published study indicates “wheat yields could be enhanced while crop water use is reduced because of climate change” in the coming decades. Wheat yields dramatically improve in tandem with increases in human CO2 emissions, increasing by 23%, 29%, and 54% for the lowest to highest emissions scenarios, respectively.

“Climate change is a major concern in wheat agroecosystems as it can affect productivity and crop water use. This study used the AquaCrop model to evaluate climate change impacts on the wheat yield, crop water use and water footprint of wheat production in the Middle-Manyame sub-catchment of Zimbabwe. Climate scenarios were based on simulations from the NCC-NorESM1-M, CCCma-CanESM2 and MOHCHadGEM2-ES General Climate Models downscaled using three Regional Climate Models (RCA4, RegCM4 and CRCM5) under two Representative Concentration Pathways (RCP4.5 and RCP8.5). The results showed that, compared to the baseline climate (1980–2010), yield may increase by 22.60, 29.47 27.80, and 53.85% for the RCP4.5 2040 s, RCP4.5 2080 s, RCP8.5 2040 s and RCP8.5 2080 s scenarios, respectively. Crop water use may decrease by 1.68, 1.25, 3.7 and 6.47%, respectively, under the four scenarios, respectively. Consequently, the blue water footprint may decrease by 19, 23, 24 and 38%, respectively, under the four scenarios. Sensitivity analysis attributed the increase in yields and the decrease in crop water use to the CO2 fertilization effect, which had a dominant effect over high-temperature effects. The results suggest that future wheat yields could be enhanced while crop water use is reduced because of climate change.”

Scientists affirm there is “undoubtedly a ‘fertilization effect of CO2′” in improving the growth and yield of fruit trees (Fischer et al., 2022). Plants grow 30% faster with 600-750 ppm CO2, and “1,000 ppm of CO2 will be optimal for the photosynthesis of various plant species”.

“Generally, elevated CO2 (e-CO2) positively affected fruit trees, such as increased photosynthesis, efficient use of water, growth, and biomass. Therefore, in many cases, the yield and the quality of fruits also increased. With an e-CO2 of 600-750 ppm, most C3 plants will grow 30 % faster. A total of 1,000 ppm of CO2 will be optimal for the photosynthesis of various plant species. Fruit trees typically grown in Colombia, such as citrus, grapevines, strawberry, papaya, and pitaya, would benefit from these positive effects, as e-CO2 alleviates stress due to drought and waterlogging. However, the increased growth of fruit trees due to e-CO2 requires more nutrients and water. Thus, selecting genotypes that benefit from e-CO2 and have high efficiency in using nitrogen and water is very important. Ideally, they must have a high sink strength to avoid the accumulation of carbohydrates in the chloroplast. The authors conclude that there is undoubtedly a “fertilization effect of CO2” on fruit species that increases with the advance of climate change. Still, much research is lacking for fruit species compared to many other crops. Hence, future studies are required to measure the direct effects of atmospheric e-CO2 and its interactions with environmental variables such as rainfall, temperature, soil moisture, and nutrient availability.”