United Kingdom rainfall has been increasing over the past two centuries.

Europe saw a dry summer this year and global climate alarmists claimed that droughts are becoming more and more frequent. This is the new normal, they like to claim.

However, a treasure of hard data refute this completely. A recent paper by Hawkins et al published by the Royal Meteorological Society delivers astonishing results tabulated from old, meticulously hand-written observations going back over 300 years. 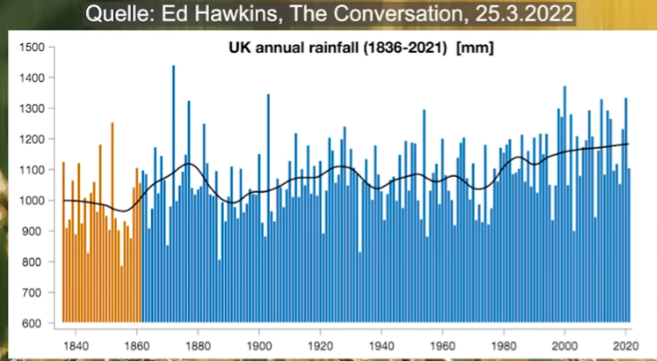 What follows is the paper’s abstract. The key statements are emphasized:

Recovering additional historical weather observations from known archival sources will improve the understanding of how the climate is changing and enable detailed examination of unusual events within the historical record.

Only a small fraction of these observations were previously digitally available for climate scientists to analyse. More than 16,000 volunteer citizen scientists completed the transcription of these sheets of observations during early 2020 using the RainfallRescue.org website, built using the Zooniverse platform. A total of 3.34 million observations from more than 6000 locations have so far been quality controlled and made openly available. This has increased the total number of monthly rainfall observations that are available for this time period and region by a factor of six. The newly rescued observations will enable longer and much improved reconstructions of past variations in rainfall across the British and Irish Isles, including for periods of significant flooding and drought. Specifically, this data should allow the official gridded monthly rainfall reconstructions for the UK to be extended back to 1836, and even earlier for some regions.”

It is truly stunning that such a volume of precious data would go ignored for so long by research institutes that are publicly funded to the tune of tens millions of dollars annually to reconstruct historical climate.

Now that it has taken 16,000 volunteers to come in and do this work, we have since gained a much clearer picture of the UK’s past climate. Some of the results are interesting, if not surprising, especially in terms of all the doomsday drought claims having been made lately.

The driest year on record didn’t happen recently, but in the year 1855. Moreover, as the chart above shows, the trend has been wetter, and not drier. Rainfall has averaged 10% more than recently then in the mid 19thcentury.

The dry years seen since 1950 turn out to be nothing out of the ordinary.