The Pacific Ocean is 5 to 6 km deep. New research indicates the bottom half (2 km to the bottom) of the Pacific has been robustly cooling since 1993.

Most OHC records only extend to the first 2 km of the ocean. Analyses of trends in the deeper ocean indicate intensified cooling from 2 km to the abyssal waters, or for well more than half the Pacific Ocean’s volume. 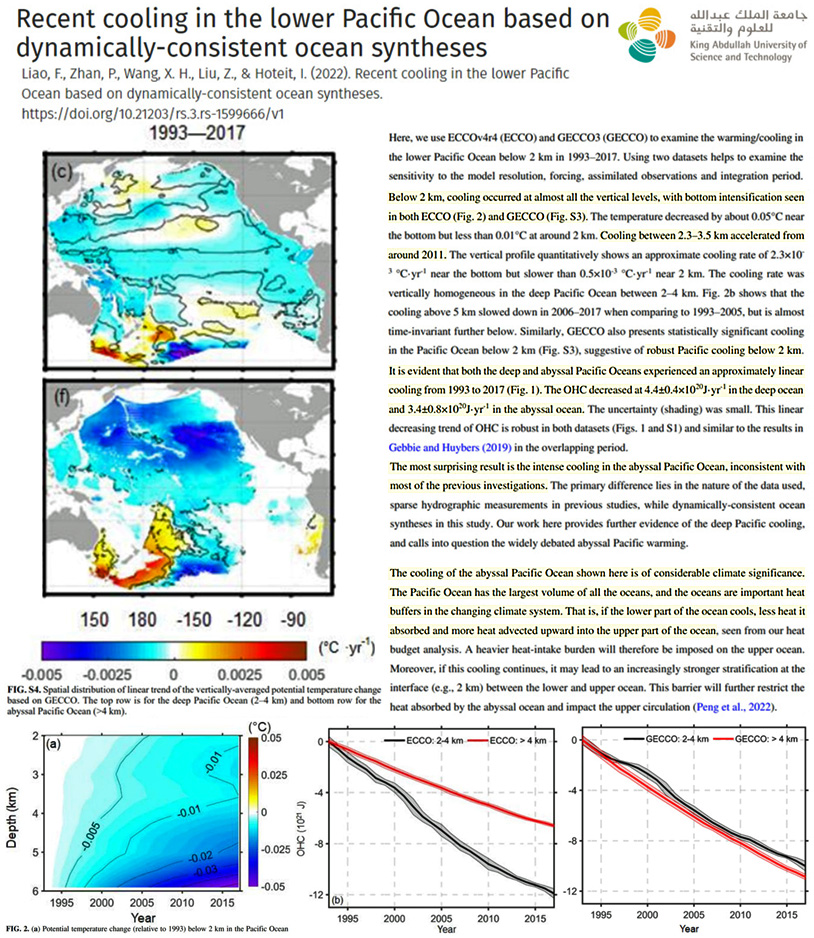 “The thermal state from 1993–2017 in the lower Pacific Ocean (below 2 km) was investigated using two dynamically-consistent syntheses. We show a robust and bottom-intensified cooling. This Pacific cooling is mainly determined by the meridional heat exchange with the Southern Ocean and the vertical heat advection.”

“Below 2 km, cooling occurred at almost all the vertical levels, with bottom intensification seen in both ECCO (Fig. 2) and GECCO (Fig. S3). The temperature decreased by about 0.05°C near the bottom but less than 0.01°C at around 2 km. Cooling between 2.3–3.5 km accelerated from around 2011. The vertical profile quantitatively shows an approximate cooling rate of 2.3×10-3°C·yr-1 near the bottom but slower than 0.5×10-3 °C·yr-1 near 2 km. The cooling rate was vertically homogeneous in the deep Pacific Ocean between 2–4 km. Fig. 2b shows that the cooling above 5 km slowed down in 2006–2017 when comparing to 1993–2005, but is almost time-invariant further below. Similarly, GECCO also presents statistically significant cooling in the Pacific Ocean below 2 km (Fig. S3), suggestive of robust Pacific cooling below 2 km.”

Another recent study (Gebbie and Huybers, 2019) also reported the deeper ocean cooling has been ongoing throughout the modern period in the Pacific, and it has only modestly changed course (from cooling to warming) in the Atlantic in the last century. The Medieval Warm Period was considerably warmer than modern at these depths. 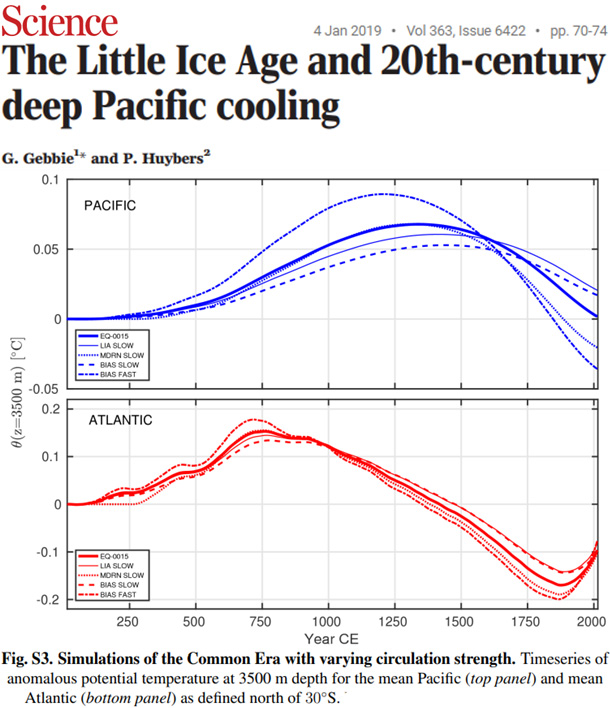