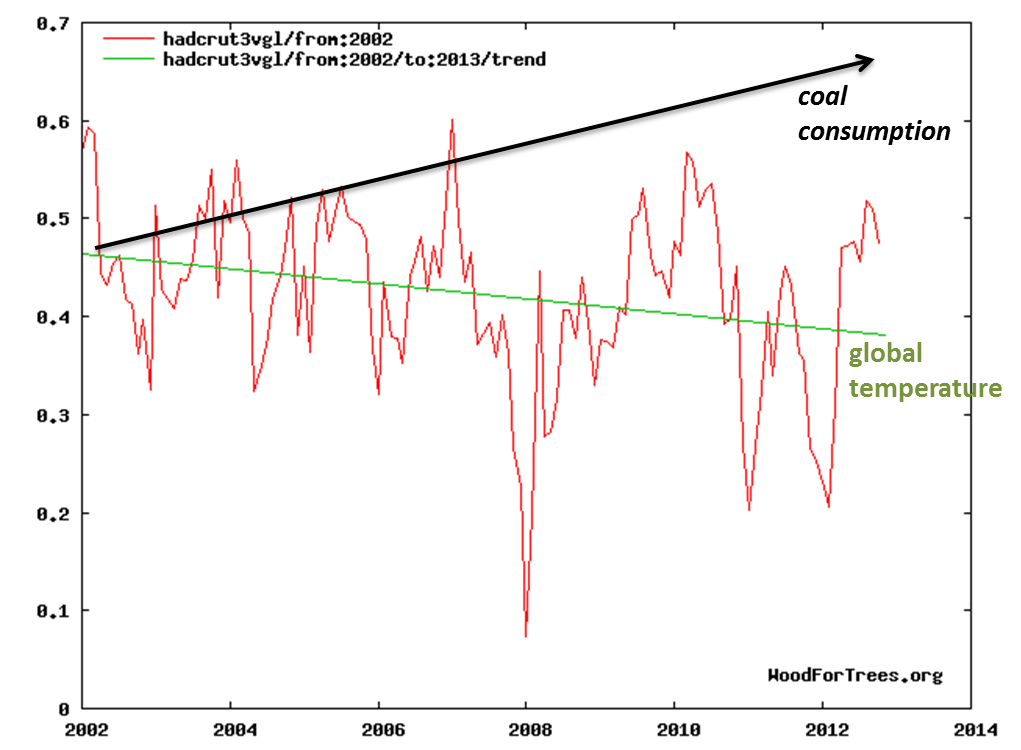 While coal consumption has “risen rapidly” over the last decade, the linear global temperature trend has dropped at a rate of 0.7°C/century! Source: woodfortrees.org.

Coal’s share of the global energy mix continues to rise, and by 2017 coal will come close to surpassing oil as the world’s top energy source, the International Energy Agency (IEA) said today as it released its annual Medium-Term Coal Market Report (MCMR).

The IEA expects that coal demand will increase in every region of the world except in the United States, where coal is being pushed out by natural gas.

“Thanks to abundant supplies and insatiable demand for power from emerging markets, coal met nearly half of the rise in global energy demand during the first decade of the 21st Century,” said IEA Executive Director Maria van der Hoeven. “This report sees that trend continuing.

In fact, the world will burn around 1.2 billion more tonnes of coal per year by 2017 compared to today – equivalent to the current coal consumption of Russia and the United States combined. Coal’s share of the global energy mix continues to grow each year, and if no changes are made to current policies, coal will catch oil within a decade.”

China and India lead the growth in coal consumption over the next five years. The report says China will surpass the rest of the world in coal demand during the outlook period, while India will become the largest seaborne coal importer and second-largest consumer, surpassing the United States.

The report notes that in the absence of a high carbon price, only fierce competition from low-priced gas can effectively reduce coal demand. “The US experience suggests that a more efficient gas market, marked by flexible pricing and fueled by indigenous unconventional resources that are produced sustainably, can reduce coal use, CO2 emissions and consumers’ electricity bills, without harming energy security,” said Ms. van der Hoeven. “Europe, China and other regions should take note.”

She noted that the report’s forecasts are based on a troubling assumption, namely, that carbon capture and sequestration (CCS) will not be available during the outlook period. “CCS technologies are not taking off as once expected, which means CO2 emissions will keep growing substantially. Without progress in CCS, and if other countries cannot replicate the US experience and reduce coal demand, coal faces the risk of a potential climate policy backlash,” she said.

As US coal demand declines, more US coal is going to Europe, where low CO2 prices and high gas prices are increasing the competitiveness of coal in the power generation system. This trend, however, is close to peaking, and coal demand by 2017 in Europe is projected to drop to levels slightly above those in 2011, due to increasing renewable generation and decommissioning of old coal plants.

Amid concern about the impact of Chinese uncertainty on coal markets, the report offers a Chinese Slowdown Case. This scenario shows that even if Chinese GDP growth were to slow to a 4.6% average over the period, coal demand would still increase both globally and in China – indicating that coal demand is not likely to stop growing even with more bearish economic perspectives.

4 responses to “Good News – Growing Consumption Of Coal Continues To Eradicate Poverty Worldwide – With No Impact On Climate!”