We reported recently about our spectral analysis work of European temperatures [1] which shows that during the last centuries all climate changes were caused by periodic (i.e. natural) processes. Non-periodic processes like a warming through the monotonic increase of CO2 in the atmosphere could cause at most 0.1° to 0.2° warming for a doubling of the CO2 content, as it is expected for 2100.

Fig. 1 (Fig. 6 of [1] ) shows the measured temperatures (blue) and the temperatures reconstructed using the 6 strongest frequency components (red) of the Fourier spectrum, indicating that the temperature history is determined by periodic processes only.

On sees from Fig. 1 that two cycles of periods 200+ years and ~65 years dominate the climate changes, the 200+ year cycle causing the largest part of the temperature increase since 1870.

Fig. 1: Construction of temperatures using the 6 strongest Fourier components (red),  European temperatures from instrumental measurements (blue). It is apparent that only  a 200+ year cycle and a ~65 year cycle play a significant role.

The ~65 year cycle is the well-known, much studied, and well understood “Atlantic/Pacific oscillation” (AMO/PDO).  It can be traced back for 1400 years. The AMO/PDO has no external forcing it is “intrinsic dynamics”, an “oscillator”.

Although the spectral analysis of the historical instrumental temperature measurements [1] show a strong 200+ year period, it cannot be inferred with certainty from these measurements, since only 240 years of measurement data are available. However, the temperatures obtained from the Spannagel stalagmite show this periodicity as the strongest climate variation by far since about 1100 AD.

The existence of this 200+ year periodicity has nonetheless been doubted. Even though temperatures from the Spannagel stalagmite agree well with temperatures derived from North Atlantic sedimentation; and even though the solar “de Vries cycle”, which has this period length, is known for a long time as an essential factor determining the global climate.

A perfect confirmation for the existence and the dominant influence of the 200+ year cycle as found by us [1] is provided by a recent paper [2] which analyses solar activities for periodic processes. 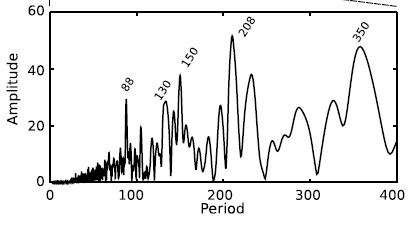 The spectrum Fig. 2  (Fig. 1d of [2]) shows clearly a 208-year period as the strongest variation of the solar activity. Fig. 3 (Fig. 4 of [2]) gives us the solar activity of the past until today as well as the prediction for the coming 500 years. This prediction is possible due to the multi-periodic character of the activity.

The wavelet analysis of the solar activity Fig. 4 (Fig. 1b of [2]) has interesting detail. In spite of its limited resolution it shows (as our analysis of the Spannagel stalagmite did) that the 200+ year period set in about 1000 years ago. This cycle appears, according to Fig. 4, regularly every 2500 years. (The causes for this 2500 year period are probably not understood.)

Fig. 4: Wavelet analysis of solar activity (showing which periods were active at which time). The dominant oscillations (periods between 125 years and 250 years) are clearly recognizable and recurring at 2500 years.

The analysis of solar activity proves the existence and the strength of the 200+ year periodicity which we found from historical temperature measurements, as well as from the Spannagel stalagmite data. This 200+ year cycle is apparently the one known as “de Vries cycle”.

This solar “de Vries cycle together with the AMO/PDO determine practically completely the global climate of the past  (Fig. 1) and the coming time. A significant influence of CO2 on the climate thus has to be excluded. This latter is not surprising in view of the small amount of CO2 in the atmosphere and its weak infrared absorption cross section (also in view of the various proves of NEGATIVE water feedback). 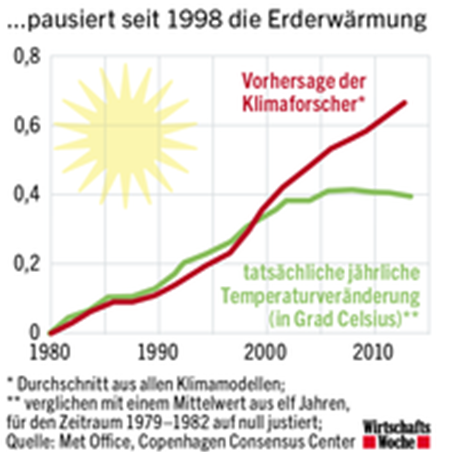 It accounts for the long temperature rise since 1870. One may note, that the stronger temperature increase from the 1970s to the 1990s, which is “officially” argued to prove warming by CO2, is essentially due to the AMO/PDO cycle.