Germany’s electricity price just behind leader Denmark in the EU: Since the introduction of its Feed-in Act in 2000, the electricity price has more than doubled!
By Michael Krüger
(Translated, edited by P Gosselin)

Since the EEG renewable Feed-in Act took effect in 2000, it has been promised by green energy proponents time and again that the power price would fall in Germany. So what does the reality look like today? On this subject I have found the news from the Bundesnetzagentur (Federal Network Agency) on the latest power prices in the daily media. 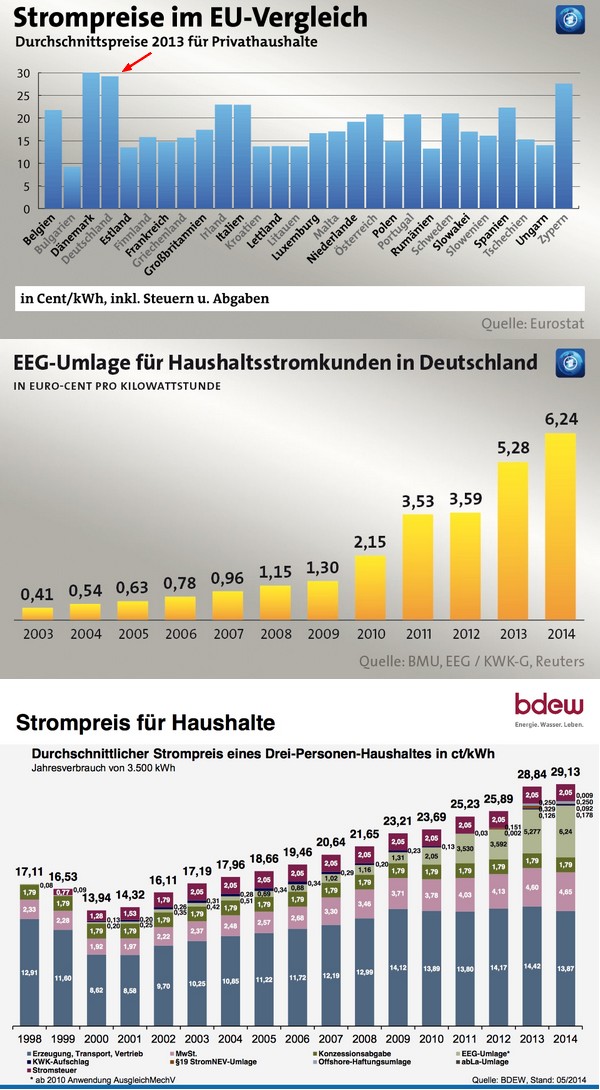 In 2000, when the Feed-in Act was introduced, Germans paid only 13.94 cents per kilowatt-hour, which at the time had hardly changed since German reunification in 1991. After the liberalization of the power market in 1998, the price of power even dropped some. Today, in 2014, the price is now 29.21 cents per kilowatt-hour, i.e. it has more than doubled in 14 years. The cost-driver is the EEG Feed-in Act surcharge, which has risen from 0.41 cents in 2003 to 6.24 cents today. It represents 22% of the cost of a kilowatt-hour.

Moreover, the situation is getting worse as renewable energy continues to expand. Conventional power plants have since become so uneconomical that power plant operators prefer not to build any new ones and to switch off the old ones. New plants are no longer being planned and old power plants are being left on because the federal government has made it illegal to shut them down in attempt to keep the supply intact. Naturally all the added costs ultimately have to be borne by the power consumer.

Renewable energy producers are paid compensation to the full amount – even when their power is unneeded and cannot be fed into the grid because no line is available to feed the power into the grid. This is the case because grid expansion is progressing too slowly to keep up with the expansion of renewable energies. There exists windparks for example, that are located away from any grid feed-in point and are unable to feed in the power. However, the consumer still has to pay for the power they never feed in. Other costs that need to be passed on to the consumer are the expansion of the power grid, which is necessary for transmitting the renewable energy, for example to bring the wind power produced at the North Sea to southern Germany and to deliver solar energy produced in the south to northern Germany.

Another cost driver is the Emissions Certificates Trading introduced for CO2 in 2005. Currently CO2 emission certificates cost about 5 euros per tonne, but were as high as 30 euros. These were costs that naturally got passed on to the consumer. German environmental activist group BUND announced with glee that expected rising costs of emissions trading certificates would add another 2-4 ct/kwh. Super.

Summary: The points listed above have resulted in Germany’s electricity prices more than doubling since 2000. An end to the rising price spiral is nowhere sight despite more promises from the renewable energy proponents. Power consumers in Germany now have to pay almost twice as much as the consumers in neighboring France (which relies heavily on nuclear power) and more than double than consumers in the USA. The EEG renewable energy Feed-in Act does not decrease the prices, rather it causes them to skyrocket. It is only a question of time as to how long Germany can keep this up.

Proponents of renewable energy often like pointing to the social costs of conventional energy, but they ignore the social costs of renewable energies, which take up lots of natural space, crowd out wildlife and litter the landscape. Then there are the economic costs and social damage that high power costs inflict. Production and jobs move to foreign countries where energy and labor are cheaper.

Electricity is increasingly becoming a luxury

Consumers are seeing less money in their wallets, which in turn impacts buying power. Electricity is increasingly becoming a luxury, and energy poverty is spreading. The number of consumers getting their power shut off is on the rise in Germany. Just in 2011 in Germany, 6 million households (15% of all German households in Germany) were threatened with a power cut-off. The energy supply cut-off to 1 million households had already taken place. The power was turned off for 300,000 households. The trend is upwards.

The blame of course for all the misery gets placed on the evil power companies, grid operators, and the former conservative-free democrat government of the previous years.