So, where’s the warming?

Robin Pittwood at the New Zealand Kiwi Thinker here has posted an update on the climate bet for charity that NoTricksZone and its readers entered with a gaggle of global warming cultists, among them Dana Nuccitelli and Rob Honeycutt.

So far we are 4.5 years into the current decade and Robin tells us that it is running cooler using RSS and UAH satellite data, which Messieurs Honeycutt and Nuccitelli agreed to use. Awhile back in comic fashion devout anthropogenic global warming believer William Connelly even demanded the terms of the bet be changed. So clearly we see panic setting in.

At his latest July 18 Saturday Summary here, Joe Bastardi presented the latest NCEP global temperature chart for the past 10 years, and here more confirmation that the globe has cooled off a bit. 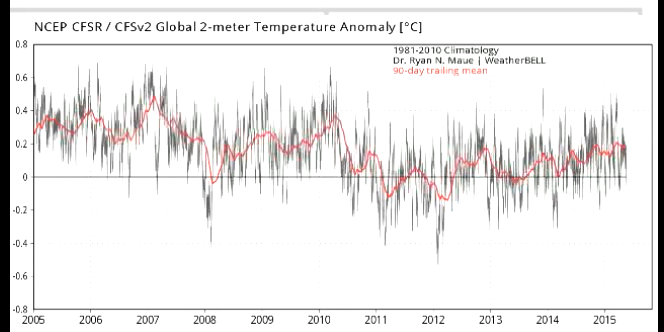 It really is tough to find warming anywhere outside of models. Joe, as polite as he is, is unable to hold back his ridicule of the warming claims.

Of course this year is an El Niño year and so we are going to see the gap close somewhat, or perhaps even see the current decade become a bit warmer than the last – for a little while. But as many readers here are familiar, cool La Niñas typically follow El Niños. Moreover the North Atlantic has turned cool and that will make the battle that much tougher for those betting on a warmer current decade.

Even if the warmists somehow did manage to pull it off, the trend would end up being far below what the models predicted and so it would be a very hollow victory that we could all live with.