We already know that solar energy refuses to show up for work at night and also for the most part when it’s cloudy or wintertime. Green energy proponents like to tell us that when the sun is AWOL, we can always switch to wind. The wind, after all, is always blowing somewhere, they like to tell us. Unfortunately that is so far from the truth.

The following chart shows Germany’s wind energy output (shaded blue) over the past 7 days compared to the power consumed (curve). As one can see, the country’s 40 GW of installed capacity has gone into the habit of taking afternoon siestas, right when power demand is at a high, delivering a sorrowful a pittance. 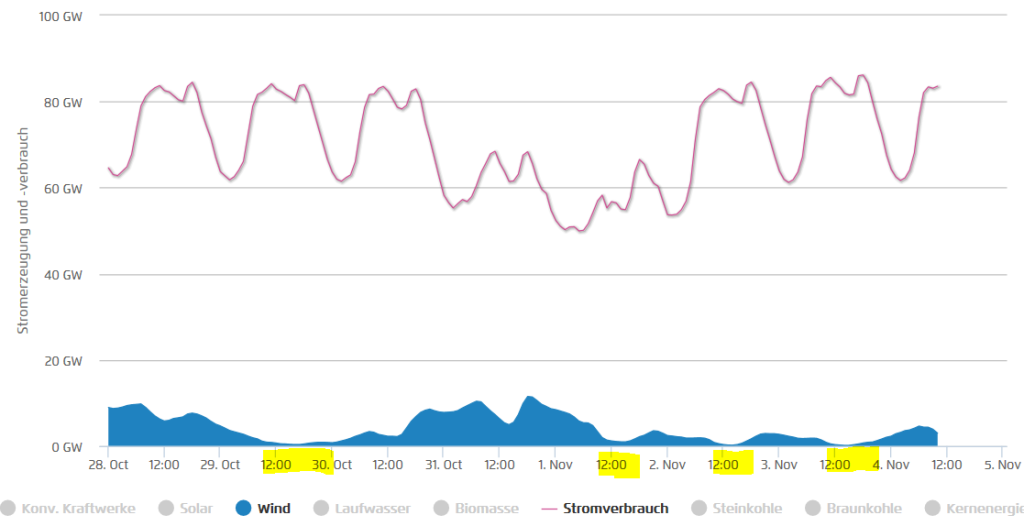 Germany’s 40 GW of installed wind power capacity took afternoon siestas 4 times over the past 7 days (marked yellow). So far this month German wind power has failed to deliver even 10% of its rated capacity. Chart source: Agora.

Yesterday early afternoon the 40 GW of installed capacity managed to deliver a puny 0.168 GW, or only 0.4% of its installed rated capacity. That’s like 4 people showing up for work in a company of 1000 employees.

According to Wikipedia here, Germany’s wind turbines have barely put out over just 17% of their installed rated capacity over the period of 2001 – 2013. But that’s the least of wind’s problem. The big headache is the energy’s unpredictability and its wildly fluctuating supply. Often the wind blows when you don’t need the power, or it just doesn’t show up when you could really use it, like midday. Good thing that there are still the reliable coal, nuclear and fossil plants on line.

But the energy can be stored! Wrong. The technology for the scale of storage that is needed to keep a grid running smoothly does not exist. and there are no signs that it will anytime soon. Yet the mad rush to install the siesta-prone energy continues unabated.