‘Greenhouse’ Difference Between CO2 And Air

Below is a very abridged quoted summary of a new scientific paper published by Dr. Thomas Allmendinger, a physicist (chemistry, quantum mechanics) who uses a real-world experiment to document a glaring lack of empirical support for the position that CO2 is a dominant agent of atmospheric warming.

One-sentence summary: Shortwave radiation heats both CO2 and air only up to a limited temperature threshold, and there is no observed difference between the heat absorption/emission of  air vs. CO2. 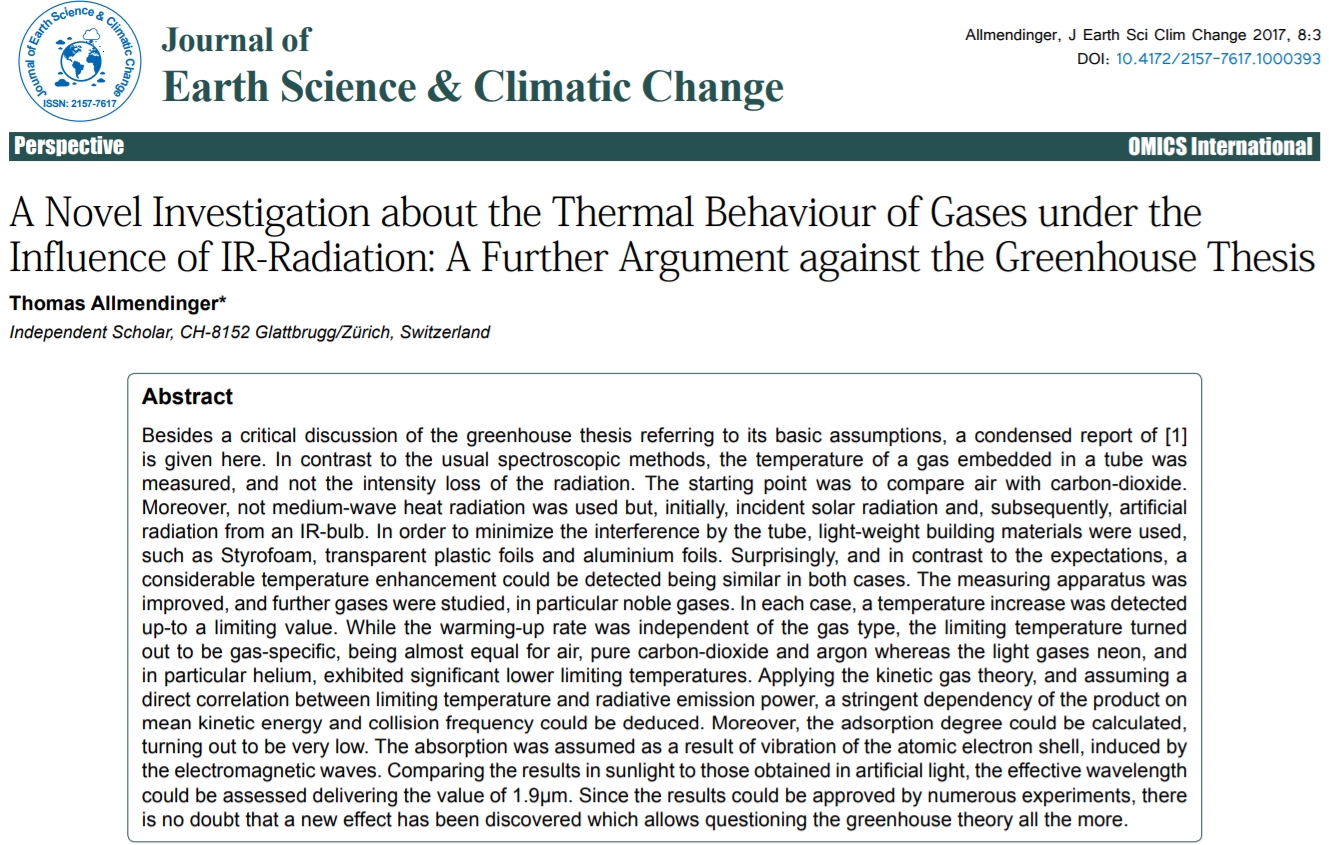 The starting point of the here referenced research was the generally accepted greenhouse thesis which assumes that the present climate change is mainly due to the observed growing amount of the so-called greenhouse gases in the atmosphere, particularly of carbon-dioxide in spite of the fact that, unlike a greenhouse, the Earth atmosphere doesn’t exhibit a transparent roof …  This [greenhouse effect] idea takes its source in Fourier’s treatise made in 1827, exhibiting no empirical data or physical calculations and experimental data.

[O]verall, the greenhouse thesis has been commonly settled even if […] its empiric basis appears poor while several theoretical presumptions are speculative.  … there is reason enough to examine the current climate theory, and in particular the greenhouse thesis, regarding fundamental scientific principles and possibly to question the usual assumptions.

The analytic methods applied in climatology were exclusively photometric [light-measuring] ones. … Thermal measurements have never been made, except those by pyranometers comprising the whole spectrum, so that direct coherences between light absorption and warming-up effects at matter have not been detected yet.

The natural laws which were used for constructing the theory were confined to the temperature law of Stefan-Boltzmann (1), Planck’s distribution law (2), both being solely valid for black bodies, and BeerLambert’s absorption law (3), being unequivocally valid solely for visible light, and not compellingly for IR radiation (see below). These laws were often impermissibly generalized and used in an incorrect way leading to wrong conclusions.

[A]ccording to this [greenhouse theory] model the assumption is made that any warming-up of the atmosphere is exclusively due to a partial absorption of medium-wave IR-radiation while any short-wave IR-absorption can be excluded since it has never been detected spectrometrically.

Against this, at least the following [5] arguments may be alleged [just the 1st , 4th, and 5th arguments are included here in very condensed form]:

1. As already found within a previous investigation [12], the greater part – namely at least 60% – of the energy being emitted from a warmed plate to the surrounding atmosphere is transferred by heat conduction, and not by heat radiation [i.e., via the greenhouse effect] obeying Stefan-Boltzmann’s law which is only valid in the vacuum. That part is even enhanced when the air convection is enhanced. Moreover, near the ground the molar concentration of water vapour is much higher than that one of carbon dioxide letting assume that its absorbance of heat radiation is much stronger. (e.g. at 20°C and 60% rel. humidity, the molar concentration of water vapour is 36 times larger than that one of carbon-dioxide being 0.038 volume%). Hence it can be assumed that the major part of the heat transfer between Earth surface and atmosphere occurs near the ground while the greenhouse theory neglects that part solely regarding the radiative absorption by CO2 passing the whole atmosphere.

4. Between the energetic absorption of electromagnetic radiation by gases and their resulting warming-up no empirical – and also no
theoretical – coherence is known which would be needed to carry spectroscopic results onto thermodynamic properties. There is no good reason to assume that absorbed IR-radiation will be entirely transformed into heat. Rather it is conceivable that a part of it is re-emitted, to wit in all directions. But the link between the two phenomena is not known.

5. The question of radiation emission by hot gases is related with it since it is obvious that any gas, also air, begins to radiate to such an extent as it is warmed-up. This question arises when the so-called radiative energy transfer is studied. But instead of empiric measurements, complicated theories were developed [15-17] starting from the abstruse assumption that the atmosphere behaves like a black body obeying Stefan-Boltzmann’s emission law, and disregarding the kinetic gas theory.

Overall it must be assessed that the atmospheric theory is on a shaky ground. widely missing empiric key methods to check the principles and their consequences.

Air Vs. CO2 Experiment: ‘The Final Proof That The Climate Theory Cannot Be True’

Beyond, there is an aspect which hitherto has been overlooked, and which delivers the final proof that the climate theory cannot be true. It is the topic of the here reported author’s work [Allmendinger, 2016] concerning thermal measurements instead of spectroscopic ones, and delivering the evidence that any gas absorbs IR-radiation – but in the short wavelength range -, with the consequence that air is warmed up by direct solar insolation – as well as by artificial IR-light – up to a limiting temperature due to radiative emission, and leading to an equilibrium state.

Preliminary tests for the present investigation were made with solar light using square twin-tubes from Styrofoam (3 cm thick, 1 m long, outer diameter 25 cm), each equipped with three thermometers at different positions, and covered above and below by a thin transparent foil (preferably a 0.01 mm thick Saran-wrap). The tubes were pivoted on a frame in such a way that they could be oriented in the direction of the solar light (Figure 3). One tube was filled with air, the other with carbon-dioxide. Incipiently, the tubes were covered on the tops with aluminium-foils being removed at the start of the experiment.

The primary experimental result was quite astonishing in many respects.

Firstly: The content gases warmed within a few minutes by approximately 10°C up to a constant limiting temperature. This was surprising – at least in the case of air – for no warming-up was anticipated since sunlight is colourless and allegedly not able to absorb any IR-radiation. However, the existence of a limiting temperature is conceivable since a growing radiative emission has to be expected as far as the temperature rises.

Secondly: The limiting temperatures were more or less equal at any measuring point. This means that the intensity of the sun beam was virtually not affected by the heat absorption in the gas tube since the latter one was comparatively weak.

And thirdly: Between the two tubes [one filled with air, the other with CO2] no significant difference could be detected.  Therefore, thanks to this simple experiment a special effect of carbon dioxide on the direct sunlight absorption could already be excluded.

As evident from Figure 8, any gas absorbs IR-light – even the noble [non-greenhouse] gases argon, neon and helium do so – while there is no significant difference between argon and carbon dioxide, but only a small difference between carbon-dioxide and air. 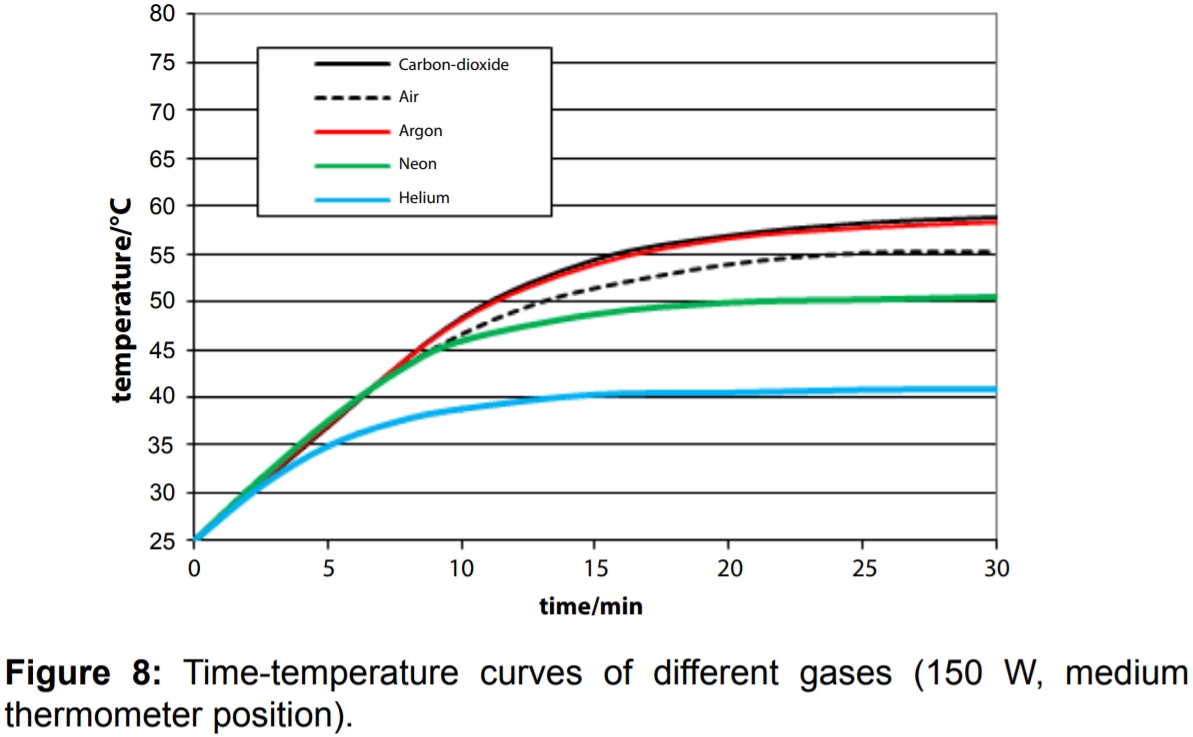 Besides a critical discussion of the convenient atmosphere theory profoundly questioning the greenhouse thesis by disclosing several basic errors, the here reported investigation reveals the discovery of direct absorption of shortwave IR-radiation by air. It is part of the incident solar light, but also of artificial light which enables a more exact detection. It is caused by another effect than the one which is responsible for the longer-wave absorption being observed at carbon dioxide, and it is not detectable by IR-spectroscopy since its absorption coefficient is too low. However, it is clearly detectable by means of the here applied apparatus leading to a distinct temperature elevation up to a limiting temperature which depends on the radiative emission. The limiting temperature depends on the gas kind, whereby practically no difference between air and carbon-dioxide could be found.

Nevertheless, that direct absorption effect [shortwave] which was discovered thanks to this method probably contributes significantly to the warming up of the atmosphere while the warming-up due to carbon-dioxide can be neglected.

But since the direct absorption cannot be influenced, the surface albedo must be focused as the governing factor providing the only [anthropogenic] opportunity to mitigate the climate, or at least the microclimate, by changing colour and structure of the surface, particularly in urban areas. However, a prediction seems not feasible since the global climate is too complex. But the greenhouse theory turns out to be a phantasm delivering the wrong diagnosis for the climate change, and a wrong diagnosis cannot enable a healing.