Greenland Melt The Ice Sheet From Bottom Up 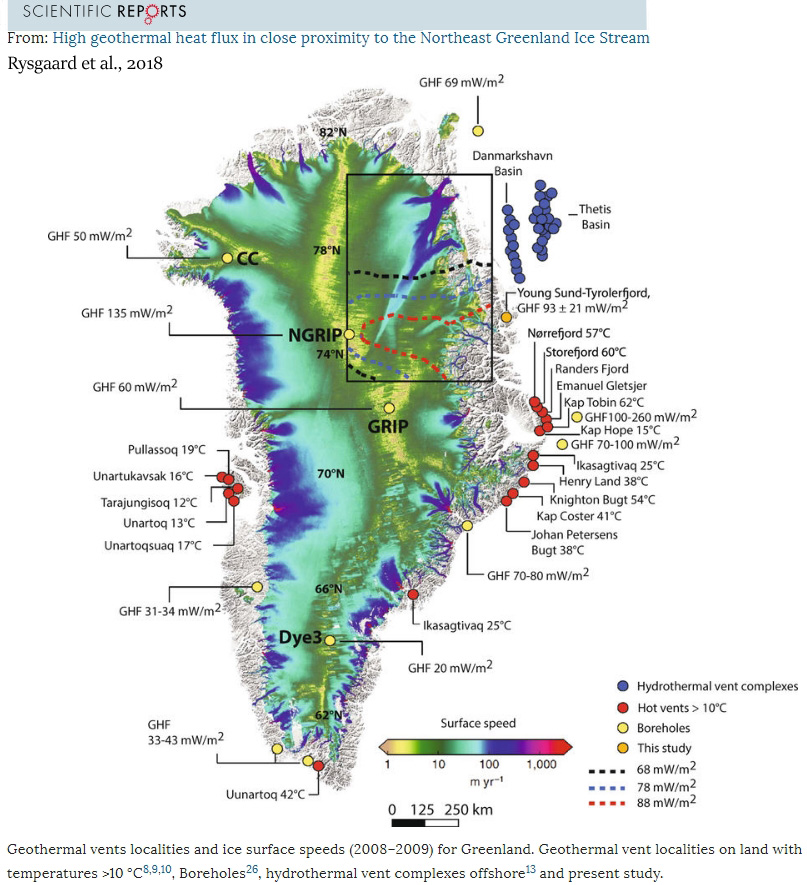 A few years ago, 10 glaciologists publishing in the journal Nature Geoscience asserted that “large parts of the north-central Greenland ice sheet are melting from below” due to high geothermal heat flux forcing (Rogozhina et al., 2016).

Water temperatures of these natural hot springs reach into the 60°C (140°F) range, and there are “several thousands“ of them “all over Greenland“, with observations of high geothermal heat/ice-melt locations spanning the East, West, North, South, and Central regions of this glaciated island.

Consider that over the last 50 years the global oceans are alleged to have warmed by “only about 0.1°C” in total (Bereiter et al., 2018).  That’s a change of one-tenth of one degree Celsius over 5 decades that climate scientists sympathetic to the anthropogenic global warming (AGW) cause claim could be heavily responsible for the change in Greenland’s glaciated landscape.

Compare this tiny 50-year accumulation of thermal change to the range or variations in the natural, on-the-path-to-boiling heated water source directly beneath the Greenland Ice Sheet.

Interestingly, the role of anthropogenic CO2 emissions in Greenland’s glacier dynamics is not mentioned in the paper.

(g) And now it has been determined that the regional locations where warming and ice-melt has occurred on the Greenland Ice Sheet can be primarily attributed to high geothermal heat flux forcing.

The scientific evidence continues to accumulate supporting the position that the Greenland Ice Sheet has not been following the modeled expectations of the anthropogenic global warming narrative.

to the Northeast Greenland Ice Stream

“The Greenland ice sheet (GIS) is losing mass at an increasing rate due to surface melt and flow acceleration in outlet glaciers. … Recently it was suggested that there may be a hidden heat source beneath GIS caused by a higher than expected geothermal heat flux (GHF) from the Earth’s interior. Here we present the first direct measurements of GHF from beneath a deep fjord basin in Northeast Greenland. Temperature and salinity time series (2005–2015) in the deep stagnant basin water are used to quantify a GHF of 93 ± 21 mW m−2 which confirm previous indirect estimated values below GIS. A compilation of heat flux recordings from Greenland show the existence of geothermal heat sources beneath GIS and could explain high glacial ice speed areas such as the Northeast Greenland ice stream.”

• “Geothermal springs with source water temperatures above 0 °C have been found all over Greenland, especially around Disko Island in West Greenland, where several thousands of such springs have been identified.”

• “However, the hottest springs, with source water temperatures of 55-62 °C are found in East Greenland at a number of locations north and south of Scoresbysund.”

• “Combining our measurements with other sites of reported geothermal activity around Greenland clearly shows that East Greenland is a hotspot. Several hot vents exist on land, with temperatures ranging from 15 to 62 °C and a tendency to increase northeastwards.” 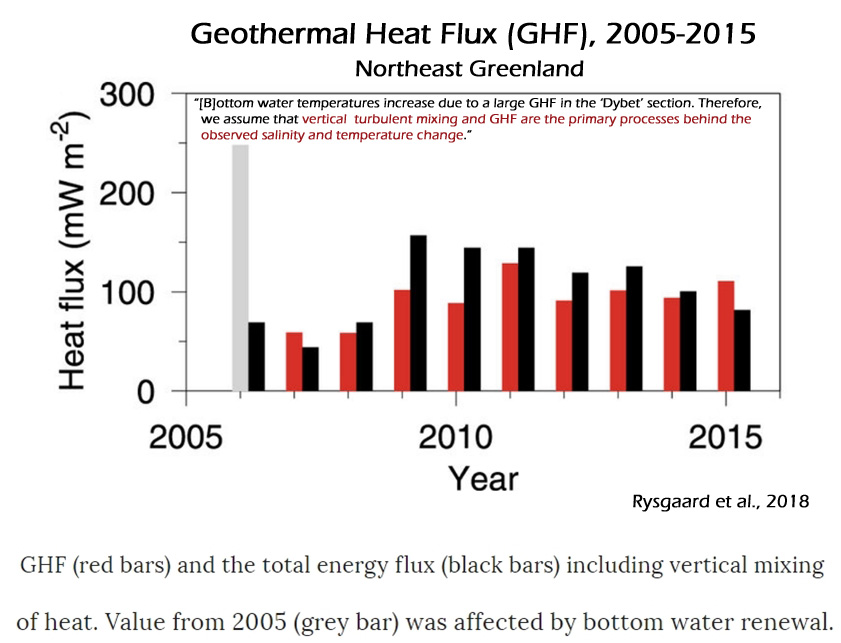 • “High glacier surface speeds and negative mass balance are also observed near other hot vents in West Greenland such as the Jakobshavn Isbræ (69°N) near Disko Island;”

• “[I]n East Greenland the Helheim glacier, Isertoq and Mittivakkat glaciers located near Ikasagitavaq (66°N) are losing mass, and high ice speed is also observed at the Kangerdlugssuaq glacier where a GHF [geothermal heat flux] of 70–80 mW m−2 has been recorded (68°N).”

• “A GHF anomaly of up to 88 mW m−2 was modeled to be located at the head of the 750-km-long Northeast Greenland ice stream.  … Our recorded GHF of 93 mW m−2 in the Young Sound-Tyrolerfjord is located in this GHF hotspot and supports their model results. Hence, this part of Greenland may play a role for the rapid basal melt located at the head of the Northeastern Greenland ice stream and its high ice speeds.”